Round 11: Ben Seck vs. Albertus Law

With the winner of this game assured of a berth in the Top 8 due to an ID in one of the next two rounds there was a lot riding on this match. The two had drafted next to each other in the draft with Seck in seat 1 and Law in seat 2 and Seck had slid into black after Law had made clear his intentions to be a black mage. There is a description of Law's draft. 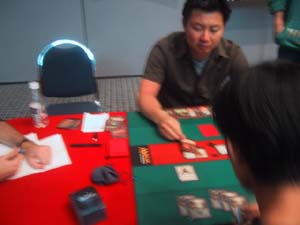 Law got out of the blocks with a flying start casting a turn 2 Wretched Anurid and then a turn 3 Gustcloak Harrier. Seck went straight onto the defensive, swatting the Harrier and then netting a Krosan Colossus off an Erratic Explosion aimed at the Anurid. Law continued to lay creatures though dropping down two morph creatures one turn after the other. When Seck attempted to block one with his freshly cast Symbiotic Elf Law let the damage stack then flipped over a Gravel Slinger and a Haunted Cadaver, stripping Seck's hand down to a single card. The lone card in Seck's hand came out at the end of the turn when he cycled a Tusker and then played two morph creatures.

Law was on fire though and played an infest clearing all of Seck's board, insects and all and left him with a Gravel Slinger and a Lancer. He then played another Lancer a turn later and all Seck could do was concede in response.

Seck elected to play first in game 2 and played a morph on turn 3 and a Goblin Sharpshooter on turn 4. Again Law was the player fastest to summon creatures with a Festering Goblin and a Severed Legion which traded with the morph creature. Law became stuck on 3 lands however and slapped down an Anurid to try and make a game of it.

Seck cycled a Tusker to help boost him to more lands, played a Festering Goblin of his own, and then passed the turn. Law managed to draw into a land and played a Gravel Slinger but all hell broke loose when Seck swatted it and pinged away the Severed Legion using the death stack. Law was forced to cast Aphetto Dredging so that he could get some kind of equality out of the current situation.

Seck cast a Murkdiver but Law had a combo of his own to wipe the board clear. Casting a Festering Goblin and then an Infest he got to put a –1/-1 counter on the Murkdiver and combined with the infest it meant the board was reset.

Seck had a fine comeback though playing a Symbiotic Elf and a Prowling Pangolin. Trapped on only 5 land Law was only able to summon one creature a turn and the 6/5 monster soon made short work of his life. Despite chump blocking for several turns Law was unable to find anything to deal with the Pangolin 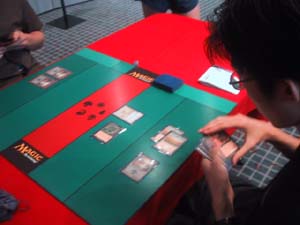 Law began game 3 with a turn 2 seeker but his turn three land drop of a Plains, giving him 2 plains and a swamp failed to yield any creatures, not even a morph. Seck was a little confused and played a morph of his own, trading it for the Glory Seeker. Law played a Dive bomber and passed the turn back to Seck who played down a Symbiotic Elf. Law finally played his second swamp but again he refused to play any spells, which tipped Seck off to an Infest. Seck squashed any chance of that spell clearing his board, playing out a Silklash Spider which Law was forced to Pacify. Seck was unphased and simply used the ability on the Spider to kill the Dive bomber, playing out an Elven Rider as well.

All these three toughness creatures were terrible for Law who did, in fact, have the Infest in his hand, but the lack of early double black had cost him as his hand was littered with spells like Severed Legion. Seck simply continued to attack with his Symbiotic Elf and his Elven Riders, forcing Law to Infest
During the attack phase to prevent a whole pile of damage. To add insult to injury Seck managed to draw his Naturalize so that he could remove the Pacifism and beat down with his Spider. Law tried in vein to stay in the match casting an Overflowing Cemetery but it was no use, and he soon died to the Onslaught of creatures on Seck's side of the board.