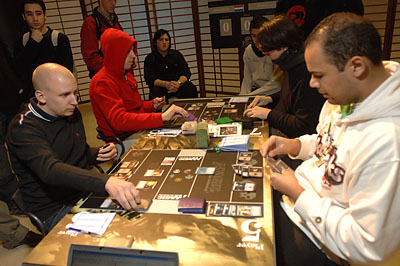 players enter this match at 7-3. Though the Hall of Famers haven't had the best results at events prior to this one, here in Paris I think we've got at least three in the running between Olle, Levy, and Gary Wise, all of which are right around that X-3 mark as I write this. Coming into this event Osyp was actually undefeated in feature matches where I'd covered him this season (3-0) but after his loss this morning while I was covering him, perhaps that wind has turned a bit?

Olle and his red/black deck were on the play for this one, leading off with a Thick-Skinned Goblin, while Osyp and his blue/black deck opened with Looter il-Kor. Olle missed a third-turn creature, but Osyp continued his curve, dropping out a mystery morph. Olle made up for his third turn miss with a fourth-turn Flamecore Elemental, a card that's been getting a lot of derision from the players - but that's when it's played fair. Thanks to the goblin the Flamecore was just a straight-up 5/4 for four, which is a great deal here in Limited.

Osyp's Looter came in again, depositing a second land in the bin, but Osyp just said go with four land in play, which seemed a bit suspicious. Olle breezed right on by his Flamecore's echo thanks to the Thick-Skinned Goblin, using the saved mana to point a much-needed Strangling Soot at Osyp's Looter. Osyp ahead said go, this time with five mana up, so when Olle played a Mana Skimmer, the American player looked to be falling dangerously far behind. However, Osyp wasn't done yet, flashing out a Teferi, Mage of Zhalfir. Unfortunately for him, Teferi fell to an Assassinate after thumping Olle once with his busted Planeswalker Stick, followed by the Skimmer locking down one of Osyp's two Swamps. Osyp used the mana first, flipping up a Slipstream Serpent, then adding Vampiric Sliver and Drifter il-Dal to his board, but Olle continued controlling his creatures with advantage, playing Subterranean Shambler to off the Drifter and using his final mana to give his Thick-Skinned Goblin pro-red to keep it around. 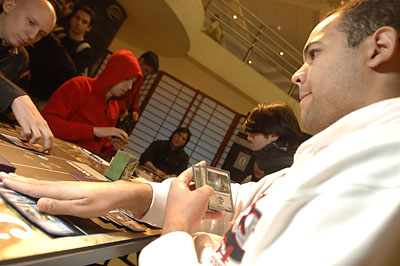 Yet again, however, Osyp wasn't out of tricks. This time it was Arena, which would allow him to start dropping Olle's creatures thanks to his Serpent's prowess in single combat (or something). The only thing Osyp needed was time, but at that point he was down to 4 life to Olle's 15, and when the Hall of Famer added another Flamecore Elemental to his side of the board, things looked dire indeed. Next upkeep, when Olle breezed past his upkeep again, Osyp told him he thought the Flamecore should go to the graveyard because Olle hadn't indicated that he was actually using the Thick-Skinned Goblin's ability. Olle gave him a fairly incredulous look, pointing out that it was a shortcut to keep the game going quickly and that Osyp hadn't objected the first time it happened earlier in the game on turn five. A nearby judge overheard the discussion and came over to weigh in. After listening to both players he let Osyp know that it was considered an acceptable shortcut and that the Flamecore Elemental could stay in play. Osyp thought a moment, then said "I'm pretty sure if I appeal that I'll get a different ruling." The judge politely asked if Osyp would indeed like to appeal the ruling and Osyp smiled. "Nah, I'm dead anyway. I'm not going to be a jerk. I'm going to lose anyway, I might as well lose with some dignity." Scooping up his cards with a chuckle, that was the end of Game 1.

This time both players had slow draws, with both of them getting their first creatures in the form of Vampiric Sliver by Osyp vs. Mana Skimmer for Olle. After that it was full price Gorgon Recluse vs. another full price Gorgon Recluse. Both players continued playing creatures and killing off opposing creatures, but a few turns later Osyp looked to have a trump in the form of Telekinetic Sliver, tapping down two of Olle's creatures a turn in combination with his Vampiric Sliver.

Olle got a hit in under the tappers, flashing out a Bogardan Rager once his Subterranean Shambler managed to get through unblocked. Osyp dropped to 12, but discarded a Dark Withering to his Urborg Syphon-Mage, killing the Rager and draining his opponent for two in the process. Falling way behind, Olle was forced to Empty the Warrens, which turned out to only have two goblins in it. Untapping, Osyp thought a bit and decided to tap both goblins and send the rest of his team, flipping his morph into Slipstream Serpent after attackers were declared, which earned the concession from the Swede.

This time Olle got to play first, but it was Osyp who had the first creature, with turn-two Looter. Olle had a morph for his third turn but Osyp looked much better, dropping a Gorgon Recluse into play off his Looter discard, netting a card and a ton of tempo in the process thanks to the Gorgon's power over early-game battlefields. It wasn't over, though, as Olle had a Shambler next, sending the Looter to the bin before it could do anymore damage, literally or figuratively. From here Osyp had a Crookclaw Transmuter followed by some mana fixing, but then he spent a lot of turns just playing lands and saying go. Meanwhile, Olle was now the one with an active Syphon-Mage. 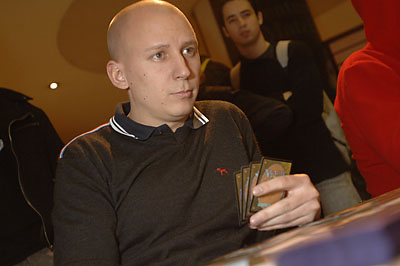 Olle has a shot at seeing Sunday.

The game continued slowly, with each player saying go with 6-8 mana open and nothing to do. The key turn came when Olle got to seven mana. For the first time in the game his morph charged into battle. Once blocked by the Gorgon it was flipped to reveal a devastating Liege of the Pit, offing the Gorgon without falling to the basilisk effect (since Liege is a black creature) and even trampling over to make it 16-16 on life. Osyp had nothing and had to pass the turn, so Olle used his Syphon-Mage in his upkeep, discarding Assassinate, which drained Osyp for 2 more, then sacced the Mage to his Liege of the Pit and sent it in with the Subterranean Shambler, following up with a Coal Stoker and a burn for 3 that wasn't any trouble at all for Olle. Drawing his last card, Osyp immediately conceded, his hand stuffed with land. Osyp had drawn hardly any spells at all for this deciding game, putting Olle one step closer to a chance at a Sunday return performance.