By by David Strutz 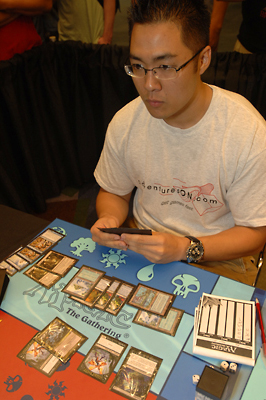 "I just drafted solid green decks," McDaniel said. He went 6-1, but it’s a whole new ballgame as we pick back up with the 60-card decks.

This matchup pits McDaniel’s mono-black deck featuring removal and Korlash, Heir to Blackblade against Cheon’s Faeries list. Both players piloted their decks to 2-1 records on Friday, and both players currently sit on 24 points at 8-2 overall.

We had no mulligans, and on the play Cheon led with Faerie Conclave and Sunken Ruins, while McDaniel dropped a couple Swamps. Shadowmage Infiltrator came down for the former national champion on turn three after he played Mutavault, and McDaniel used his turn to play Beseech the Queen, finding a fourth Swamp.

Shadowmage Finkeltrator got in there, and Cheon passed after adding an island to his board to make the magical four lands. McDaniel tried to use Tendrils of Corruption on Finkel, but Rune Snag was waiting. The card advantage machine got in again, sending the mono-black mage to 18. A Korlash, Heir to Blackblade from McDaniel was stopped by Snag number two, and Cheon continued dropping lands. He added a Bitterblossom on turn six with enough mana to Mistblind Clique, but the 4/4 met a Terror from McDaniel.

McDaniel added a Trip Noose, but he was tapped out for Cheon’s attack with Mutavault and Shadowmage Infiltrator. Another Mistbind from Cheon was hit by another Terror, but the Faerie tokens were going to start accumulating for the former national champ. He played a second Mutavault while McDaniel continued to struggle on his next turn, and Cheon threatened an attack. McDaniel used his Noose to keep Finkel away, but he had no blockers for the Vaults and went to 7 against Cheon’s 18.

McDaniel decided to try Damnation to reset things, but Cheon considered, counted lands, and found he had enough for Cryptic Command. The next turn’s attack was more than McDaniel could deal with, and he sent the match to the sideboard phase.

The players thumbed through their sideboards in relative silence before shuffling them up. Cheon’s deck changed radically as he took out his Shadowmage Infiltrators, Terrors, and Slaughter Pacts for spells that would do more against a mono-black deck. McDaniel made some changes as well, but would they be enough to take the next two?

McDaniel took the play and kept, but Cheon made the first play with a suspended Ancestral Vision. McDaniel added Mind Stone on his second turn, and the ominous turn-two Bitterblossom came down for Cheon. McDaniel had no turn-three play, but Cheon sure did: another Bitterblossom. At the end of the turn, McDaniel’s Unmake took care of Cheon’s first 1/1 flyer. 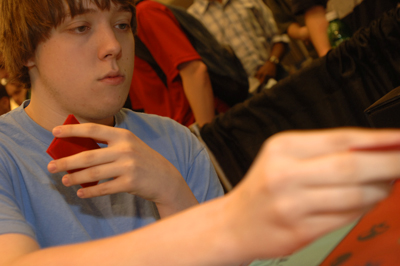 Chris McDaniel’s Standard record has been spotty, but his draft skills have kept him at the top tables.Turn four saw a Beseech the Queen from McDaniel, and Korlash came into his hand. Could he stick the large black grandeur creature and race the tokens?
Going to 17, Cheon put a pair of 1/1s into play, then laid his fourth land and passed. McDaniel tried to cast his Korlash, but Cheon had Cryptic Command and McDaniel’s board remained just lands.

Tokens were made, tokens swung, and life totals dropped on both sides. Though the tally was in McDaniel’s favor, he’d need to stick a threat soon. After drawing his three cards, Cheon played a Faerie Conclave and used Thoughtseize to strip a Tendrils of Corruption away from McDaniel, greatly wounding the mono-black mage’s ability to keep his head above water. Remove Soul countered a second Korlash, and the Faerie tokens kept up their beats. Cheon added a Mistbind Clique, which McDaniel killed with a second Tendrils of Corruption, allowing him to stave off death.

Cheon’s life total wasn’t too high either, but he had a hoard of Bitterblossom tokens against an empty board. When he added another Mistbind Clique and McDaniel’s Mind Stone revealed no answers, the game and match came to a conclusion.