Round 11: Bottom Set vs. Original Slackers

Last year, Maher and Reeves made Top 4 with Gary Wise. This year, they're one match away from repeating, this time with good friend Dave Williams. On the other side of the spectrum, Original Slackers is a team from Norway without any major Pro Tour accomplishments, although they have been around competitive Magic for a while and Osterberg has three GP Top 8s with one win. A win here would put all three players on the map. 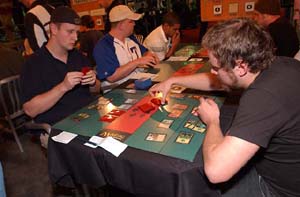 Maher's creatures were held back by Crnobori's Beast team, which included Needleshot Gourna. Timberwatch Elf was out and active as well, making life difficult as always. Maher did have the Wall of Deceit - Aphetto Runecaster combo going, but needed to find an answer to the Timberwatch. Eventually he had to start chump blocking, until he unmorphed Titanic Bulvox on end step, untapped, and summoned Spitting Gourna, and put Alpha Status on his Bulvox to make it a deadly trampling machine. Crnobori was able to absorb the attack and take down the Bulvox, then summoned Dragon Mage to push through the rest.

Reeves won the first game easily by putting on quick pressure and gaining tempo advantage. This involved playing a 4/4 Embalmed Brawler and flipping over a Zombie Cutthroat in response to Smother. Game 2 was more of the same, as Reeves got out a solid Zombie team of Skinthinner, Embalmed Brawler and Nantuko Husk. Smith played a much bigger threat in Anurid Murkdiver, and had Carrion Feeder as well. Still, Reeves had strength in numbers, and sent all of his creatures into the Red Zone to try to force through enough damage before Smith could stabilize. A hard-cast Zombie Cutthroat provided some much-needed defense, and Smith blocked Reeves's attacks, which were able to force through a few more points of damage. Rush of Knowledge let Smith draw six cards, and it seemed he had the edge. However, Reeves attacked with his team, brought Smith down to one, and finished him off with Spark Spray.

In the other match, Osterberg's Lightning Rift would have been trouble, if not for Williams's Daru Sanctifier. Still, Osterberg gained the advantage in the air with Swooping Talon and an Aven Farseer that became 3/3. Dragon Scales enchanted the Talon and made it a removal machine, taking down Williams's creatures one at a time until he conceded. 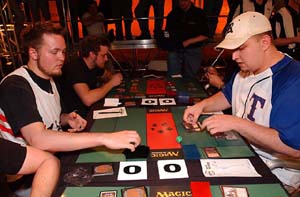 In game 2, Williams could only muster a 2/2 Daru Stinger, but he had a Warchief to make it a little more threatening. Not helping matters was the fact that Osterberg drew his Lightning Rift, although while the Warchief was out, Williams's creatures would at least be a little harder to kill. It wouldn't take much to handle the problem, as Osterberg put his Catapult Squad in front of the Stinger and used Pinpoint Avalanche to destroy the Daru Warchief. He improved his position a little more with Gempalm Avenger, but Williams handled the threat with Pacifism. Osterberg couldn't get the threats he needed, although he did draw plenty of land to power his Flamewave Invoker. Over the course of the next turns, Williams played a second Whipgrass Entangler along with Ascending Aven and Zombie Cutthroat, while Osterberg got to eight lands. Williams went for an all out attack to bring Osterberg to 1 life point, but there was an out left. Osterberg played Decree of Annihilation to reset the game, leaving him with a Lightning Rift. Both players rebuilt, with Williams playing a morph, and Osterberg having the right answer in Glory Seeker to stay alive. Williams had a Pacifism, however, played it, and forced through the last points of damage to win the game.

A pair of Scattershots helped Crnobori deal with some of Maher's creatures, leaving Bob with only a Needleshot Gourna to a Goblin Sledder and morph creature. Still, Maher was able to force through significant damage before that point, bringing Crnobori down to seven life points. Crnobori had only a Wirewood Elf and a morph, which was taken care of thanks to Frozen Solid. The Gourna attacked twice more to bring Crnobori down to one, and on the next attack Crnobori blocked with two Wirewood Elves and a morph, then used Carbonize to take the 3/6 down. He started to stabilize with a Needleshot of his own, but Maher had Threaten to take it and get through the last points of damage. 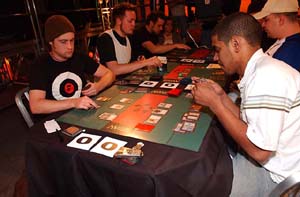 Crnobori mulliganed down to five, and Maher went to six. Maher summoned a morph, and Crnobori missed his fourth land drop, but kept pace thanks to Wirewood Elf. Battering Craghorn, Skirk Outrider and Needleshot Gourna kept the pressure on, while Maher's draw offered little resistance. Accelerated Mutation finished him off, leaving the Top 4 berth to be decided between Williams and Osterberg.

Williams started off with Whipgrass Entangler, and Osterberg had Deftblade Elite and Catapult Squad. Akroma's Devoted made Williams' defense look better, but Osterberg put Dragon Scales on his Elite to not only give him a 2/3 provoke creature, but the ability to activate the Catapult Squad on an attack as well. With the help of Piety Charm the Devoted was taken out, and Williams seemed to be in trouble. Lightning Rift followed, and Whipgrass Entangler was the next to die. Warped Researched slowed things down, however, and Williams played a 3/3 Stinger. Just when it seemed that Williams was back in the game, Osterberg brought out Dawn Elemental. Williams summoned a Dragonstalker, giving him a flying threat to crack back with. He kept playing threats, which left Osterberg lacking options and with time running out. He had to go for the win soon and cast Decree of Annihilation. He was prepared and came out strong with Aven Farseer and Flamewave Invoker, but Williams was ready to put up a fight with Starlight Invoker and Zealous Inquisitor. With Williams tapped out, Osterberg cycled Eternal Dragon to Rift away the Inquisitor, and then summoned Aven Soulgazer to make his flying clock 4 damage a turn. With the help of Lightning Rift, this was enough to defeat Williams and send Original Slackers to the Top 4.