Round 11: Bram Snepvangers vs. Christophe Haim 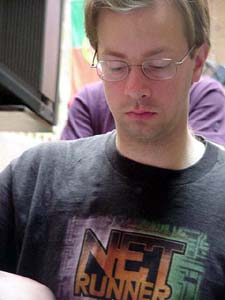 Both players had a Top 8 finish in one of the last two Pro Tours held. While Christophe was eight at Pro Tour-Osaka, Bram fell in the second slot at Pro Tour-Nice.

Bram played a Millstone deck with black for Vindicate and Dromar on the sideboard, while Christophe played a red-blue-green deck taking advantage of the madness-mechanic.

Christophe won the die roll and chose to start. Besides good luck wishes from Christophe few words were exchanged as both players realised how important the outcome of this match could be. Both players were at 7-3 and to reach Top 8 they would have to win all further matches.

Christophe took a mulligan. With big eyes he watched his new hand but decided to keep it. It then was Bram's turn to mulligan to six. As he drew a landless hand he took another mulligan. Bram decided to keep a hand with two Underground Rivers only to fail to draw any land during his next three turns. Despite this Christophe saw no way of taking advantage of the situation. While he had five lands in play he had not cast a single spell yet. Bram's low landcount forced him to discard a Wrath of God, which seemed of little use so far with no creatures on the other side.

Fire/ice was the first spell cast by Christophe during Bram's upkeep of turn six, tapping an Underground River. The first creature played was an Aquamoeba, which the unfortunate Dutch could not prevent from coming into play. All the while Bram was stuck at three lands and was forced to discard again.

Aquamoeba attacked for three while Christophe discarded Roar of the Wurm. Bram however still got punished for countering the flashbacked Wurm since the only blue mana sources he had were his two Underground Rivers. Bram arrived at 15 life and again passed a turn, unable to drop a card in play. Christophe repeated the process of discarding a Roar of the Wurm to pump his attacker. Bram's bad luck almost got compensated as he could Counterspell this one as well, again at the cost of two life. One Roar of the Wurm later Bram had no other option than to give up and try to take back the next game, since his deck gave the impression there were no other lands left in it.

Bram chose to start. As both players realised how important this match was there was a meaningful silence all along. Bram was forced to take his third mulligan this match, and then another one, totalling four mulligans. Luck seemed to stay away from his side, and mulligans would do him little good as he needed the card advantage against Christophes' aggressive deck.

With two lands in a five card hand he started by casting a Salt Marsh, later on followed by a plains and an Underground River. Christophe started of well with a second turn Merfolk Looter. An Aquamoeba got Absorbed on the next turn.

This time Bram did not miss out on a land drop and chose to play a Fact or Fiction on his own turn risking Force Spike, but gambling well. It appeared to be a 'broken' Fact, revealing three Vindicates, a Ghastly Demise and a Counterspell. This caused Bram to release a lucky shout. 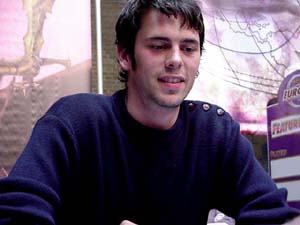 Christophe had an impossible job and was forced to hand him two Vindicates and the Counterspell. He dropped a Shivan Oasis and passed the turn, tapping a plains in Bram's upkeep with Fire/Ice.

The next few spells Bram played always got an answer from Christophe. Fact or Fiction was responded to with Gainsay and a Vindicate, aiming for the Looter got countered by a Circular Logic. Bram found an answer to the Logic but a second Gainsay took care of that. The only result was the Looter stayed alive, which cost Christophe three damage caused by his own painlands.

Christophe Looted for better cards on his own turn, but seemed unhappy as he just cast Aquamoeba. The following Fire/Ice during Brams' upkeep was answered with a Dromar's Charm on the Looter.

The remaining Aquamoeba found no resistance however and kept attacking for one, but Christophe got nothing in play for several turns as a new Merfolk Looter got Absorbed by Bram. Failing further good draws Bram was forced to play the waiting game while Aquamoeba kept attacking for a mere one damage per turn.

As Bram sunk back to 20 life, Christophe stood lower at 17, having taken damage from his own painlands. Deep Analysis on Christophe's part was allowed, and with the flashback cost he got four cards ahead. Christophe looked happier now, as again Aquamoeba started biting the life out of Bram by three per turn.

When Christophe cast Obliterate Bram could do nothing. Two turns later Christophe dropped a Merfolk Looter on the table. The strain was now on Bram's shoulders who looked like losing out on the recovery game. An Arrogant Wurm got Memory lapsed, but Bram faced another land shortage and two consecutive Wurms got in the game without response from Bram. A few turns later it was game over for him.