Round 11: Brock Parker vs. Jeff Garza 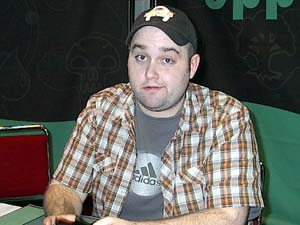 Jeff Garza is the sixteen year-old 2004 JSS Champion who sat down and immediately lodged a complaint that we didn't cover him when he was eliminating National Champion Craig Krempels from competition in round 7. Brock Parker is the baby-faced Pro Tour: Boston Champion who, like fellow Magicians Dave Williams and Thomas Keller, sat at the final table during a World Series of Poker event this year.

Parker was forced to mulligan down to five cards to start game 1 as Garza said, "You're just doing that so you can embarrass me later when you beat me." Those thoughts looked eerily prophetic for a few turns as Brock got out to a fast start with an early Ornithopter, Somber Hoverguard and Paradise Mantle, but he didn't have much gas left when Garza Molten Rained away a Seat of the Synod. Arc-Slogger resolved and cleared a path to victory, but got Shrapnel Blasted before it could get a swing in. Night's Whispers and Jens dropped Brock's life into dangerous territory, and a Pulse of the Forge off the top plus a second one in hand finished him off.

Game 2 went by in a flash, as Brock started off with a Worker, Ravager, Frogmite draw, and blew right past an Echoing Ruin and a Flamebreak with another Ravager and enough land to keep his men alive, notching another turn 4 kill in Affinity's belt.

"This is my first match where I've gone to game 3 in the whole tournament," pronounced Garza.

In Game 3, Garza cast a turn 3 Damping Matrix, shutting down some of the important parts of Brock's deck, including Paradise Mantle. This prevented Brock from any Ravager tricks, and also wrecked his ability to cast any sideboarded Qumuloxes. Brock nearly stabilized, but Garza killed Brock's lone red source with Shatter, and mana burned himself down to one life. He then untapped and burned Brock out from ten with Pulse of the Forge and a Magma Jet. 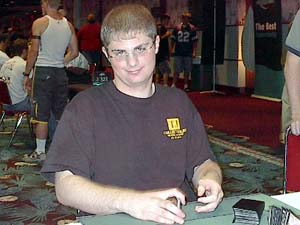 Garza: "I didn't side in the Matrix on the draw because it's not that good there, especially if he gets a fast start. I generally cast the Matrix against Affinity to stop Ravagers and to shut down their Atogs, which just beat the hell out of me. It's probably not as good against Brock's version, but it definitely had an affect on our last game."

Brock: "I mulliganned to five in game 1, mulliganned once in game 3, and still would have probably won the last game if I had drawn a Blue source. The deck kind of let me down this round, but it's been good otherwise."