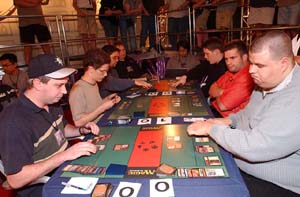 Kai Budde is broken beyond all repair. Last weekend he won his fourth Grand Prix and this weekend he wants his fourth Pro Tour. He dragged two buddies out of retirement (1999 German national champion Marco Blume and 1998 Pro Tour Chicago champion Dirk Baberowski) and now they're 10-1, sitting in a first place tie with just one other team. Keep in mind that Budde has never lost a Pro Tour match on Sunday - he's 9-0 lifetime.

While Budde's Phoenix Foundation (a reference to the old TV show MacGyver, which is currently showing in Germany) needs at most 1 more point to make the finals, their opponents in round ten needed at least a win and possibly a win plus a draw. In a classic battle of obscure TV references, they took on the Car Acrobatic Team (an allusion to Speed Racer). So who wins in a fight, anyway? Speed Racer or MacGyver?

C.A.T. kicked off and stuck to their basic plan: green in the middle, red-black in the red-black seat and blue-black on the left. Andrew Johnson wound up with an early Stormscape Apprentice and never had a compelling reason to splash any color other than white. Forsythe had Stormscape Battlemage forced into is pile by a Planeshift pack and wound up black-red-blue. He wasn't complaining when Crosis's Charm came along a few packs later. Cuneo once again accumulated mana fixers, all the Battlemages he could get his hands on, and has a fairly typical 5-color green deck. 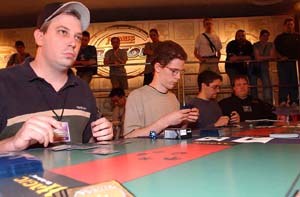 Phoenix Foundation, like the team C.A.T. beat last round, prefers green on the left and blue in the middle. Kai has the green deck. Baberowski has blue-black-white in the middle, and their A-seat plan was a little more interesting than most. Marco Blume was directed (by Budde) to draft a red-white deck and they waited as long as possible to figure out his splash color. They seemed to want him to be blue-white-red, but he wound up with a bunch of black cards so red-white-black it was. The payoff came in Apocalypse where he picked up two Dega Disciples and two Angelfire Crusaders, all with reasonably late picks.

Baberowski had an amusing draw - he had to return Cavern Harpy to his hand in order to get Silver Drake into play. However, Cuneo didn't have any Plains and quickly succumbed to that air force, once it all finally got into play.

Budde had a nice mana curve in his first game: Thornscape Apprentice, Quirion Explorer, Living Airship, "Stone Cold" Kavu. Johnson tried to stabilize with a Coastal Drake, returning Budde's kavu to his hand. Budde didn't bother to replay his Stone Kavu because Sabertooth Nishoba seemed better. Johnson couldn't stabilize and the Germans were up in a second match. 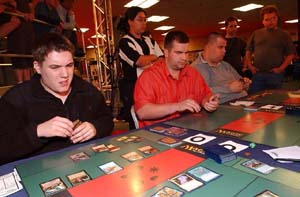 The Germans knew they only needed one more point to clinch the final four, and they reminded their opponents at this point that the offer of an intentional draw was still on the table. The Americans probably needed a win and a draw to get in, so a draw was definitely better for them than a loss, but there were scenarios where they could sneak into the finals on tiebreakers with a 1-1 finish so things were quite complicated for them.

When Forsythe also lost his first game, the guys from Pittsburgh looked at each other, nodded, and realized their odds of coming back by winning six straight games were so small that they should indeed agree to the draw.