Round 11: Champions of Evasion 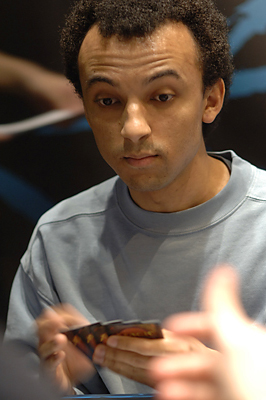 Guillaume Wafo-Tapa has a fine track record.While both players are PT winners, Jon Finkel's achievements seem to tower over Guillaume Wafo-Tapa—and the Frenchman has a fine track record. Wafo-Tapa has the PT–Yokohama trophy along with four GP Top 8s in his incrementally growing resume. Ironically, its easier to list Jon's achievements. He has won essentially every imaginable title there is.

Both players were armed with blue decks. Wafo-Tapa had an array of Faerie friends to rule the skies since Finkel had close to no fliers. However, Finkel had Shriekmaw, and we all know how much it wrecks your opponent. Islandwalkers like Deeptread Merrow would be gold in this matchup and interestingly enough, both players also had double Stonybrook Banneret.

It seems that the "ten or other" method of determining who goes first is becoming increasingly popular. Jon won the coin flip with a Malaysian ten-cent coin and started of with Sage of Fables and a 2/5 Turtleshell Changeling. Wafo-Tapa had Drowner of Secrets to defend against the Sage of Fables but did nothing to stop the changeling from doling out the damage.

An end-turn Faerie Harbinger from Wafo-Tapa tutored for Nameless Inversion and promptly dispatched the Sage of Fables before Finkel could generate any card advantage. He attacked with his Faerie to reduce Finkel to 18, and Latchkey Faerie prowled in to join his comrade.

A Shelldock Isle from Finkel put a card away that would prove pivotal in this match (not spilling the beans now...). He then added a Paperfin Rascal (now 4/4 with a Merrow Reejerey) to his army and Wafo-Tapa wasted no time in milling the "Stonybrook Angler" that was revealed from the clash.

Turtleshell Changeling continued to claw away, and Wafo-Tapa fell to 9. Wafo-Tapa pondered for a minute and passed, only to flash Sentinels of Glen Elendra when Finkel attacked. A block and a Stream of Unconsciousness later, the Changeling's switching shenanigans caused its own demise. Wafo-Tapa chumped Paperfin Rascal with Latchkey Faerie. All this while, Drowner of Secrets was slowly chipping away at Finkel's deck, and Wafo-Tapa added Streambed Aquitects to double its speed.

Jon summoned Cloudgoat Ranger, and Wafo-Tapa answered with Deeptread Merrow and Benthicore. There were now five Merfolk working away at Finkel's library, and time was running out. Jon answered with Shriekmaw, killing Sentinels of Glen Elendra, and swung and connected with a 5/3 Cloudgoat Ranger. The Shelldock Isle was active now, but Finkel didn't (yet) activate it.

Wafo-Tapa, now at a precarious 7 life, reloaded his hand with Distant Melody, choosing Merfolk. Jon attacked with an array of evasion creatures (Shriekmaw with fear, Stonybrook Bannerret with islandwalk, and Cloudgoat Ranger with flying), none of which Wafo-Tapa could block.

Jonny Magic was down to three cards in his library, so all Wafo-Tapa had to do was survive to deck him out next turn. He tried to ambush the Cloudgoat Ranger with a sneaky Dewdrop Spy, but all Finkel had to do was flash out the card that was tucked beneath the Shelldock Isle.

Finally, after 30 minutes, Æthersnipe for the win.

Wafo-Tapa sided in red for Tarfire and Rivals' Duel, and Finkel brought in Deeptread Merrow for more evasion sickness.

You could go to the loo and return to find this game over. Wafo-Tapa chooses to draw and opened with Ponder. He proceeded to summon Stonybrook Banneret, Streambed Aquitects, and Inkfathom Diver on turns two to four. All Finkel could do was lay Swamps and Plains and stare at his fistful of blue cards. He conceded on turn six after failing to draw an Island. 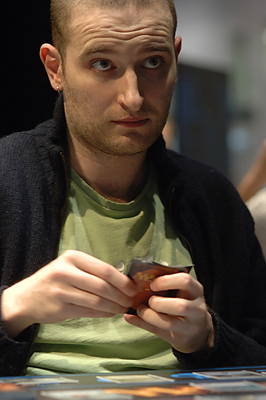 Jon Finkel knows what Turtleshell Changeling's toughness is after an activation, a Wings of Velis Vel, and two Stream of Unconsciousness.Finkel led with Deeptread Merrow, Merrow Reejerey, and Turtleshell Changeling on turns two to four, one of the best openings you can get in this matchup.

On his fifth turn, Wafo-Tapa finally proceeded to play his first spell, a Nameless Inversion on the Merfolk lord. Finkel attacked and switched Turtleshell Changeling's stats. With the ability on the stack, Wafo-Tapa attempted to slay it by giving it -4/-0 with Stream of Unconsciousness (which would apply before the P/T switching, leaving it as a 4/0—strange but true). After the Stream resolved, but before the changeling's ability did, Finkel attempted to save the Turtle with a Wings of Velis Vel, but the Frenchman showed him yet another copy of Stream of Unconsciousness. Finkel continues to attack relentlessly with the islandwalking Deeptread Merrow.

Wafo-Tapa finally managed to Weed Strangle the pesky Merfolk, but a ravenous Shriekmaw from Finkel sealed the rubber match for him.