Round 11: Christian Luhrs vs. Matt Linde 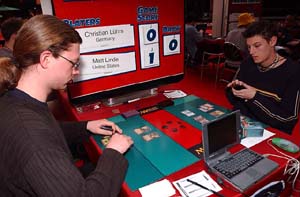 Christian Luhrs is another good German player who has played in the Pro Tour for long enough to be a recognizable name. Just like the Netherlands, Germany seems to spawn new Magic playing machines every week.

Matt Linde once beat Mike Long in the finals of U.S. Nationals. That would be enough to make him pretty popular in the Pro Tour circuit back then. He also got a Worlds Top 8 a few years ago.

Game 1:
Linde came out like a bat out of hell: Patrol Hound, Hydromorph Guardian, Nantuko Disciple while Luhrs could only muster Diligent Farmhand.

The little guy jumped in front of the Disciple and Christian Muscle Bursted it. Matt used Shelter to save his creature and dropped his opponent to ten.

The German played his own Guardian and chumped with the Farmhand going down to six. The American untapped and dropped Aven Cloudchaser.

Again the American came out fast with Devoted Caretaker and Phantatog while Luhrs played Basking Rootwalla. The green creature locked the table up so they settle into "draw go" for a few turns. 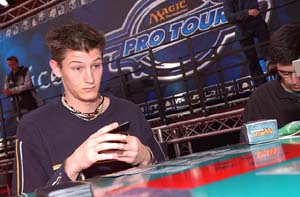 At five mana Linde used Scrivener to get his Search back. Luhrs played Nantuko Disciple and the Rootwalla traded swings with Phantatog and Scrivener.

While Linde sat behind Second Thoughts Luhrs played Hydromorph Gull to take the battle into the skies. When he sent it in, along with Rootwalla, Linde tried to get rid of the Rootwalla.

Aether Burst bounced it out of the table and Luhrs replayed it. Again Phantatog attacked, and with seven cards in Linde's hand, the German let it through.

The German added Seton's Desire to the Gull and Linde used Shelter to turn his new Angelic Wall into the perfect blocker for a turn. He passed back the turn with Liquify and Pay No Heed in hand.

Luhrs felt the coast was clear enough to drop a bomb: Overrun. He sent his now enormous army into the Red Zone and Matt Linde's spidery hands danced around trying to find a way to block.

Liquify caught a Muscle Burst and Pay No Heed turned the monster swing into six damage for Linde and three dead creatures. Linde was down at ten, had only one card in hand and had some problems to solve.

Sitting on top of his deck was Aven Cloudchaser. That killed Seton's Desire. Luhrs pressed on with everyone killing the Phantatog and a turn later finally broke through Linde's last-ditch resistance to deal the final points of damage.

A Peek on the first turn showed Matt he had little to fear from Lurhs early on. The German returned the favour and saw that Linde had a very good hand including Hallowed Healer and Second Thoughts. 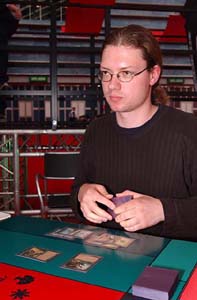 Christian: "You had a good draw."

By the time he got Seton's Desire on his Phantom Whelp Patrol Hound had already nibbled him twice and Arrogant Wurm was on the table. Shelter saved the Wurm from the big Whelp and Luhrs went spiralling downwards.

He played a Nantuko Disciple but couldn't stop the flood of damage Matt Linde was pushing into the Red Zone (helped by his Healer waiting to screw the math).

At two Luhrs played a second blocker and got ready for the fight. Linde finally slowed down from his amazing pace and stared at the board for a few minutes before sending Hound and Wurm in.

The Disciple took on the Hound and the Scavenger blocked the Wurm. Luhrs went down to one, he drew another card and knew he was in trouble. The Anurid Scavenger held the Wurm one last time but eventually Christian Luhrs revealed his hand full of lands.

That wouldn't be enough to stop Matt Linde's little set up.