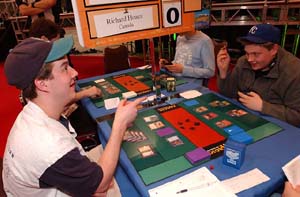 Craig Krempels is a late bloomer among the TOGIT gang. When Gerard Fabiano, Osyp Lebedowicz, Eugene Harvey, and company all started winning Craig was still the last kid left standing against the gate when sides were chosen for drafts. Over the last year all of that has changed; not only is Craig in an excellent spot to make the first PT Top 8 of his career but he is pulling out into the lead in the Rookie of the Year race with his strong performance this weekend—he sat at 9-2 coming into this round. His deck is a U/W powerhouse with two Cloudreach Calvary and countless Gustcloak Harriers and Ascending Avens. He also has a Mobilization that he is not sure he should have taken over what would have been his fourth Harrier.

Richard Hoaen is not as impressed with his own deck. After going 7-0 and yesterday—the only player to do so—with Cleric decks, he found himself at 1-2 today with an unspectacular G/R deck with few spells and less removal.

Craig came on strong with Glory Seeker after Rich's Goblin Taskmaster. Rich came back with Gempalm Strider and they both played morphs on their third turns. There was little blocking going on and they began the race. Craig was looking for a second Plains to play his Harrier and Celestial Gatekeeper but he contented himself with Ascending Aven and Ixidor.

Craig never found the second plains but was able to kill several creatures with his Echo Tracer while Rich cycled Tuskers looking for a way to deal with the flier. Craig played a Cloudreach and was able to seal the deal without ever playing the double white spells. 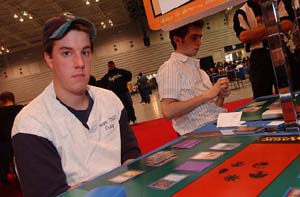 Rich mulliganed his opening hand while Craig flashed me a grip of Cloudreach, two Harriers, AND the mana to cast them. Hoaen needed to mulligan to six good cards.

Rich played morphs on the his third and fourth turns while Craig's board developed in a predictable fashion. Rich managed to make a race of it when he flipped over a Branchsnap Lorian and then played a Charging Slateback. Craig decided to give up a Harrier to kill the Lorian and a Mistform Shrieker and a Gempalm Avenger in his hand gave him multiple ways to win.

"The one time I don't draft clerics and my deck is awful!" complained Rich. He showed me an Aven Redeemer and a Whipgrass Entangler, "I cut this card 12th and this one 13th!"

He no longer had to play with his "awful" deck and would have one last chance to draft his favorite archetype. Despite going 1-3 so far today he still has a shot at playing on Sunday with a 2-0-1 showing to end today.