Round 11: Dan Clegg vs. Eugene Harvey 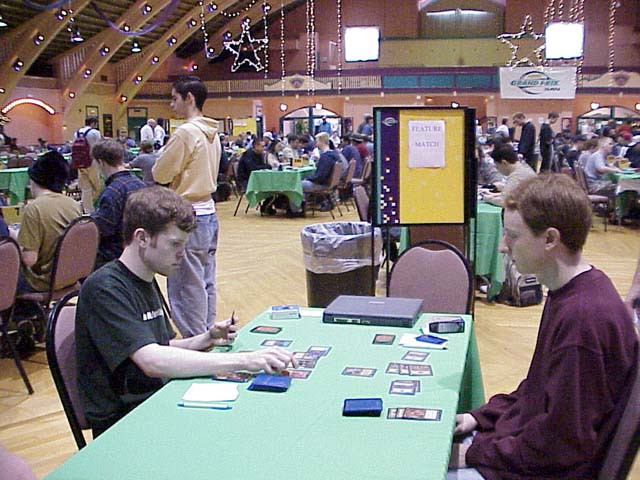 Eugene Harvey vs. Dan CleggBoth Eugene Harvey and Dan Clegg faced the same mission when they sat down to play each other in a round 11 feature match: win the table to advance to the Top 8 and try to win a second Grand Prix. Each needs three straight wins to keep playing. Only one of them would still be alive after this match. Team CMU and Team USA member Eugene Harvey drafted a green-blue deck while Invitational runner-up Dan Clegg went black-blue.

Clegg used Mesmeric Fiend to deprive Harvey of Compulsion on turn 2 and then used last Rites to leave Harvey with just Crashing Centaur, four total land, and a pair of creature enchantments (Ghostly Wings and Seton's Desire). With Afflict and Faceless Butcher in his hand, it looked like Clegg had the game all wrapped up. However, Clegg stopped attacking when Harvey played an Acorn Harvest and enchanted one of the squirrels with Ghostly Wings. Those squirrels held off a Soul Scourge and a Faceless Butcher and gave Harvey time to draw a Krosan Avenger and then an Aven Windreader. 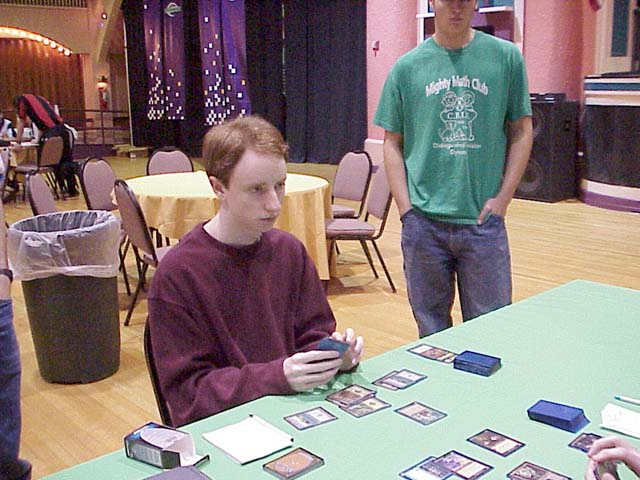 Eugene Harvey Harvey started sending in Krosan Avenger as soon as he got to threshold. Clegg had nothing that could block it effectively. Clegg had several more creatures than Harvey, but he was very reluctant to attack because he didn't want to give Harvey the opportunity to kill any of his nightmare creatures. Thanks to the Windreader, both players got to see that Clegg was drawing nothing but land. The Avenger beat Clegg all the way down to 2 and then a Krosan Constrictor finished him off. If seemed like Clegg needed to press his attack early, perhaps trading the Soul Scourge for Ghostly Wing and a squirrel so Faceless Butcher et al could start going in. You could tell by Harvey's shaking hands that he felt he got away with one there, winning when he wasn't supposed to.

Harvey looked like he would be able to attack in the air in Game 2 with his Aven Fisher and Aven Windreader. However, Clegg played out a Sengir Vampire and that was the end of that. Harvey moved to plan B: Rabid Elephant and Crashing Centaur. Clegg had Patchwork Gnomes and on defense while Frightcrawler and, as soon as he got to threshold, Dirty Wererat played offense. When Sadistic Hypnotist knocked Amugaba out of Harvey's hand (for the second game in a row),that pretty much clinched the damage race in Clegg's favor. Frightcrawler races pretty well against blue-green. 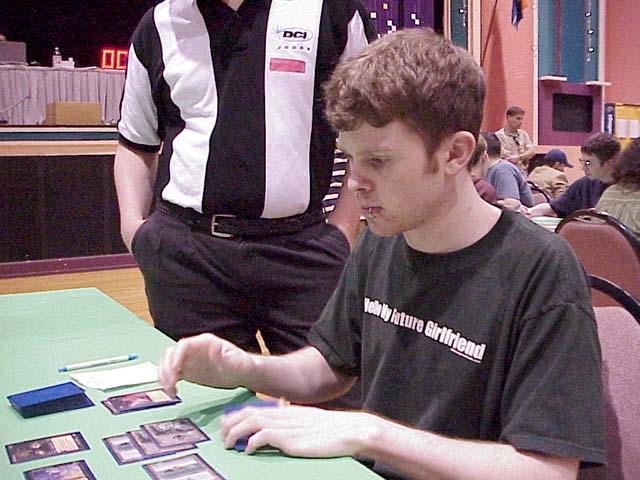 Dan CleggClegg built himself a shotgun in game 3. He put one Psionic Gift onto Millikin and another onto Mesmeric Fiend (which was also holding onto Rabid Elephant). Repentant Vampire came own to deliver some damage in the more conventional route and Harvey had to try to race with a lone Crashing Centaur. With Clegg just needed an untap and an attack to finish him off, Harvey played Upheaval!

When the dust settled, Harvey had to discard three lands while Clegg lost a total of nine cards – five of which were land. However Clegg kept Millikin so he could power out a fast 4/5 Wererat followed by a quick Sengir Vampire. Harvey still didn't have any answers.