Round 11: Dario Parazzoli vs. Wolfgang Eder 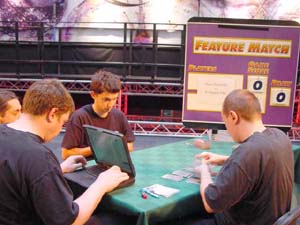 So we returned to Standard for the last four rounds to determine who would play in Sundays Top Eight. Daniel Parazzoli from Italy and Wolfgang Eder from Germany are sitting at third and seventh in the rankings respectively, both on twenty four points. Parazzoli finished 2-1 with his G/R standard deck yesterday but Wolfgang Eder is using a techy R/B goblin deck that includes Patriarch's Bidding which placed him second in the standings on 3-0.

Parazzoli kept his opening hand and his G/R deck lead off with a Llanowar Elf which died attacking into a Goblin Sledder and was replaced by a Grim Lavamancer. Having blocked the elf Eder played a Sparksmith that couldn't be allowed to live and was immediately killed on turn three by the Italian's now active Lavamancer. A turn three Goblin Warchief from the German kept the life totals falling and a Parazzoli Phantom Centaur produced the game's first large creature. Eder's Goblin Grappler provoked the Lavamancer to death then the Italian attacked with the Centaur and cast Call of the Herd and another Lavamancer. 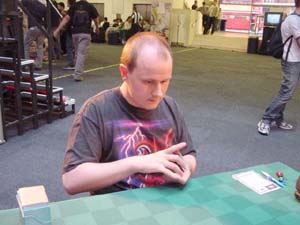 Sacland action from Eder along with the Warchief allowed a Siege Gang Commander. Suddenly there are lots of goblins! Parazzoli used the Lavamancer to kill the Commander but a devastating Patriarchs Bidding from Eder returned three goblins including, most importantly, the Siege Gang Commander. The German declared everything as an attacker except for three goblin tokens and attacked, getting eight damage through. The Italian cast another creature but a second all out attack from Eder deals fatal damage. Parazzoli dies with three Violent Eruptions in hand.

Both players sideboarded several cards before shuffling up for Game 2. Parazzoli chose to play first and both players kept their opening hands. Parazzoli produced a Call of the Herd token on turn two after a Llanowar Elf, both creatures attack on turn three unblocked and are joined by a Wild Mongrel. A third goblin allows Eder to Sparksmith the elephant token and a cycled Gempalm Incinerator against the Wild Mongrel is prevented by the discard of a card but it died when it was provoked to block the Goblin grappler. Parazzoli now has nothing except a Llanowar Elf and desperately needs to draw something to deal with Eder's growing hoard of Goblins. 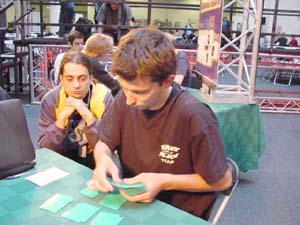 The Italian's only saving grace was that Eder had only dealt one damage to him so far whereas the German was on twelve. Parazzoli attacked with his lone Llanowar Elf, which was allowed through unblocked and then he played a land and flashed back his Call of the Herd. A fourth goblin and a Sparksmith activation killed elephant token number two and reduced Eder to eight life but he attacked Parazzoli down to sixteen. Hammer killed Eder's Goblin Piledriver. A sacland from the German allowed a Siege Gang Commander and not the Patriarch's Bidding Parazzoli said he feared. An Elephant Guide on the Llanowar Elf killed a goblin token that had the effrontery to block it when it attacked but Eder attacked for six damage to take the Italian to eight life and when the German played a Goblin Grappler, Parazzoli couldn't draw anything to help and a concession was quickly offered and accepted.