Round 11: Darwin Kastle vs. Chris Benafel 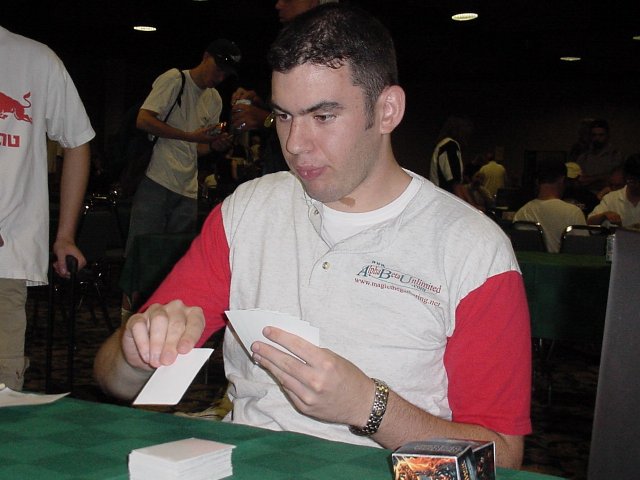 These two men have met several times, and although Darwin won the first match-up at the Draft Challenge last year, Benafel has taken every match since. Darwin is hoping to break Benafel's streak against him, and make top 8, but Benafel is certainly in contention as well. A little banter goes back and forth before the match, deciding who is actually the slower player, and the consensus seems to be Benafel. Darwin is packing 3 sporty draws from his control deck getting timed out, while Benafel has a pair of losses.

Benafel is with the Solution, a mix of quick blue and white creatures to land early tempo and defend them with counter magic. Kastle is playing a slow, but effective URB Control deck with a lot of answers to early creature drops. He also has access to more counter magic and card advantage than Benafel, so if he can stall out the game, he should be able to take it. 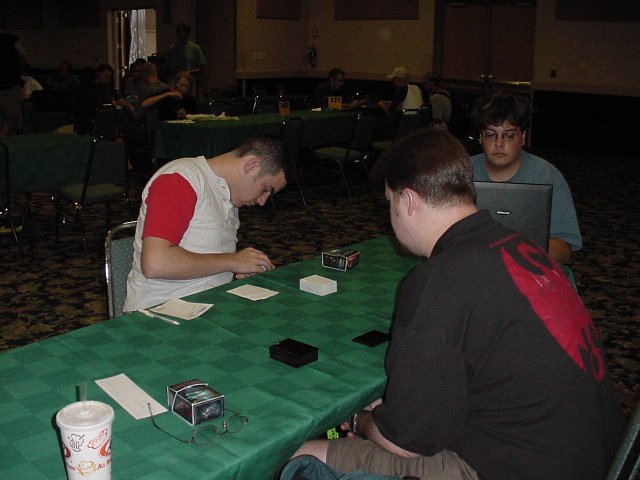 Benafel starts off fast with a Stormscape Apprentice and Galina's Knight, but Kastle Fires up the weenie, and Fact or Fictions up some more answers. Still the knight is a pain as most of Kastle's removal is red (Fire/Ice, Urza's Rage etc), but he does have Recoil, Void and Spite/Malice in his deck to deal with the Knight, despite taking many early beats from it he calmly Fact or Fictions again, gaining more and more counter magic. It should be noted that Benafel beat "Baby Huey" earlier in the tourney using the same tactic, giving his opponent unbelievably juicy card piles, so long as they get very little to control the board with. (He had made a previous split with Jensen that had 2x Absorb and Exclude over a Tapper and Spectral Lynx). While the hard working Galina's Knight keeps plugging away at Kastle's life total, Kastle fires off a third Fact or Fiction, this time netting him his 4th FoF and a land. Benafel's attempts at adding to his bare knight are constantly countered by Kastle, but he simply cannot seem to find a way to get rid of the knight. Since Kastle's deck has absolutely no creatures (not even a Crosis as a finisher) it allows him to make Benafel's Fact or Fiction's easy 4-1 splits, the threat or the creature removal and lands. A surprise Tsabo's Decree by Kastle sweeps out the knight (with him at 7) and reveals a hand full of useless Respulses in Benafel's. From there on in, it was just a matter of time and card advantage. While Kastle built up the mana to Rage Benafel out of the game.

Heading into round 2 with 22 minutes on the clock (time management is a real buzzword among these two), Benafel looked to be digging heavily into his sideboard (probably tearing out the worthless Excludes and the very so-so Repulses) for Gainsay and more action cards, perhaps even Unnatural Selection to get around those brutal Tsabo's Decrees. Kastle seemed confident and did not seem to make too many changes. Benafel seemed intent on getting Kastle to hurry, but Darwin progressed at a normal pace, no faster, but no slower either. 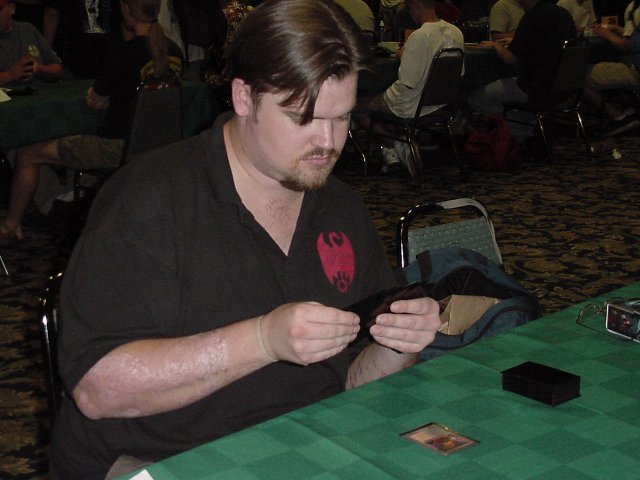 Playing first, again Benafel busted out with the Stormscape Apprentice, but had no drops to back it up on turn 2 or 3. This suits Kastle to a T, since he now has counter magic up and running, and faces very little pressure in the form of a single 1/1. A turn 5 Lynx hits the table for Benafel with some help from Gainsay, but this gives Kastle a window to Fire up both and sweep his board. An FoF during the next end step is pure gas with 2x Tsabo's Decree, Void, Exclude and Fact or Fiction (it nets Kastle a pair of Decree's and Exclude). Interestingly, when Kastle "Decrees" on Wizards (nailing a Meddling Mage) it reveals Benafel's hand of Repulse and Exclude, which will still be bad against Kastle's total lack of creatures, or so we thought! Turns out that Kastle did bring in creatures, Emblazoned Golems. After a Void for 3 by Kastle, sweeping out all of the counters and bounce, he landed the 4/5 artifact monster, totally halting Benafel's ground forces (which only consisted of a single Galina's Knight anyway). Another 3/4 Golem hits the table a couple of turns later, and the works are totally gummed up for Benafel. As if that was not enough, another FoF later and a THIRD colorless Golem hits the board, and Kastle is swinging for the fences, rolling over Benafel completely and forcing a concession.