Round 11: Diego Ostrovich vs. Phil Freneau 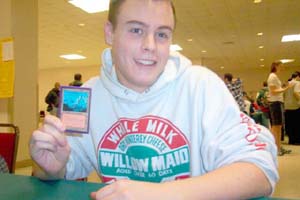 Phil Freneau's been doing pretty well for himself since abandoning thoughts of retiring from the game. His victory and Grand Prix - Los Angeles last year was all the incentive he needed to stay, and he admits with a smile that leaving was "probably never possible". Now he's tearing up the swiss this weekend, with Red Deck Wins 2K2. He's facing a nightmare match in Argentina's Diego Ostrovich. The Magic Invitationalist and Worlds Top 4 competitor is playing his own version of Big Green, a deck that powers out the likes of Deranged Hermit with Rofellos and Gaea's Cradle. It also features Call of the Herd and Ravenous Baloth, trouble for the red mage.

Freneau led with a fetchland and Jackal Pup, a fine start. Ostrovich had no turn one play, so Freneau was free to add a Mogg Fanatic. Ostrovich tried Rofellos, but the Fanatic was ready to take it down, clearing a path for the Pup. Freneau made a face-down creature and ended his turn.

"I wonder what that is?" - Diego Ostrovich

"It's a Battering Craghorn." - Phil Freneau

Ostrovich's next play was exactly what he needed: Call of the Herd. Freneau's facedown charged in, and was revealed to be the Blistering Firecat everyone knew it was. He had no other play. Ostrovich flashed back his Call and followed that up with Deranged Hermit, while Freneau had only lands and Seal of Fire. Ostrovich dropped him to seven, then tapped out for Ravenous Baloth and another Rofellos. Freneau scooped it up. 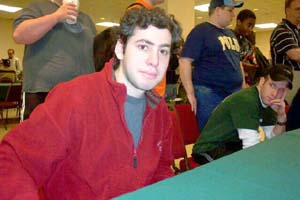 Freneau boarded in the land destruction package for Game 2. He played first, but didn't have a kill spell for Ostrovich's Rofellos. Stone Rain made sure it couldn't enable more than Ravenous Baloth. The next turn he tried Pillage, and this time Ostrovich had no additional land. Unfortunately, that meant that he was bashing for six. Freneau Pillaged again. Ostrovich hit again and played a forest.

Too late, Freneau drew his Volcanic Hammer. He Hammered Rofellos and hoped to survive to hide behind his Fledgling Dragons. Ostrovich bashed him to two, then played another Rofellos. Freneau drew, and scooped.