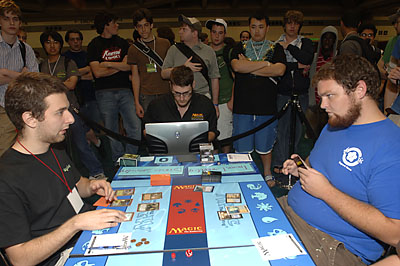 his is it, the battle for sole leadership of the standings. In one corner, we have Thomas Drake. If Thomas was a rookie to the Feature Match area a few hours ago, having three consecutive feature matches should make him a grizzled vet by now. Staring him down from across the table is Steve Sadin. Steve is rocking his second constructed choice for the tournament after a… let's just say "mishap" with his first choice. Standard aside, Steve went on an amazing 7-0 tear in the Limited portion of the event to end up where he is now.

Both players featured versions of the Blink decks that have been so popular this weekend. Thomas is running the sporty blue-white-red Touch-Blink version, while Steve is running the more conservative and fuel-efficient blue-white-green version.

Thomas begins to get his deck online with a turn-two suspended Riftwing Cloudskate. Steve follows with his own two drop, the ever-present Tarmogoyf. Thomas followed his suspended 'Skate with the powerful Grand Arbiter Augustin IV, but Steve had a Remand at the ready. Another day, Mr. The Fourth. Steve used his next turn to suspend an Aeon Chronicler for one.

On Thomas's following turn, his Cloudskate hit play, returning Steve's Treetop Village to his hand. The Village had gotten in for a beat earlier, and was ready for a rest anyway. Thomas pondered his next play for a bit before eventually deciding that he'd retry the Arbiter now that Steve was tapped out. Now it was Sadin's turn to go into the tank. Eventually he came out with an attack by his 6/6 Aeon Chronicler and his other Treetop Village. The Village people brought Thomas down to a mere 5, but if he chose not to block, it meant he had something up his sleeve.

That something was an enhanced Court Hussar and a pass of the turn. A bit anticlimactic, but who am I to judge? The Hussar did his job and jumped in front of the train that is Aeon Chronicler. When Steve passed his turn, Thomas ran an Aethermage's Touch out there and snagged himself a Bogardan Hellkite. Five to the face, please. That put Steve down to 11, and after a swing took him down to 4, Steve conceded.

One of the things you have to be careful about in the touch-Blink deck is the chance that your Aethermage's Touch whiffs. Even when you hit a creature, sometimes it ends up being a Court Hussar, which immediately dies. That being said, I will admit that I've seen a large number of large Dragons springing forth to wreak havoc on the game state. And Touching in a Hellkite at your opponent's end step is a usually 10 damage right there. Add in the Momentary Blinks and it's easy to see what makes this deck so attractive to players. 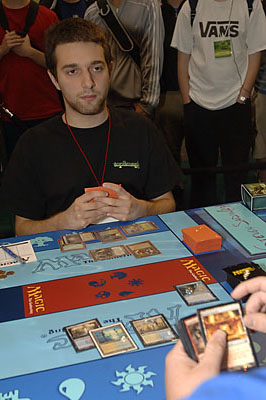 The blue-green-white blink deck is no slouch either, though. Its major advantage comes from its lightning-fast mana acceleration thanks to Wall of Roots and Edge of Autumn. It also has access to Mystic Snake and the über-powerful Loxodon Hierarch. Those, combined with Momentary Blink, can lock a game just as well as the Hellkite can.

Between the games, Steve noticed that a couple of Thomas' cards were developing some wear and asked for a judge to check things out. He didn't think Thomas was cheating, but he did want to make sure that things remained completely random. The judge pulled a couple of cards that had developed some random wear patterns on them and asked Thomas to resleeve them. Let this be a quick lesson to all budding players out there to always make sure your cards and sleeves are in good repair. No one wants to be accused of cheating when they aren't, and it's often hard to tell the difference between honest mistake and crooked gambit. Just be safe, especially at this high level of competition.

The second game started off with Steve ramping his mana up with a turn-two Wall of Roots, and Thomas using a Boros Signet to speed himself up. Steve made the first contribution to the board with a morph. When Thomas tried to play Avalanche Riders, Steve delayed the inevitable with a Remand. He then dropped another beater with a Tarmogoyf.

The Riders hit next turn, taking a Hallowed Fountain with them. Steve sent his 'Goyf in for two on the following turn and sent it back to Thomas. Thomas spent the next couple of turns doing everyone's favorite tricks with Avalanche Riders and Momentary Blink to take out another of Steve's lands and keep his Riders around. They started to hit Steve for 2 a turn now as well, since his Wall of Roots had gotten below 0/3 status. 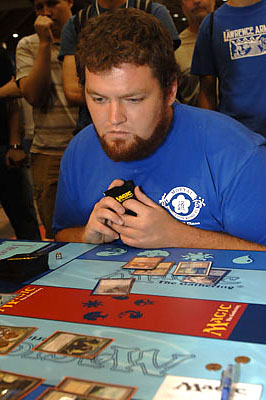 Despite his dwindling mana sources, Steve still had a Tarmogoyf in play, and he used it to keep hacking away at Thomas's life total. A Court Hussar from Thomas prevented the offense from getting too crazy, though. There were only instants and dead lands in the graveyards. Steve started sending his morph in as well, and when Thomas blocked with his Riders and Court Hussar, Steve used his Momentary blink to turn the vanilla morph shell into a huge Akroma, Angel of Fury.

Thomas had no play on his next turn and sent things back to Steve with a lot of untapped lands and cards in hand. Steve took advantage of Thomas' unwillingness to play anything by activating a Treetop Village and sending it, his angel, and a 3/4 Tarmogoyf into the red zone. A Bogardan Hellkite explained the pass from Thomas as he killed the Treetop Village and did enough damage to the Akroma that the Dragon could trade straight up. A Numot, the Devastator from Thomas meant that there were more lands headed to the bin for Steve. An-end-of-turn Aethermage's Touch netted Thomas an Arbiter to power out his next turn as well.

Thomas used his Numot to continue the job his Riders had started earlier, leaving Steve with a single land and three Wall of Roots as his only mana sources. A couple of swings later put Steve Sadin out of the game.