The final round of the Swiss, and the Nordics from Original Slackers are facing down Bottom Set--or Bob Maher, Neil Reeves, and Dave Williams, as most people know them. Maher and Reeves are looking for a repeat Top 4, while their former teammate Gary Wise was battling it out at the other feature match table. 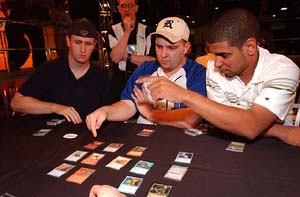 Bottom Set was to kick off the draft and opened up Cleric power card Cabal Archon, along with overall good cards Shock, Pinpoint Avalanche, Wirewood Elf, and Spitting Gourna. Reeves picked Cabal Archon and Williams scooped up Shock, shipping the rest to Original Slackers. Crnobori took Wirewood Elf in the green seat, while Smith took Festering Goblin and Osterberg took Pinpoint Avalanche. Maher wheeled Spitting Gourna and Crown of Awe and shipped a Daru Healer back to Original Slackers. It made it past the Nordics into Dave Williams' pile.

Williams proceeded to open a Pacifism for his deck but had to ship Wirewood Savage, Clone and Catapult Squad to Original Slackers. They were picked in that order by them, and Maher added an Explosive Vegetation and Wave of Indifference to his deck. The first pack to be opened by Crnobori had quite some goodies in it. Crnobori took another Wirewood Elf out of it, while Smith took Smother and Osterberg a Lightning Rift. The Rift was source of quite some agony for Original Slackers as they were arguing the entire time during the review period where they should allocate that. After Osterberg picked up the powerful enchantment, Bottom Set divided up the rest of the playables, with Pinpoint Avalanche and a d-drafted Disciple of Grace going to Maher, a Nantuko Husk and Festering Goblin going to Reeves and Pacifism and Weathered Wayfarer going to Williams.

The fourth pack of the draft featured among others an Anurid Murkdiver--a card that's rather ridiculous in the black on black matchup. As Smith had to play Reeves's monoblack deck he didn't hesitate and picked the Zombie Beast. Osterberg picked up Glory Seeker and Bottom Set picked Threaten, Skirk Commando, and Ascending Aven in that order. Crnobori wheeled Tranquil Thicket and Goblin Sledder, and the Symbiotic Elf that was still left in the pack ended up at Maher's stack of cards.

Osterberg opened up an Aven Soulgazer for his deck, which was shaping up pretty well. Maher picked up a Wirewood Savage over a Snarling Undorak which Williams d-drafted from Crnobori, and Reeves picked up an Erratic Explosion for his deck. Smith still got a Voidmage Apprentice from the pack, but that was the end of the playables. Maher's pack, however, contained exactly nine playables, the worst to open if the other team gets to divide six of them. Maher picked Snarling Undorak while Reeves got a Sparksmith for his deck and Williams picked up a Riptide Shapeshifter, definitely shifting into blue there. Crnobori got a Snapping Thragg and a Battering Craghorn for his deck, Smith picked up a Dirge of Dread and Lonely Sandbar, settling into a somewhat unfavorable matchup, and Osterberg received a Gravel Slinger and Convalescent Care for his white-red deck.

The first Legions pack of the draft didn't provide a much hoped-for Timberwatch Elf for Maher, who instead had to settle for d-drafting an Echo Tracer, as there were no in-color cards for him in the pack. Osterberg picked up a Gempalm Avenger as an additional cycler to go with his Lightning Rift and a Soldier to use to amplify for any Daru Stingers he could still get. Smith picked up Sootfeather Flock while Crnobori picked up a Flamewave Invoker. Williams wheeled an Akroma's Devoted and a Liege of the Axe from the pack, and Reeves ended up with a Skirk Drill Sergeant and an Unstable Hulk.

Osterberg opened up a rather average pack for his Legions, with a Delfblade Elite being his first pick, Keeneye Aven being Smith's pick, and a Skirk Marauder ending up in Crnobori's deck. Williams picked up a Wingbeat Warrior and Warped Researcher, Reeves an Embalmed Brawler and Magma Sliver, and Maher had to settle for a Patron of the Wild and Nantuko Vigilante. The Nordics were about to be hurt for not having a white mage in the middle seat as they opened up Windborn Muse along with a Timberwatch Elf. The Muse was counterdrafted by Smith, while Crnobori slammed the Timberwatch down. Williams took Whipgrass Entangler over Swooping Talon and Reeves took Deathmark Prelate. Maher picked up Wirewood Channeler, a very powerful card in the green mirror, but he had to ship a wheel of Swooping Talon and Echo Tracer to Osterberg. On the way back he picked up a Needleshot Gourna, though, and Williams received a Daru Sanctifier.

The next Legions pack had Original Slackers argue between Crested Craghorn and Stonewood Invoker for Crnobori's deck. They ended up with picking the Craghorn and shipped another Whipgrass Entangler to Williams, a Skinthinner to Reeves, and an additional Echo Tracer to Maher, who looked like he would be splashing blue with his Explosive Vegetation and Wirewood Channeler. Osterberg picked up another Gempalm Avenger for his deck, along with a Clickslither that was unlikely to make his deck, and Smith drafted a Withered Wretch and d-drafted the Stonewood Invoker.

Williams opened a Daru Stinger in his next pack and a flurry of hand signals made it clear he definitely didn't want his opponent to have that card. In the end he took it himself, even though it was only mediocre for him up until that point. Reeves drafted a Corpse Harvester and Maher picked up a Krosan Vorine. Smith took a Cloudreach Cavalry and Gempalm Incinerator from the pack, Smith a Mistform Seaswift and Drinker of Sorrow, while Crnobori added a Skirk Outrider and Needleshot Gourna to his deck. The goodies were still in the pack after that though, with Maher picking up a Covert Operative and Berserk Merlodont, and Reeves drafting a Sootfeather Flock and Embalmed Brawler, both of which were likely to make his deck. The final Legions booster was decidedly mediocre, with a Vile Deacon for Reeves and a Wall of Deceit for Maher as their first picks. Osterberg picked up a Flamewave Invoker from the pack, Smith a Lowland Tracker, and a Needleshot Gourna for Crnobori, and there were no more playables left after that.

The Scourge booster Reeves opened, however, was packed with goodies. A Putrid Raptor for him and a Daru Warchief for Williams made nice additions to their decks, but they had to ship an Accelerated Mutation to Maher's opponent Crnobori, a Clutch of the Undead to Smith and an Aven Farseer to Osterberg. Maher picked up a wheel of Temple of the False God and Shoreline Ranger, and had to send a Carrion Feeder back to Smith. Williams opened up the next Scourge booster and took a Zombie Cutthroat from there as there were no better white or blue cards. Crnobori received a Dragon Mage as a solid win condition, and Smith picked up a Frozen Solid. Extra Arms made it to Osterberg's deck, and Maher wheeled a Titanic Bulvox and Riptide Survivor. Goblin Brigand made it to Reeves, and that went straight into the main deck. 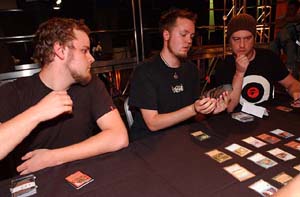 Original Slacker's first Scourge pack had some powerful cards for them. A Carbonize for Crnobori, Zombie Cutthroat for Smith and Dawn Elemental for Osterberg. Maher received an Aphetto Runecaster from the pack, while Reeves picked up another Goblin Brigand along with Death's Head Buzzard. Williams received a Frozen Solid from there, giving him a way to deal with the Elemental should it ever attack. Smith opened up the next booster, and the cards were divided rather quickly. A Rush of Knowledge for the blue-black mage, and an Eternal Dragon for the white-red mage that had the Lightning Rift. After that it was time for Bottom Set to salvage whatever there was left in the pack. Alpha Status made it to Maher, Lingering Death to Reeves, and Zealous Inquisitor to Williams.

Up next was a d-draft for Original Slackers, though. An Undead Warchief for Reeves's deck would've pushed his matchup into the American's favor too much and Osterberg took it from the pack before Bottom Set got to divide it. Maher picked up a Fierce Empath from the pack, Reeves still got a Clutch of the Undead from there and Williams ended up with an Aven Farseer. All that there was left for Crnobori and Smith was a Krosan Drover and a Scattershot. The final Scourge booster was a nice one for Bottom Set. Frozen Solid gave Maher a way to deal with the Dragon Mage and Timberwatch, while Putrid Raptor gave Reeves a way to put on the pressure some more. Dragonstalker was Williams' pick. Original Slackers took a lot of quality cards for their decks what was left in the pack, with Goblin Brigand going to Crnobori, Bladewing Thrull, and Death's-Head Buzzard for Smith, and Dragon Scales and Wipe Clean ending up in Osterberg's stack. Reeves picked up a Spark Spray in the remains of the pack, and Maher picked up a Temporal Fissure.

Overall, it seems as though the draft was really close. The quality of the packs that were opened was about even, with a slight advantage going to Original Slackers. However, the matchups that the two teams ended up with seem to be rather close. Dave Williams's deck is powerful but he has to face Rickard Osterberg's white-red deck that has Lightning Rift, Eternal Dragon, and Dawn Elemental. Rickard's deck does have a rather high-end curve though, so if Dave gets a quick start he should be able to win. If Rickard starts off with some of his powerful cards, though, he will take the American down. Neil Reeves seems to have a good matchup against Jake Smith summarizing it best in:

"Outside of him having a matchup advantage, I think that Spark Spray in the last booster is going to take me down."

Finally, there is the matchup between Bob Maher and Lovre Crnobori. From a rather cynical point of view, one could just say Lovre has the advantage since he's ahead in the Timberwatch count. He has one, Maher doesn't, so if he draws it, he'll win. That sentiment has been echoed ever since Legions was released. However, Maher does have a couple of Echo Tracers and an assortment of evasion creatures, so he has a shot of taking down Crnobori. Still, the question is if that's enough to overcome the fact that he doesn't have the Timberwatch.