Shuu Komuro (Gifts Rock) and Masashiro Kuroda (Goblins) are both on the bubble, and both of these Japanese players are high-profile card-slingers. With 21 points, they can't afford to pick up another loss on their way to the Top 8. It's an incredibly exciting Day 2 of the Pro Tour, because almost everybody has a shot at a chair at the final tables. But at 21 points, no player could afford to drop a match. Both players had come to Valencia on PTQ victories, and there was more at stake here than just the Top 8 race: A win would guarantee a Top 50 finish, and the invitation to Pro Tour–Kuala Lumpur at the start of the next season. Seeing either one of these two Japanese champions, or even both, back on the PT train should be exceedingly exciting. 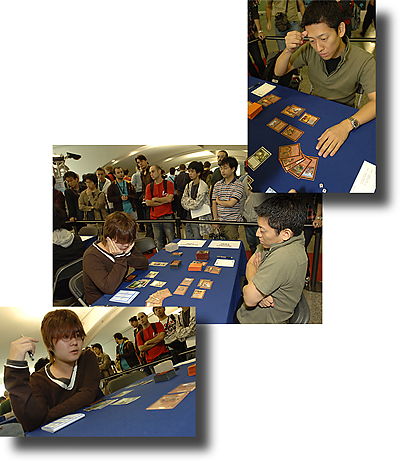 Japanese powerhouse Shuu Komuro and Masashiro Kuroda both need the win here to have a chance at Top 8. Komuro won the die roll and lead off with Sakura-Tribe Elder, while Kuroda kicked off in true Kuroda fashion with two Unglued Mountains (beautiful lands, by the way!) and a Goblin Piledriver. Shuu Komuro used Unhinged basic lands, but clearly, Kuroda had the style fight in the bag, old-school.

Komuro liked his lands, as he went for Eternal Witness regrowing a Windswept Heath, not a bad play if you follow it up with Cabal Therapy as he did. Komuro hit nothing on the first try, but he saw two Simian Spirit Guides, Goblin Piledriver, two Goblin Ringleaders, and Blood Crypt.

Kuroda had one turn before Komuro could flashback the Therapy, and he used it to good effect. Simian Spirit Guide and three lands payed for Ringleader, which revealed Goblin Piledrvier and Goblin Sharpshooter. A second Simian Spirit Guide powered Mogg Fanatic to kill Witness and to take away the opportunity to flashback Therapy, and Kuroda rode in for 5. Komuro had a second Witness, regrowing his Therapy naming Goblin Sharpshooter, leaving Mogg Fanatic, Goblin Matron, Goblin Ringleader, Goblin Piledriver, and Skirk Prospector in Kuroda's hand.

The Mountain's master had to think about his next play. Would he just Fanatic away the Witness, or make another Ringleader? He had freshly drawn a Chrome Mox, so Kuroda went for the Ringleader plan. Good choice, as he revealed Skirk Prospector and double Siege-Gang Commander, and Komuro simply packed it in.

Those Unglued Mountains look simply awesome. They befit a player who has been around as long as Kuroda, and who has a legacy of designing red decks that win. And he wasted no time showing off his goods. Chrome Mox enabled a second-turn Goblin Warchief. Komuro had the Putrefy to kill it. That was step one of Komuro's plan for board domination: Destroy your opponent's forces. Step two: Disarm your opponent completely. From Komuro's sideboard, Engineered Plague—"Goblins?" Kuroda asked before putting his two Goblins into his graveyard—provided pretty good crowd control. Step three: Find a way to win. Loxodon Hierarch seemed perfectly fine, and soon tapped to lumber over.

But Kuroda demonstrated his cleverness as a deckbuilder by calling his forces to Dralnu's Crusade, because crusading Goblins shrug off plagues. Goblin Warchief lead the charge with the promise of fast and hard attacks. As Komuro urged his Loxodon Hierarch further forward across Kuroda's Mountains, Kuroda played a fresh Ringleader, getting Mogg War Marshal, Skirk Prospector and Mogg Fanatic. His board tripled, as he had the mana to play them all. Eight damage by means of little men came Komuro's way, dropping him to 13 life (Kuroda: 11).

Komuro knew he had to react. Gifts Ungiven made Kuroda choose between Vindicate, Engineered Plague, Loxodon Hierarch and Eternal Witness, and he wasted no time to put both removal spells into his opponent's graveyard. Komuro, though, had another Vindicate in hand, bringing Kuroda's Crusade to a grinding halt and rewinding Kuroda's earlier Goblin explosion. Back to a Ringleader and a Warchief, and facing a back-breaking potential second Engineered Plague, what would Kuroda do?

Nothing, even though the Ringleader revealed 3 Mogg Fanatics and a Gempalm Incinerator. Komuro's road to domination was completed when three Loxodon Hierarchs scaled Kuroda's mountains like Hannibal's elephants scaled the Alps.

Would Komuro and his elephants share the ultimate fate of Hannibal, though, or would the Japanese version of the ancient invader fare better, keep his elephants alive, and win the war?

He had a mulligan on the play, and Kuroda made his customary first-turn Unglued Mountain. Pendelhaven, in the original Legends version just as it behooves a legendary player, lead to Goblin Piledriver. Komuro had Therapy, but hit neither Ringleader nor Goblin Matron with his guess.

Kuroda wanted to prevent the flashbacking of Therapy and cycled Gempalm Incinerator to kill Komuro's Birds of Paradise. The Ringleader gave him Mogg War Marshal and a second Piledriver. Komuro was in trouble. Though he paid four mana for Loxodon Hierarch to mount his elephantine assault again, the threat of a gigantic double Piledriver attack in the near future loomed. Kuroda attacked, taking Komuro to 13, and searched for a Goblin Warchief with the original Boggart Harbinger, Goblin Matron.

Vindicate from Komuro killed the Piledriver already in play. Kuroda had just four mana to work with. Goblin Warchief saw the light of day, powering out Mogg War Marshal and his minion, to take Komuro to 11. Slowly, the master was pecking away at Komuro's life total, but with just eight minutes left on the clock, he'd have to hurry up...

Komuro Therapized and discarded Goblin Piledriver from Kuroda's hand, seeing Therapy, Warchief, Siege-Gang Commander and Mountain. Kuroda drew a Goblin Ringleader, but the game was already over: Warchief #2 made Siege-Gang Commander affordable, and eight attacking creatures took Komuro down to 2 life. Seeing no out and no Engineereed Plague, Komuro lost the battle and the war.