Round 11: Elephants on Parade

L. Stanton is one of those pieces of ancient Pro Tour history that few people know about. A former reporter for The Sideboard from waaaay back in the day, he's met Zak Dolan and perhaps every World Champion at one time or another - and is willing to regale those patient enough to listen to him with hours of tales about forgotten people and deeds of Magic's yesteryear. That's why it's somewhat surprising to find Jack, Steve Jarvis, and Alex Sittner sitting at table two here in Charleston, especially this late in the tournament. Everybody knows the old guard can no longer play and expect to win, right? 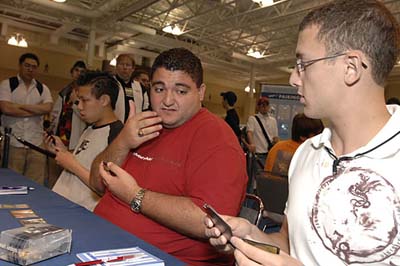 Antonino De Rosa, Alex Lieberman, and Ken Ho are out to prove just that. De Rosa is coming directly off of a win at Grand Prix-Toronto, Lieberman is one of the best new American pros to hit the scene in some time, and Ken Ho… well, Ken Ho holds a Pro Tour and a Grand Prix title from a few years ago. When asked if Ken Ho was the least remembered of the modern-era Pro Tour winners, Ken responded, "Hey, I've forgotten about me. I'm a different man these days."

He's apparently still pretty good at the game though, since he and his teammates are still near the top of the contenders trying to make an appearance on Sunday.

"Yer taking up a lot of room over on your side of the board," noted Ho. "You've got the cows, the Atog, random stuff..."

"I play a quick deck," responded Stanton. "I only need about two permanents or so."

Jarvis was down a game in the A seat before Stanton had even finished resolving his mulligan, keeping his second set of six. He also had to be pleased with his start, casting Birds of Paradise on turn 1 and Selesnya Guildmage on turn two. Ho chose to Electrolyze the Birds and Stanton, while the Utah native cast a second Guildmage and began to beat down. Dream Leash two turns later stole one, but Indrik Stomphowler brought the traitorous mage right back to Jack's side of the board. Faith's Fetters neutralized the Stomphowler, but the bear beatdown proved to be too much for Ho to handle, though he did get to see Stanton cast Congregation at Dawn for three elephants before "pachyng" it in.

Stanton's win was the only one on his team thus far, as his two teammates failed to draw combinations of lands and spells, thus making it difficult to win a game. Of course, as soon as those words were typed (and while Ho and Stanton were still sideboarding), it was Lieberman's turn to concede in the face of Helldozer destruction. De Rosa wrapped up his win in no time at all, giving the Big Timers the early result.

"Good news guys… he has no land," Jarvis notified his teammates soon into Game 3. He quickly smashed Lieberman into tiny pieces, leaving the outcome of this match riding on old JLS. 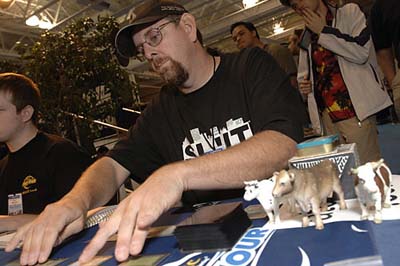 Stanton's cows stood at the ready.

Two Faith's Fetters from Ho meant the elephants did not go on parade, but Stanton was able to cast Privileged Position directly after that to make certain none of his creatures would be targetable. Ho was again non-plussed by this, casting Tibor and Lumia to give him a non-targeted way of killing weenies.

Stanton rebuilt with Coiling Oracle and another Guildmage followed by Civic Wayfinder and Demand, tutoring up Simic Sky Swallower. The Sky Swallower resolved a turn later and Jack attacked, making the life totals 18-11, still in favor of Ho. Ken made the very interesting play of Faith's Fetters on his own Steam Vents, giving him a four-life boost on his now-flooded board. Ho continued to draw blanks while Stanton drew action card after action card, and finally finished off Ken with around 20 minutes left in the round, sealing the victory Atogslc.com.