Round 11: Eugene Harvey vs. Andrew Ranks 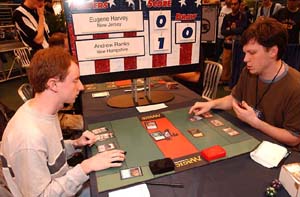 At this time last year, people were asking the same thing about Eugene Harvey that is bound to be asked about Andrew Ranks: "Who is this guy?" Approximately 365 days ago, Eugene Harvey exploded on the competitive Magic scene, grinding into Nationals and taking a spot on the National team. Between then and now, Harvey has proven himself to be one of the game's top players. If Andrew Ranks' performance this weekend is any indication, he may also turn out to be the next big thing. Going into this match, he was 10-0, a feat only matched by Mike Long. A win against Harvey here would give him the biggest undefeated streak in the history of United States Nationals at 11-0.

Harvey mulliganned his opening hand. He played Hypochondria on turn two, but missed his third land drop. Ranks summoned Cephalid Sage, and followed up with Carrion Wurm on the next turn. Harvey had to Obsessive Search to finally find his third land. Meanwhile, Ranks had Aven Windreader. Pure and simple, this was a textbook mana screw loss.

Harvey summoned Hapless Researcher on turn one, and continued his curve with Aquamoeba. Meanwhile, Ranks played a Dusk Imp. Ghostly Wings enchanted the Aquamoeba, and Harvey discarded a madness Obsessive Search to deal four damage total. The Imp attacked back, and now Ranks was the one who was mana screwed, missing his fourth land drop. Harvey attacked with both his creatures once again, and Ranks cast Keep Watch. The Researcher was sacrificed in response, which caused Ranks to only draw one card. Still, he finally made his fourth land drop, and cast Wonder. Harvey played Peek, and saw Carrion Wurm, Ghastly Demise, Aven Windereader, Toxic Stench and Filthy Cur in Ranks' hand. Harvey had yet to draw a white source of mana.

The Aquamoeba attacked and Ranks double blocked it with Wonder and the Imp. Harvey Repeled Wonder before damage, gaining massive card advantage as the Imp headed to the graveyard, and Wonder went back to the library. This also set Ranks behind another turn in trying to find his fifth land so that he could play the more powerful creatures in his hand. Wonder chump blocked Aquamoeba on the following turn, and Harvey brought out Ambassador Laquatus. It attacked along with Aquamoeba, and Ranks cast Keep Watch to draw two cards. He then cast Ghastly Demise on the Aquamoeba, and Harvey let it die. Harvey finally played his first white source and summoned Mystic Zealot, while having seven cards in his library.

Ranks summoned Carrion Wurm, while Harvey fortified his defense with Shieldmage Advocate and Thought Eater. The Wurm attacked, and Harvey took three cards out of his graveyard. Things were looking much worse for Ranks, as Harvey attacked with his team, and brought Wonder back with the Advocate to nullify the universal flying effect. Ranks had Aven Windereader while Harvey summoned Phantom Flock, but Ranks had Repel to slow things down. Still, things did stabilize, and Harvey had the edge thanks to the Advocate. Plus, a combat stalemate was in his favor due to Laquatus.

Harvey gained threshold with a self-mill by Laquatus, and attacked with Phantom Flock and a Zealot. Ranks cast Keep Watch to draw two cards. He then chump blocked the Flock with Wonder, and took three damage. Laquatus got to work on Ranks' graveyard, but Toxic Stench banished the legend to the graveyard. Cephalid Sage helped Ranks dig into his deck for a way to break out of the stalemate. He summoned Hapless Researcher, and ended his turn. Harvey attacked with his Zealot and Flock, and Ranks sacrificed the Researcher to discard Wonder. He blocked, but Harvey used his Advocate to save all his creatures, while Ranks lost a Windreader in the exchange. The Advocate brought back Wonder on the following turn, and Harvey's flyers came over to finish up the job.