Round 11: Everybody Loves Dimir 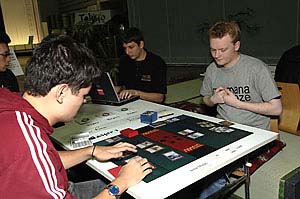 Romão and Frank Karsten are currently second and fourth in the standings, respectively, and drafted next to each other at table one before Round 10. In fact, they both ended up drafting the Dimir Guild, a fact that should favor Romão since he was passing to Karsten in packs 1 and 3. Karsten is splashing red for Viashino Fangtail and Galvanic Arc, while Romão has only blue and black.

Karsten is a solid player with a recent top 8 in Nagoya, while Romão is a former World Champion who would undoubtedly love to grab another shot at the title. They played each other two rounds previous and ended up with a draw.

Romão applied some early pressure with a Halcyon Glaze (cast through a Terrarion, since he only had one Island) but Karsten put a stop to that with Clutch of the Undercity. The Dutch player then took control of the skies with Cerulean Sphinx. Romão summoned Dark Confidant, which surprised Karsten, who commented, "Risky business…uh, yep." He attacked Romão to 12 and then used Tidewater Minion to power out a turn-eight Nullstone Gargoyle. 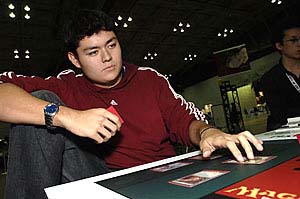 Romao, the 2002 World Champ, was moving up the leaderboard.

Romão revealed an Island with the Confidant and dredged a Stinkweed Imp that traded with the Gargoyle. This allowed him to Peel from Reality Karsten's Sphinx and his own Confidant, a fine play since he was at a precarious 7. When Romão added Belltower Sphinx and a new Stinkweed Imp, it looked like he had the game locked up, as he also had a Vedalken Entrancer that was slowly grinding away at Karsten's library.

That is, until Karsten summoned an Ethereal Usher. With two cards left in his deck, he activated it on Tidewater Minion and re-activated on Cerulean Sphinx, then attacked with both for the potential win. Romão had the Disembowel though, and was able to take down the Minion to stay at 2, then untap and dig with card drawing for his Darkblast. He took down Karsten's only blocker and killed him with damage.

The early turns consisted of trading creatures, but when Karsten followed up with Mausoleum Turnkey and Ethereal Usher, Romão struggled to keep up. The Usher was huge this game, as was as a key play where Karsten transmuted for Consult the Necrosages and knocked a Disembowel out of Romão's hand. Mausoleum Turnkey returned a Roofstalker Wight and also just kept coming across for three a turn, with Romão unable to stop the damage. Clutch of the Undercity finished things off.

What the attacks don't show you is that Karsten had a turn-three Viashino Fangtail followed by a turn-four Tidewater Minion. Romão's hand wasn't helped by the fact that his Golgari Thug jumped back on top of his library when it died, and whatever semblance of board position he had crumbled quickly thereafter. The final straw came when Romão cast Compulsive Research and chose to dredge Darkblast, then watched the Disembowel that he would have drawn fall right into the graveyard. He conceded on Frank's next turn.