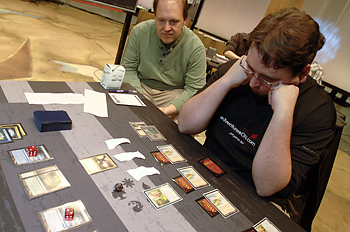 Luis Scott-Vargas at the Heights of his power.Luis Scott-Vargas continued his tear through Pro Tour–Kyoto entering Round 11 with an unblemished, 10-0 record. That was after four rounds of Standard play followed by six rounds of Shards / Shards / Conflux draft. For the rest of the day, however, he’d be in the hot seat piloting his Black-White Tokens list again. Prior to the match he commented on the fact he thought the deck was good, but mentioned that a group of his teammates, playing a nearly identical list, had gone a combined 2-10 in Standard so far on the weekend.

Also stepping in to the Arena was French pro Yann Massicard. He hadn’t seen as much action under the bright lights of the Arena over the course of Friday and Saturday, but being paired against an undefeated player so late in the Pro Tour spoke loudly about his playing ability.

Winning the die roll, Yann started with a Vivid Creek while Luis played a “comes into play tapped” land of his own in Windbrisk Heights.

The first spell to hit the board was Glorious Anthem from the American player. Yann considered his options. He could counter the spell, but Scott-Vargas was likely trying to bait counters out of Yann’s hand so he could resolve deadlier spells later. Massicard let the Anthem resolve, then used Esper Charm to blow it up immediately. A second copy of the card resolved on Luis’ next turn, and he played a third Windbrisk Heights before shipping things back to his opponent. Massicard, looking to stay even, used a second Esper Charm to answer the second Glorious Anthem.

Cloudgoat Ranger from Luis Scott-Vargas was countered by Broken Ambitions, revealing Broodmate Dragon on the top of Massicard’s deck. He (wisely) decided to leave it on top, dropping 8-power worth of flying attackers onto the board on his turn. That left the Frenchman tapped out, however, just long enough for Luis Scott-Vargas to play Cloudgoat Ranger. With triple copies of Windbrisk Heights on the table, the four creatures were a huge threat, potentially representing an Ancestral Recall for Luis should they successfully enter the red zone.

Not intimidated, Yann bashed for 8 with his Dragons, putting the totals at 20-12 in his favor. Luis was all too happy to get initiative back, sending his team sideways for 6. It also enabled him to activate his first Heights, dropping Tidehollow Sculler into play. That forced Yann’s hand, and he dropped Cloudthresher onto the board, putting the totals at 18-10 in his favor. What he wasn’t able to do was stop the 10 points of damage from Luis’ swarm, falling to 7. Post-combat, Luis played a Reflecting Pool, with exactly enough mana to activate his final copy of Windbrisk Heights for a Spectral Procession for three blockers.

Yann wasn’t going down like that, however. He peeled the top card of his deck, nodded contentedly, and revealed Volcanic Fallout. The instant wiped Luis’ board of blockers, dropped the former Pro Tour Champion to 8, and cleared the way for Massicard to attack with Cloudthresher and his two Dragons for lethal. 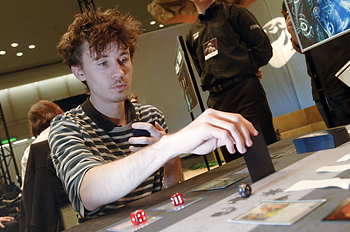 Frenchman Yann Massicard fights to remain undefeated.A mulligan was the first play for Luis Scott-Vargas to kick off the second game. While many players might be disappointed with beginning in such a manner, Scott-Vargas had already won a match on the weekend despite mulling to five in not one but two games (both of which he won). He kept his six, and Massicard soon evened things out with a mulligan of his own. Unhappy with his second hand, he was forced to ship it back for five.

Luis sought to punish the card-light Massicard with a second-turn Bitterblossom followed by a Windbrisk Heights on turn three. With no Esper Charm immediately available, it did not look like a good omen of things to come for Yann Massicard. When LSV’s follow-up was a Glorious Anthem, Yann began taking extra care considering his plays. Ajani Goldmane was up next for Scott-Vargas, and it resolved successfully, but Yann used Volcanic Fallout to wipe Luis’s team and leave Ajani on just one loyalty counter.

Esper Charm finally hit the French side of the board, but after careful consideration Massicard opted to draw two cards instead of blowing up either his opponent’s Glorious Anthem or Bitterblossom. A second copy of the Charm a turn later finally blew up the American’s tribal enchantment, leaving Luis with two Faerie Rogues. Of course, when you’ve got Glorious Anthem and Ajani Goldmane, it doesn’t take many Faerie Rogues to do serious damage, and Scott-Vargas pumped his 2/2s into 3/3s, attacking Massicard to 8.

Trying to stabilize before it was too late, Yann made an end-of-turn Cryptic Command to bounce one of the Faeries, drawing a free card in the process. He then untapped and played Mulldrifter to get further ahead, but Luis was ready with Terror to kill the 2/2 Elemental in order to keep attacking. His 3/3 Faerie Rogue was pumped by Ajani to become a 4/4 Faerie Rogue and bashed Yann Massicard to 4. Tapped out from his Mulldrifter, Yann could only watch helplessly as Luis played a postcombat Head Games. Realizing he had few if any outs after the sneaky sideboard tech, Massicard opted to concede to save time for the third game of the match.

Another mulligan was in the works for Yann Massicard to kick off the third game when Luis Scott-Vargas was heckled by Antoine Ruel from the peanut gallery.

“Luis!” yelled Antoine. “Are you X-0? We want you to win!” If Massicard was affected by the good-natured betrayal from his own countrymen, he didn’t let on. 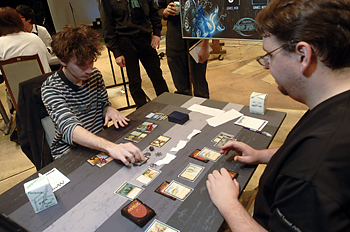 1/1 Spirits look suspiciously similar to scraps of paper.Luis Scott-Vargas’s second-turn Tidehollow Sculler revealed a hand of double Plumeveil, Esper Charm, Cryptic Command, and Cloudthresher for Yann Massicard. A powerful hand to be sure, but missing an important element: lands. Luis trapped the Charm under his 2/2, then went on the offensive the following turn as Massicard missed a land drop. That put the score at 20-18 in LSV’s favor, and things looked very bad for Yann as he missed his third land drop for a second turn, now staring down three 1/1 Spirit tokens from a Spectral Procession as well.

Seeking to put things away, Luis played a Glorious Anthem and attacked Yann to 11, losing a Spirit token to Terror in the process. The following turn Luis had Elspeth, Knight Errant to pump his Tidehollow Sculler even further, and attacked Massicard to just 1 life. That forced the French player to use a hail Mary Cryptic Command to fog for a turn, but Luis played Bitterblossom to join his Elspeth and still threaten lethal very quickly.

Yann found a Wrath of God waiting for him, still missing land drops and stuck on four but alive for another turn. Scott-Vargas regrouped with a Faerie Rogue from Bitterblossom, a Soldier from Elspeth, and three Spirits from Spectral Procession. When the top card of his library wasn’t yet another miracle, Yann nodded in defeat and extended his hand.