In this round, Israeli team Ori Horev, Boaz Havron, Yaniv Perry met the international all-stars Martin Jůza, Paulo Vitor Damo da Rosa, and Shuhei Nakamura. After starting 0-1-1 into the tournament, the latter had won a straight seven matches yesterday to clinch their berth in Day 2. However, now at 7-2-1, they were again facing possible elimination from Top 4 contention. "Shuhei's 10-0," Jůza admitted. "We're just dragging him down." 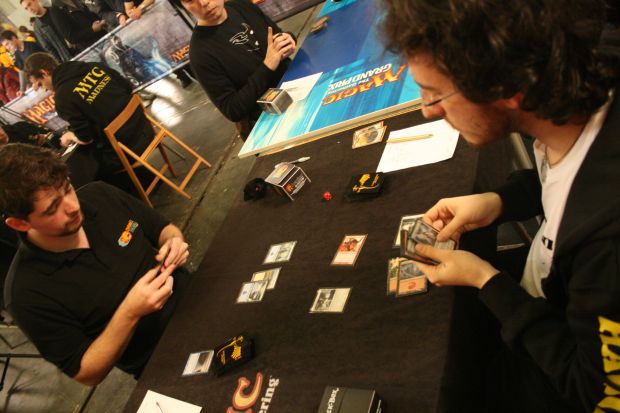 First, Damo da Rosa's Favored Hoplite and Elite Skirmisher were no match for Havron's  and Archetype of Courage. On top the Vanguard was given Nyxborn Rollicker, , and Ordeal of Heliod in exchange for three 1/1 tokens, and it was soon over.

For the second game Damo da Rosa kept five lands, Ornitharch and his own Ordeal of Heliod, just to encounter an even more aggressive opening from Havron: Firedrinker Satyr, Akroan Skyguard,Nyxborn Shieldmate. Damo da Rosa's  bought some time, but when his first creature, the Ornitharch, was met by Magma Jet and  he had fallen way to far behind and never got back into the game.

Next, Shuhei Nakamura and his black-green deck met Yaniv Perry and his blue-black.

Perry started surprisingly aggressive with Fleshmad Steeds, Blood-Toll Harpy, and Erebos's Emissary, but with the help of Sedge Scorpion, Karametra's Acolyte, Bow of Nylea, and Nessian Asp, Nakamura quickly took over the game and there was no comeback for Perry. 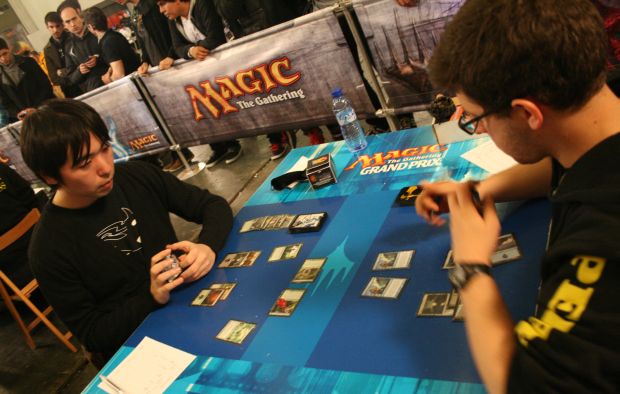 In game two then, it was Nakamura who took the role of aggressor or, more accurately, his Setessan Oathsworn did. It was targeted by

Now it all came down to the pairing of Martin Jůza with red-white versus Ori Horev with green-black.

Jůza started off with Anax and Cymede and Borderland Minotaur but, facing Swordwise Centaur, Courser of Kruphix, and Graverobber Spider, wasn't yet able to get in any damage. He cast Oreskos Sun Guide  and Flamespeaker Adept instead, and attacked with all five of creatures next turn. There were some blocks, Jůza cast  on Anax and Cymede, Horev responded with Lash of the Whip, and Jůza in turn responded with . The end result were two dead creatures and 13 damage for Horev, no losses whatsoever for Jůza. Almost needless to say that Horev did not recover. 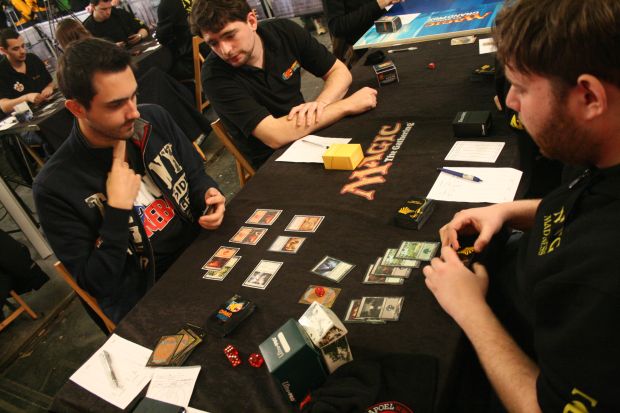 The second game was a much longer and drawn-out affair, thanks in no small part to Horev's Akroan Horse. Initially, Jůza took a lot of damage from Horev's growing army of soldier tokens, partly because his creatures kept dying to things like Lash of the Whip and Sip of Hemlock. Finally, however, he managed to stabilize with Stoneshock Giant, Flamespeaker Adept, and Borderland Minotaur, and was able to create his own, somewhat larger, tokens via Hammer of Purphoros.