Meeting in the feature match area this round were two of the tournament's last three players with perfect records of 10-0. Of course, only one of them would be able to continue his winning streak, so who would it be? Simply going by pedigree, Pro Tour champion and Hall of Famer Paulo Vitor Damo da Rosa was clearly the favorite in this match against little-known Frenchman Maxime Gilles, but what about the decks?

As it so happens, all three 10-0 players, the two here as well as Philipp Schönegger on the next table, were basically piloting the same deck. Miracles apparently was a good choice this weekend. However, Gilles's version was featuring a small red splash for one each of Pyroblast and Red Elemental Blast in the main deck, which was certain to give him some edge in the almost-mirror.

The action started early here, as Damo da Rosa's turn-one Sensei's Divining Top was met with Force of Will, then the game entered a lull where both players went "land, go" for about six turns with the occasional Brainstorm or Ponder thrown in. 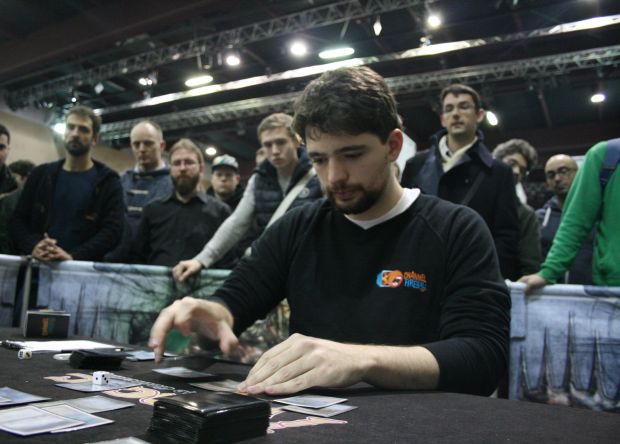 The action resumed when Gilles tried to resolve Sensei's Divining Top. Damo da Rosa had five lands but only two sources of blue mana which he tapped for Counterspell, Gilles responded with Red Elemental Blast, and succesfully resolved his Top. Damo da Rosa untapped and tried Jace, the Mind Scultor. Gilles had Snapcaster Mage to flashback Red Elemental Blast, already deciding the third exchange for himself.

The next fight, a couple of turns later, concerned Gilles's Jace, the Mind Sculptor, which he forced through Damo da Rosa's Snapcaster Mage/Counterspell combination with Force of Will. Up a Top as well as a Jace, Gilles was looking to be in a good spot. After all the trade-offs, though, Damo da Rosa was now able to resolve his own Top and Jace. Gilles, in turn, miracled Entreat the Angels on his turn for four 4/4s. The game was really picking up speed.

On his turn, Damo da Rosa cleared the way with Vendilion Clique and set up to miracle-cast Terminus during Gilles's upkeep. However, Gilles responded to the miracle trigger with his own topdecked Vendilion Clique, removing Terminus from Damo da Rosa's hand before it could be cast. Damo da Rosa had responded with Brainstorm but in the end couldn't do anything about it, and subsequently lost his planeswalker and a good chunk of life to Gilles's Angel beatdown.

On his turn, he recast Sensei's Divining Top and set up yet another Terminus. This time, it resolved, and Gilles was left with just Jace, the Mind Sculptor. That proved quite the threat though, as ist continued accumulating counters. Soon it had nine, then 11, then 13. At this point, in the nick of time, Damo da Rosa had his own miracle in Entreat the Angels.

The action started during Damo da Rosa's fourth turn, after he had missed a land drop, when Gilles cast Vendilion Clique and had it countered by Counterspell. On his turn then, Gilles went for Counterbalance which met Damo da Rosa's Pyroblast which itself met Gilles's Flusterstorm.

Counterbalance resolved and so did Gilles's Jace, the Mind Sculptor a turn later. The game was slipping away from Damo da Rosa—and not slowly but actually quite fast. He had to do something soon, and he did, pushing his own Jace, the Mind Sculptor past Gilles's Red Elemental Blast with Force of Will. On the backswing, however, Gilles, after Ponder, completed his Counterbalance/Sensei's Divining Top soft lock with the missing artifact. 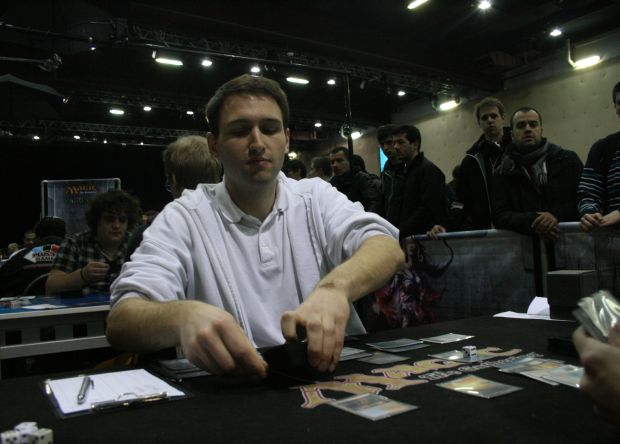 Gilles replaced the planeswalker with another, and a couple of turns later, Gilles had also drawn another Sensei's Divining Top. Damo da Rosa was out of gas and out of options, and soon offered his hand in concession.

"The red Blasts in the main deck completely changed the dynamic in the first game," Damo da Rosa explained after the match. "He basically started with a sideboarded deck." That and a few mana issues on Damo da Rosa's side clinched the match for Gilles.

Meanwhile, one table further down, Philipp Schönegger had also won his match, so Maxime Gilles would be facing another Miracles mirror match next round for the showdown between the only two 11-0 players.