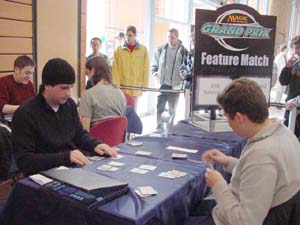 Blech triumphed recently in Grand Prix Genova. His opponent, Dirk Baberowski, also from Germany, is no stranger to success with multiple Pro Tour titles under his belt.

Baberowski threatened an affinity style start to the first game as his deck whipped out Welding Jar and Aether Spellbomb on turn 1. He unfortunately didn't have any Enforcer to take advantage of it but it did allow him to comfortably Irradiate Blech's third turn Spikeshot Goblin.

Baberowski bashed away with a Neurok Spy and Leaden Myr while Blech was struggling with only three land. An Annul on his Myr seemed harsh. Baberowski repeated the trick on a Serum Tank.

As fast as Blech could put the cards out Baberowski was sending them to the bin. A second Spikeshot Goblin fell to an Irradiate before Blech finally found a fourth land to bring out a Vulshok Berserker on defensive duties. 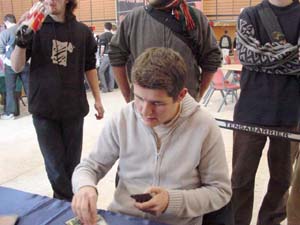 That paused Baberowski as he brought out a Lodestone Myr and gave it a Bonesplitter to play with. Blech found another land and brought out a Leadfoot Ogre. Together they brought down the Myr and the 'splitter was passed to the Spy.

Blech went down to 2, drew a card and then conceded the game.

Blech had a much better draw in the second game, dropping a Copper Myr and then a Spikeshot Goblin. Next turn the Goblin was given some shiny new Vulshok Gauntlets although Blach didn't have the mana to activate him. Baberowski didn't have immediate answers other than swinging with a Neurok Spy and summoning Yotian Soldiers.

The Spy got blasted by "Spikey" and the troublesome Gauntlets were passed to the Myr to allow him to repeat the trick for next turn. Baberowski brought out a Pewter Golem. There didn't seem much else to do and Blech would be tied up for a while flipping the Gauntlets around.

"Spikey" shot the Golem and needed a breather to recharge as Blech summoned some Tel-Jihad Chosen. Exiles followed and held the Gauntlets for a while. 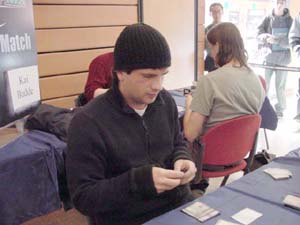 Baberowski was struggling with some land and not a lot else. Spikey shot his last creature, the Soldier, and Baberowski drew and then conceded as he wasn't coming back into this game.

Baberowski came roaring out of the blocks in the third game. A second turn Myr accelerated out a third turn Nim Shrieker. Blech wasn't hanging around either as his myr ramped him up to a Tel-Jihad Exile. He really would have rather had a Spikeshot Goblin though and the next turn was brutal as a Bonesplitter and another artifact powered up the Nim. Pewter Golem followed the next turn as the Nim took another massive bite out Blech's life total.

Blech drew no answer and the game was over almost as quickly as it started.