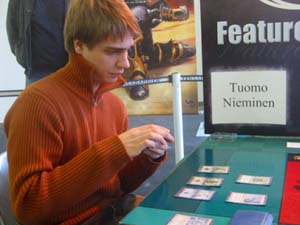 Tuomo? He was undefeated when we featured him yesterday. Well, he still is. In fact he is the only undefeated player at this point with an impressive standing of 10-0. Thirty points. His opponent is also undefeated but he already picked up a draw along the way. No big problem. They're both on the fast track to the Top 8. The winner here is almost certainly in.

Daniel won the "odds or even set number" game and got to start. He cycled Chromatic Sphere to power out Atog while Tuomo cycled Aether Spellbomb then played a second Spellbomb. While the Finnish player dropped lands, Rottger dropped creatures. He followed the Atog with Goblin War Wagon and Leonin Den-Guard.

Nieminen played Sculpting Steel to copy the War Wagon and keep things under control, but the German had no intention to stop now. He equipped his War Wagon with Fireshrieker and sent it into the Red Zone. Tuomo's Spellbomb bounced it out of the table.

The Den-Guard grabbed the Fireshrieker and brought Tuomo to thirteen. Still holding double-blue cards the Nordic player drew yet another Forest. Sensing his opportunity Rottger used Blinding Beam to sneak through five damage, to drop Nieminen to eight. Tuomo untapped his War Wagon, drew his card and finding no way to slow the incoming attack conceded.

Rottger had to send his hand back but seemed happy his second hand. It yielded a second turn Leonin Skyhunter and Skyhunter Cub while Tuomo played Tel-Jilad Chosen and a Myr. Worried, the Finnish players cycled Aether Spellbomb for some help and played Wizard Replica after missing his fourth land drop.

Daniel had no equipment to power his Cub this turn so he merely sent his Leonin Skyhunter in before playing Fireshrieker. He clearly didn't notice Tuomo had Silver Myr and Wizard Replica. Nieminen promptly sacked his creature to stop Fireshrieker from coming into play.

A second Leonin Skyhunter gave Rottger another flyer while Tuomo retaliated through the ground with Chosen and Neurok Spy before playing Tel-Jilad Archers. Daniel bought some precious time in this race with a Blinding Beam. Tuomo fell to ten and was forced to use Fabricate to get Aether Spellbomb.

That gave him some protection in case Daniel tried to equip his Cub. The German sent his crew in, dropping his opponent to four, and played a great game-finisher at this point: Spikeshot Goblin. Even if Tuomo could clog up the skies the goblin could just smash his dome.

Naturally the Finnish player stopped to rethink his plan. One game behind and in serious trouble he knew he had to be careful. Keeping only his Archers back he sent four creatures in. Rottger decided not to block. Tuomo thought about it for a while and used Battlegrowth on one of his Myrs. Rottger fell down to eight.

That meant the German couldn't send an all-out strike twice for the win, because Tuomo would kill him on the next swing. Rottger agonized for a while, played a land and stared at the last card in his hand - a Mountain - hoping to trick Tuomo. Then he passed his turn.

It was Nieminen's turn to sit back and work out the math. He sent almost everyone in, keeping only Silver Myr back. The German moved his creatures about, trying to find the est way to block. With three 2/2 creatures, there really wasn´t much he could do other than trade. Spikey shot Tel-Jilad Chosen and they both lost two creatures, leaving Daniel Rottger at three.

After mumbling under his breath for a few minutes Tuomo Nieminen figured he could risk one turn. He tapped out completely to play Mind's Eye. Daniela Rottger had the Red Zone all to himself. His opponent was completely tapped out. He sent the Leonin Skyhunter in to drop the Finnish to a mere two, and had his Spikey ready.

The Spellbomb bounced the Spikeshot Goblin, who shot the Myr away. Tuomo played Cobalt Golem and Daniel replayed his Goblin. With his opponent at three Nieminen sent the Golem in. Daniel fell to a single life point.

The game ended with one minute on the clock. 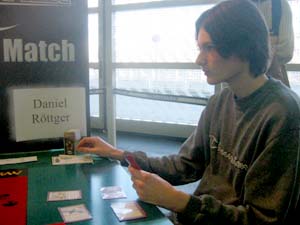 With only one minute to go, both players just shuffled their decks until time ran out. There was no Game 3, unfortunately, as I'm sure it would have been quite the battle.