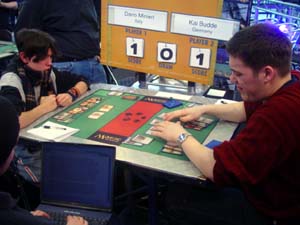 players came into this round at 8-2, and are inching closer to a seat at the Top 8 draft table.

Me- "You haven't won a Pro Tour this season yet, have you?"
Budde- "This is only the third one."

Minieri started with Pyrite Spellbomb, and a third turn Yotian Soldier. Budde played a Soldier Replica, and Minieri sacrificed the Spellbomb to draw a card, then used Electrostatic Bolt to kill the Replica. Budde played Serum Tank followed by Bonesplitter, and Yotian Soldier attacked for a point of damage. Minieri added a Nim Lasher to his side, and Budde played a fifth land and ended his turn. Minieri played an Iron Myr and attacked with his team, and Budde drew a card off the Tank. On the following turn, Minieri played Pewter Golem and attacked, and Budde used Soul Nova to deal with the Lasher. Goblin War Wagon provided a little in the way of defense, but Minieri kept the offense coming, playing Vushok Berserker and attacking with his team- the Wagon traded with the 3/2. Arrest nullified the Golem, Budde summoned Auriok Transfixer and played a Viridian Longbow. At this point, the board seemed to be close to stabilized, but Minieri was able to get through for one more attack with another Berserker. This also put enough pressure on Budde that he had to send the Transfixer in to trade with an attacking Myr.

He untapped and played Leonin Elder, then handed it the Bonesplitter. This still left enough mana open to activate and block with Stalking Stones. Minieri cast Betrayal of Flesh with entwine to kill the Elder and bring back a Berserker, which was enough to finish the game. 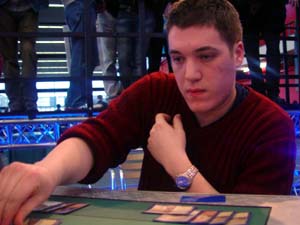 Minieri used Gold Myr to accelerate into a turn three Hematite Golem, while Budde had Soldier Replica. The Golem got through for a point of damage, and was joined by a Pewter Golem, which was promptly stopped by Arrest. Budde used his one remaining mana to play a Longbow, and once again Minieri was able to continue his assault with the help of a Berserker. Budde played a fifth land and a second Soldier Replica, leaving two mana open for activation. The Golem and Berserker attacked, and the Replica took down the Golem with an activation. Budde took his turn, and brought out Triskellion. It blocked an attacking Berserker, and a Nim Replica activation finished the job. In response, Budde shot down Minieri's Myr and dealt two damage to him, leaving the Italian with no creatures. Budde played Serum Tank soon after, and started to pull ahead. But, in response to Bottle Gones, Minieri destroyed it with Shatter. Budde summoned Leonin Elder, and Minieri played Yotian Soldier. Taj-Nar Swordsmith let Budde search up Bonesplitter, and it went right on the 2/3 creature. Minieri played Iron Myr and Nim Lasher- both died to the Longbow on Budde's next turn. With no resources left, Minieri conceded.

Minieri had a first turn Pyrite Spellbomb and second turn Talisman, then used the Spellbomb to kill Budde's Myr and play one of his own. Budde summoned Bottle Gnomes, and Minieri attacked for three with Vulshok Berserker. Bottle Gnomes attacked right back for one, and Budde played Skyhunter Patrol. The Patrol blocked the Berserker, and Irridate made it small enough to die in combat. Budde played a Serum Tank, and Minieri played a second Berserker, attacking with both. Thanks to Raise the Alarm, one died in combat, and Budde seemed like he'd be able to slow things down. He drew a card off Serum Tank, and took another hit from the Berserker. Shatter dealt with the Tank, and Minieri played Nim Replica. Budde untapped, played Stalking Stones, and ended his turn. He had enough mana to activate it and block, and sent it in front of the Berserker and the Gnomes in front of the Nim Replica- everyone died. Minieri played Hematite Golem, and Budde simply played Chromatic Sphere and said go. The Golem attacked and was pumped twice, and Budde had the Soul Nova to handle it. Minieri played the only card left in his hand, a Nim Lasher, and seemed to be in trouble. 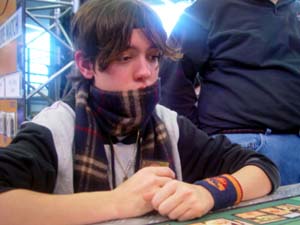 Budde brought out Soldier Replica, and took three damage from the Nim. The Replica attacked, and Budde played a second. This one traded with the Nim, and the board was now a Myr against a Soldier Replica. At this point, Budde pulled far ahead, playing a Transfixer and using a Swordsmith to search up the Longbow. It went on the Replica, and Minieri responded by killing it with Electrostatic Bolt. He untapped and played Goblin War Wagon, which was less than impressive due to the Transfixer. Budde played his own Wagon, and used Blinding Beam to force through an attack. Oddly enough, he forgot to pay two to untap his Goblin War Wagon, so you forum dwellers can release the dogs and create your own "Kai makes a mistake!" posts and photoshoppery.