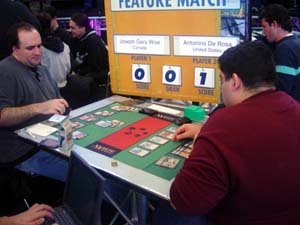 De Rosa and Gary Wise are both part of the gigantic team that is CMU-TOGIT. Antonino recently won Grand Prix Kansas City, while Gary most recently Top 4'd Pro Tour Boston as part of Zabuton Nemonaut.

The subject matter of the conversation during the shuffling and die roll wasn't suitable for this family website, so we'll pretend that Gary and Antonino talked about the weather. Meanwhile, Antonino won the die roll.

Gary had the first play with a Leonin Elder, and rose to twenty-one when Antonino had a turn two Silver Myr. Gary played and equipped a Bonesplitter, then swung and the creatures traded. He can't find a third land.

The next few turns involved Alpha Myr getting ambushed by Raise the Alarm and Antonino playing out Clockwork Condor. Gary used one of his two mana to equip the Soldier and attack for three, and the other to play a new Leonin Elder.

Antonino refueled with a four mana Thoughtcast and added a Tree of Tales. Gary played out a Banshee's Blade, attacked with the Soldier, then pumped with an instant-speed Tooth of Chiss-Goria, making the life totals twenty-five to thirteen. Antonio passed it back with six lands in play, saying, "This is fun, my Condor doesn't attack, doesn't block. Just sits here."

Antonino resolved Thirst for Knowledge and pitched two Islands. Finally the Condor was ready to attack and Gary fell to twenty-three. Antonino added Wizard Replica and reminded Gary to gain a life, saying, "There aren't many people I would do that for."

The Soldier and Bonesplitter entered the red zone only to die a horrible death to Krark-Clan Grunt as it ate the Clockwork Condor. Gary added a Skyhunter Patrol. Antonino summoned Vedalken Archmage, followed by Aether Spellbomb and an attack for two. Skyhunter Patrol picked up a Bonesplitter but was returned by the Spellbomb before he could hit for damage. Instead of replaying it, Gary summoned Spikeshot Goblin.

Antonino drew a card from Iron Myr and another from Cobalt Golem. He attacked for three to bring Gary, who kept forgetting to gain life from his Elder, back down to twenty-one. Pyrite Spellbomb netted another card. Strangely he chose to let Gary untap and passed the turn with a Mountain up.

Gary was now able to attempt to equip his Goblin with Bonesplitter. Antonino killed it in response, but in response to that Gary pumped with Tooth of Chiss-Goria and gunned down the Archmage. Unfazed, Antonino cast the "Peek on legs", Wanderguard Sentry, and revealed the following in Gary's hand: two Skyhnter Patrols, Vulshok Berserker, and Clockwork Condor. He then added Crystal Shard and attacked for five.

The rest of the game was fairly academic. With Crystal Shard and a dominant board position, Antonino finished Gary off, adding, "You know how close I was to conceding this game?" 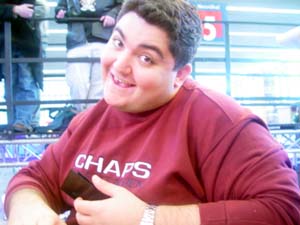 When asked why he allowed Gary to untap with his Spikeshot Goblin, Antonino said that, with Crystal Shard in hand, he felt it was worthwhile to lure Gary into wasting a turn on killing his Archmage.

As they shuffled up, more Dario Minieri stories were exchanged. Hilarity ensued, but unfortunately I can't share.

The first play of the game was Gary's Raise the Alarm at the end of Antonino's third turn. He untapped, played Vulshok Berserker and bashed for five. Antonino cast Thirst for Knowledge to search for answers.

"I hate Thirst for Knowledge, it gives me way too many choices. Where's Wild Mongrel when you need it?"

He pitched Cobalt Golem, then untapped and played Lodestone Myr. Gary had a fifth land, put a Leonin Scimitar on a Soldier, then attacked with that and Berserker. Tooth of Chiss-Goria allowed the Soldier to trade with the Lodestone Myr. Antonino fell to twelve.

He untapped, with a grip full of spells, and placed Wizard Replica and Aether Spellbomb on the table. Gary attacked for six, holding two Skyhunter Patrols but with only one Plains. Antonino added a Pyrite Spellbomb, then played Thoughtcast for one. Still no lands. Another Thoughtcast. Great Furnace, done.

The alarm was raised again, and three soldiers (one with a Scimitar) and Vulshok Berserker charged in. Antonino killed the Berserker with his Pyrite Spellbomb, blocked and fell to two. He untapped and lapsed into thought, saying, "I'm gonna take two or three minutes with this turn. This affinity stuff is way too hard for my stupid brain."

One mana enabled the third Thoughtcast of the game. Finally he simply played Island and entered his discard step, pitching a land.

For some reason, a minute later Gary asked Antonino how many cards he had.

He then attacked with both Soldiers and, before blockers, tapped the Wizard Replica and his own Soldier with Blinding Beam. Antonino bounced the Soldier with his Spellbomb and then Irradiated the other after it was targeted with Tooth.

Antonino had reinforcements in the form of double Myr Enforcer, but Gary had drawn his second plains. One Skyhunter Patrol came down, and then another. After confirming that he was at two, Antonino packed it in.

In a nod to Gary's Raise the Alarms, Antonino took out Alpha Myr and replaced it with Copper Myr. Meanwhile, Gary said hello to all the Dutch girls out there, while Antonino just wanted to say hello to his girlfriend. Aww.

Leonin Elder came down on turn one. Gary was pumped about his hand and promised to remember all the lifegain this time. Antonino started it off with Tree of Tales and Leaden Myr. Gary to twenty-two.

Gary played a second Elder and a Bonesplitter, rising to twenty-four.

Antonino played Copper Myr, and…Gary forgot. Shrugging it off, he attacked with both Elders and one traded with the Copper Myr. Skyhunter Cub came down. Antonino could only summon a Lodestone Myr, taking Gary up to twenty-five. He then Annuled a Banshee's Blade but took five from the equipped Skyhunter Cub.

He tapped one for AEther Spellbomb. "Okay," said Gary as he forgot to gain the life. He did, however, remember to gain one from the next artifact: Clockwork Condor. On the next attack, it stepped in front of the 5/3 Skyhunter Cub but Gary had the Roar of the Kha. Antonino fell to twelve.

Lodestone Myr attacked for five, taking Gary to seventeen. On end step, the alarm got raised. Gary attacked with the team and Antonino fell to four. Myr Enforcer prompted another "okay" from Gary as he forgot yet again. By this point, even the spectators were laughing each time it happened. Gary offered some excuses about never having played with the card, and Magic Online making him lazy. 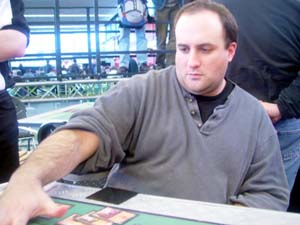 Gary flipped his card over. Indeed he had.

After hearing about the match, Eugene proposed errata for Leonin Elder:

"When an artifact comes into play, if your name is Gary Wise, flip a coin. If it comes up Heads, gain one life."

1 Thirst for Knowledge 1 Talisman of Progress