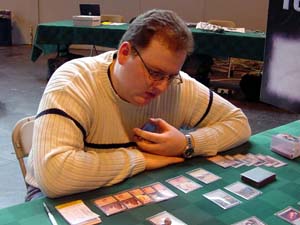 Kraft from Germany has a couple of Grand Prix top 8's to his credit and is currently the only player left in the tournament with a perfect record. His opponent is Jose Barbero, formally from Argentina, but a resident of Paris and frequent GP visitor for the past year or so. Barbero's credits include winning GP Amsterdam with team Rankko-Bongo-unpronounceable-something-or-other and a quarter-final appearance at Pro Tour Yokohama.

Barbero dropped a couple of cheap early artifacts in Welding Jar and Pyrite Spellbomb. He didn't really get to explode though, taking his time to Fabricate a Loxodon Warhammer from his deck.

Kraft's red-white deck meanwhile got some early beats in with a Pteron Ghost and Krark-Clan Stoker. His Skyhunter Cub was blown up by a Spellbomb and then Barbero clawed back some of the life lost by zipping in with a hammer-armed Slith Firewalker.

Kraft fried that threat with a Fireball before it got out of hand and brought in some Vulshok kit: Gauntlets followed by some Battlegear. Barbero made a tricky Quicksliver Elemental. Rather than give it the hammer he gave it a Morningstar instead and then boosted it with Scale of Chiss-Goria when Kraft tried to block with a Gauntlet equipped Stoker.

Kraft was on the back foot. That back foot happened to be in the form of a 8/6 Pteron Ghost so he wasn't exactly moving anywhere fast. Sun Droplet came out to stem some of the bleeding. The Quicksilver Elemental picked up the Hammer and came squidging in. This time Kraft had the trick and a Razor Barrier ensured his guy stayed alive.

Barbero tried to bust through again with a Hammer-equipped Haematite Golem. This time the Pteron Ghost took it for the team while a Welding Jar kept the Golem alive. Kraft brought out a replacement in Ogre Leadfoot only for Barbero to zap it with Barbed Lightning.

From there Kraft failed to draw any more creatures and the elephant-on-a-stick claimed another victim.

After writing up the first game I expected to look up and see both players had laid a couple of lands and maybe their first creature. In a format with affinity that's probably an unwise assumption. Despite skipping a land drop Barbero already had Arcbound Worker, Frogmite, Vulshok Morningstar, Viridian Longbow and Welding Jar.

Kraft had to content himself with the slower start of a Skyhunter Cub followed by Battlegear. The Cub got itself some nice new clobber and smashed through the air as a newly graduated 6/6 flier.

Barbero's answer was to bring out an elephant-with-a-stick. Barbero couldn't really equip it and attack as Kraft made a Glaivemaster and 5/5 first-striking monsters are a little difficult to get past. The Worker picked up the Bow instead.

The Glaivemaster charged in and Barbero considered his options, trying to work out whether Kraft had drawn the Fireball. He risked it and let the Glaivemaster knock him to 3 life.

Realising the game was looking bad Barbero gave the Frogmite a Hammer to go with its Morningstar and charged it blindly in on a suicide mission to gain back some life. Kraft had a Razor Barrier though, and it was onto a decider.

Barbero's deck started spitting out artifacts early in Game 3 as well. He made a Spellbomb, then a Morningstar, but then had to pop the Spellbomb. Kraft made a Morningstar of his own, but he actually had a creature to put it on: Pteron Ghost.

Barbero's Arcbound Worker got fried by an Electrostatic bolt, but the Quicksilver Elemental that followed looked a little more durable. Kraft didn't care, he just added a Skyhunter Patrol to his airforce.

Barbero brought out a Neurok Prodigy as an answer only for Kraft to fly in anyway. Barbero didn't bite and took the damage. A Krark-Clan Stoker was a less than stellar addition to Kraft's board.

Barbero thought for a while before casting a Slith Firewalker and giving it a Viridian Longbow. He kept his team back and as Kraft thought in his turn it seemed like the game might be entering the stall phase.

Kraft took a long time to think before attacking with the Ghost and Skyhunter Patrol. Barbero immediately blocked the ghost with the Prodigy, happy to trade.

After another long though Barbero gave the Firewalker the Morningstar and smashed in with that and the Elemental. Kraft took the damage. Barbero brought out a Vedalken Engineer and gave that the Morningstar. 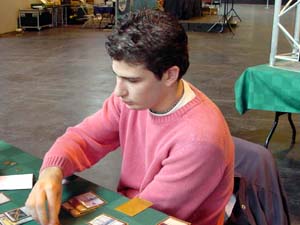 He needed fliers though. Kraft attacked with the Patrol and took Barbero down to two. Time was called just after the German passed the turn. The extra turns weren't needed as Barbero drew no answer to the 4/3 first-striking flier.

The win puts Rene Kraft to 11 - 0 and now almost certainly into the top 8.