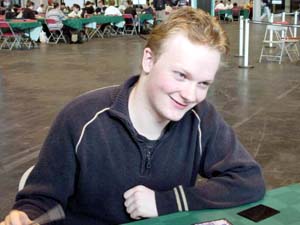 Mattias won the die roll and elected to play first. They players wished each other luck as they drew their hands, and it seemed to pay off as both kept.

Each led with a Swamp on the first turn. Mattias had a Mountain and a Leaden Myr, Frank an Island and an Echoing Decay. Mattias played out a Goblin Replica on his third turn, while Frank had no play other than an Island.

Mattias attacked and slipped out a cheeky little Arcbound Stinger. Frank made no fourth land but his deck turned up an Alpha Myr for him. Mattias tapped out for a Pewter Golem, and Frank paused to consider the situation.

Frank eventually decided he was best off attacking with the Myr, made his fourth land and surreptitiously slipped a Dross Scorpion into play. "Dross." escaped deadpan from his lips. "What??" exclaimed Mattias, shocked at the sight of the lesser-played Scorpion.

Mattias swung with his Pewter Golem and Arcbound Stinger, which went uncontested through the red zone, dropping Frank to 12. He played out land number six and made a Rustmouth Ogre. The outlook for a Karsten victory was beginning to look very bleak indeed.

Frank made himself more Dross, a Golem this time, and passed back the turn. Mattias untapped and mused over the board for a while. Frank flashed me his hand - Consume Spirit, Essence Drain, Loxodon Warhammer, a Myr Enforcer and another decent creature. If he could live long enough that could well be enough to swing things his way, but right now just staying alive seemed quite the feat! Mattias sent in his Pewter Golem and Stinger, and Frank dropped from 12 to 7. Mattias tapped out for a Mirror Golem!

"Annul?" asked Mattias. Frank shook his head sadly, and Mattias removed his Iron Myr from his graveyard, giving him a monster pro-creature, pro-artifact beatstick. The clock on the board now had Frank dead in two turns, and unless he had a decent play for his next turn, he'd have to lose all his men just to stay alive that long!

Fortunately for Frank he found his fifth land, Swamp number three, and Essence Drained Mattias' Goblin Replica, taking him back up to 10. Still with no viable attack, he sent the turn over to Mattias.

Mattias thought briefly before sending in his Pewter Golem, Arcbound Stinger, and Mirror Golem. Frank's Alpha Myr chumped the Pewter Golem, which regenerated, and Frank went down to six.

Frank found Swamp number four, his sixth land overall, and played and equipped his Loxodon Warhammer to his Dross Golem. He swung in for six, evening the life scores to 12 apiece.

Mattias' board position was still excellent, and he sent in his team bar the Mirror Golem. Frank chumped the Rustmouth Ogre with his Dross Scorpion, and Mattias had no more plays. Frank untapped, drew, and pondered, shuffling the cards in his hand. He eventually played out a 5 mana Myr Enforcer and passed the turn.

Mattias checks that the Warhammer lifegain doesn't take place after damage resolves, meaning that Frank must block with at least one large creature to stay alive. Mattias attacked with everything, Frank's Myr Enforcer traded with the Rustmouth Ogre and his Dross Golem engaged the Pewter Golem. Mattias regenerated the Pewter Golem, played a Hematite Golem and ended his turn. Frank played a Chattering Rats, equipped the Warhammer to it, and passed the turn. The life scores stood at Mattias 12, Frank 9.

Mattias sent in his Pewter Golem, Arcbound Stinger and Mirror Golem. Frank left them all unblocked and took 8 down to 1.

Frank swung with his Warhammer-wielding Rat, but when Mattias didn't block, he just scooped up his cards.

As the players shuffled they realized but twenty minutes remained on the clock. Both players had taken Game 1 at a rather slow pace, and now they were a rather short of time.

Frank elected to draw first, and Mattias led with a turn two Alpha Myr. Frank matched it with one of his own, and they traded. Mattias made a turn three Krark-Clan Grunt and turn four Drill-Skimmer. Frank's next play was a turn four Moriok Scavenger returning his Myr. Mattias attacked with the Skimmer and made a Hematite Golem. Frank took one and made himself a Clockwork Vorrac.

Mattias continued to chip away at Frank's life total with his skimmer, and dropped a Dross Golem and Goblin Replica on his next turn. Frank's Echoing Decay removed Mattias' Goblin Replica while Mattias was still tapped out, and Alpha Myr rejoined Frank's troops. Mattias nipped in for another two with the Skimmer and passed the turn. 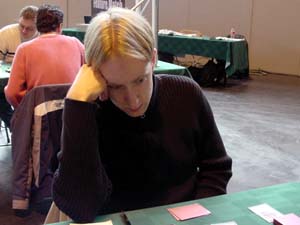 The player's pace had quickened considerably up to this point due to the time constraint, but again slowed a now as each gave some serious consideration to each of their turns, reflecting both player's slow natural paces. Frank had no plays. Mattias played out a Spikeshot Goblin and swung with the Skimmer, taking Frank to 10. Frank thought for a while, and unhappily played a Barter in Blood, leaving him with naught but a 6/6 Vorrac, which died to Echoing Ruin. Mattas' team was still three-strong and took Frank down to four. Frank's next draw yielded nothing and he conceded - Mattias' hand still contained Mirror Golem, and Betrayal of Flesh.