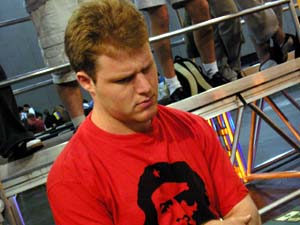 it or not, an American has not made the finals of an individual Limited Pro Tour since Alan Comer did it in Barcelona during the 2000-2001 season. American Magic seems to be losing ground to Europe and Japan with every passing event, but Ben Rubin and Antonino De Rosa are two players still holding up the banner. They're both in position to play tomorrow, but a win here is going to be very important.

De Rosa started with a Bonesplitter, and Rubin had Tel-Jilad Chosen. It came in for two, and was joined by Wizard Replica. De Rosa played his first creature of the game in Hematite Golem, which Rubin's team was able to get past for another three damage. Glissa Sunseeker provided even more of an advantage, and De Rosa could only play Vulshok Morningstar, and put it on his Golem along with the Bonesplitter. Glissa killed the Golem and Rubin played Tangle Golem.

Worth Wollpert- "That card is ridiculous."

De Rosa had a first turn Bonesplitter, and Rubin played Viridian Acolyte. Rubin summoned Copper Myr, and De Rosa brought out a Skyhunter Cub to go along with his equipment. Rubin put a mana through the Acolyte to play Pteron Ghost since he lacked a plains, and also played Tel-Jilad Chosen. De Rosa gave the Cub the Bonesplitter, attacked through the air, and played Soldier Replica. Rubin attacked with all his creatures, and the Replica blocked the Acolyte.

De Rosa- "I'm not taking another damage from that thing, unless you Predator's Strike it."
Indeed, that was the case, and the Replica headed to the graveyard. De Rosa played a second Replica, but this time he had two mana available for an activation if need be.

Rubin- I'm in a bit of a spot here."
De Rosa- "Where's Glissa this time Mr. Rubin? Aww, you don't have it! How unfortunate!"

Pteron Ghost came through for a point of damage, and Fireball killed the Cub before Rubin played a second Acolyte. De Rosa tapped six to bring out Mindslaver, which didn't make Rubin very happy.

The Chosen and Ghost dealt three, and Rubin had to tap the full six for Razor Golem. De Rosa activated the Mindslaver, put the Bonesplitter on his Replica, and ended his turn. On end step, Rubin sacrificed his Pteron Ghost so that De Rosa couldn't use it. Rubin had no hand except for the card he was about to draw, which was Roar of the Kha. An Acolyte was forced to run into the Soldier, Rubin lost his Roar, and that was the extent of the damage done. Rubin was in control of his next turn, and attacked with everyone. Electrostatic Bolt killed Razor Golem, and the Replica blocked and killed the Acolyte. At this point, Rubin only had the Chosen and a Myr, but De Rosa had no available answer for the pro-artifact creature. The Replica attacked, and had to be sacrificed to kill the Myr during Rubin's attack. Krark-Clan Stoker blocked the Chosen on the following attack, and De Rosa's Myr traded with Rubin's third Acolyte

De Rosa- "This is so embarrassing. All my friends are going to be laughing at me. 'You lost to a deck with three Viridian Acolytes!?'"

The game was now at a point where both players were looking for threats off the top, and De Rosa found the perfect one in Hematite Golem. Rubin had no blocker, and the game ended once it attacked.

Rubin had a first turn Acolyte, and when it attacked De Rosa cast Raise the Alarm to block and kill it. Rubin summoned Troll Ascetic, and De Rosa brought out Skyhunter Cub. The Ascetic got through for three damage, and Rubin played Wizard Replica. The Cub attacked for four thanks to Bonesplitter, and Rubin swung back for four. He added Tangle Golem to his side, and the game now went into race mode. The Cub dealt four more, and Hematite Golem came out to provide a blocker, at least for the Ascetic. A soldier token chump blocked the Tangle Golem, and Arrest stopped the Cub. De Rosa now had to commit to defense and trying to stay alive, putting the Bonesplitter on the Hematite Golem and keeping it untapped. This was enough for Rubin to attack with just his Wizard Replica, and he played Vulshok Gauntlets along with Goblin War Wagon. De Rosa played Arcbound Hybrid, and kept it back on defense as well. After some thought, Rubin put the Gauntlets on his Replica, and attacked for five. He then put them on the Wagon, and ended his turn.

De Rosa played a second Hematite Golem, and it became apparent that if Ben was going to win, it was probably going to have to be off his Wizard Replica and the Gauntlets. Awe Strike set back the Replica clock to buy De Rosa some time, and he played Mindslaver. Rubin sent the Replica and Wagon with the Gauntlets in for an attack. 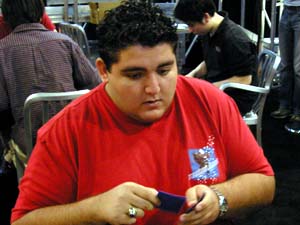 De Rosa- "If you had Predator's Strike, I think you would have attacked with everything."

He blocked the Wagon with the Hybrid carrying the Bonesplitter, declaring "Predator's Strike and you win." He didn't have it, but he did use Altar's Light to deal with the Mindslaver before it could be activated, which would have likely been game over. De Rosa played a Gauntlets of his own, and put it on the Hematite Golem that received the Hybrid's counters. The Replica took the Gauntlets and dealt five to bring De Rosa down to four. An answer didn't come off the top, and Rubin took the game on the next attack.