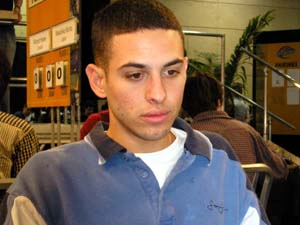 Ben Stark and the Netherlands' Frank Karsten are both looking good at 8-2. Stark made the Top 8 of the most recent Pro Tout (Kobe) with an affinity deck, so it is fitting that he sits down with a draft version of the same deck. His opponent, Frank Karsten, is one of the best Dutch players and has had great success in the team format.

"Have a die?" asked Stark as they shuffled up. Karsten said that he did, and Stark commented that Karsten was "the first pro ever to bring a die. Usually little kids have them…"

Dutch loudmouth Jeroen Remie shouted from the balcony, "He is a little kid!" Remie then pointed out that Karsten was the "last hopes and dreams of the Dutch" in this event, as all his other countrymen have worse records.

Stark was in good spirits as the other two members of his upcoming Pro tour team--Antonino DeRosa and Richard Hoaen--were also playing in the Feature area.

Stark busted out of the gates with a Bonesplittered Arcbound Worker and swung for three. It would have gotten really ugly when he added Mask of Memory on the next turn, but Karsten had a Tel-Jilad Chosen to hold it off. Stark drew a Terror to kill the Chosen a turn later, but Kasrsten had a Copper Myr to trade with the Worker.

Larger creatures came out at that point--Duskworker and Fangren Hunter for Karsten, and a Quicksilver Behemoth for Stark. Karsten then got his think on, much to Stark's chagrin ("He was fast until this turn…"), but then had a grand turn consisting of destroying the Mask with Viridian Shaman, attacking with the Duskworker for 2, and playing and equipping a Leonin Bola on the Hunter.

Stark tried to stabilize, but the Bola made it very difficult. Karsten was putting out creatures faster than Stark was, and an Icy Manipulator sealed the deal for the Dutchman. 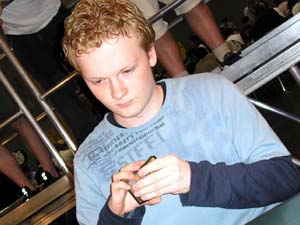 Stark had been putting out equipment again--Longbow and Mask--and got back his Gnomes with a Moriok Scavenger. But Karsten had the beats going again. The Longbow was hit with a Monkey, and Icy Manipulator came into play again. Karsten kept the pressure up, and when it looked as if Stark would stabilize at 1 life (with Bottle Gnomes in play), Karsten flashed him Pulse of the Forge and Stark scooped up his cards amidst the cheers of the onlooking Dutch contingent.

Stark was seething as he collected his cards, explaining that he "never thought I'd get a loss with this deck." The deck was indeed powerful, with lots of good equipment and affinity cards, including Broodstar. He can't let this loss get him down if he wants to make a run at his second consecutive Top 8.

1 Predator's Strike 1 Pulse of the Forge