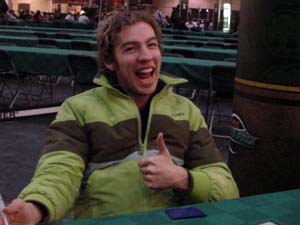 Ruud Warmenhoven doesn't let lack of sleep stop him from having a great time!

players probably needed to win the rest of their matches to have a shot at the top 8.

Julien was playing an interesting aura deck. Among his auras were two Moldervine Cloak, and he had multiple ways of finding them.

Julien drew both Cloaks, but no creatures in his opening hand. He decided to keep, however, Ruud got a Cloak of his own into play before Julien drew a creature. We Julien finally did, he dumped both Cloaks on it, and attacked for eight. Ruud showed Boros Fury-Shield, and Julien couldn't win the race. 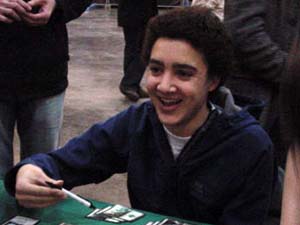 In Game 2, Julien revealed his secret weapon: Three Dreams. He found a Cloak, Faith's Fetters and Flickerform. A judge was called to clear up the interaction between Flickerform and Bramble Elemental. After checking the oracle, it was ruled that more tokens will be generated when the Elemental and the aura return to play. Flickerform on the Bramble Elemental gave the opportunity to make quite a lot of tokens, but it didn't even matter, as a 7/7 that could be phased out was more than enough.

Julien took a mulligan in the last game, and Ruud wished him bad luck with the mana. His wish came through, and Transluminant and Shambling Shell ended the game quickly.

1 Birds of Paradise 1 Votary of the Conclave