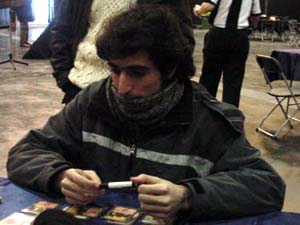 2004 Player of the Year, Gabriel Nassif

the second round on this Sunday morning, both Gabriel and Bernardo have 8-2 scores coming into this match. Before play gets underway Bernardo talks about the good cards in Nassif's deck. Apparently, Gabriel has double Lightning Helix, double Devouring Light and double Legionnaire.

Bernardo has a great start though. It's turn one Elves of Deep Shadow, turn 2 Farseek, turn 3 Three Dreams fetching Faith's Fetters, Moldervine Cloak and Clinging Darkness. What makes it even better is the fact that he is also holding Strands of Undeath, which should be enough to gain control of this game. In the meantime Gab's Viashino Fangtail gets Brainspoiled, while a Nightguard Patrol deals some points of damage. Finally the Strands gets played, netting Mindmoil and Firmemane Angel. Even though Gabriel is up to 32 life points due to Firemane Angel and two Helixes, Bernardo is never in danger of actually losing this game. A few turns later a Drooling Groodion comes down on Cabral's side, along with Bramble Elemental and Scion of the Wild. This team has no problem in dealing 32 damage to Gabriel, who drew a lot of blanks after his hand got discarded. 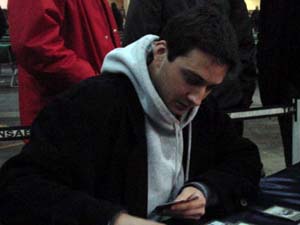 Gabriel again misses out on an aggressive start, but he manages to deal with a Civic Wayfinder with Moldervine Cloak in Devouring Light. Lightning Helix kills Stinkweed Imp, and his Viashino Fangtail and Wojek Embermage team make sure Bernardo is never able to enchant Moldervine Cloak to one of his creatures. Eventually Flash Conscription kills two of Bernardo's guys, who will try his luck in Game 3.

After two games in which both players have had one good draw and one bad draw, Game 3 is often anticlimactic. Both Cabral and Nassif easily reach 10 and 9 mana respectively, which is not something they were looking for. Again, Flash Conscription kills Bernardo's best creature, while Nassif is dealing just two damage a turn with Nightguard Patrol. Eventually Bernardo is down to seven, when he plays Drooling Groodion with one other creature on his side and four mana up. Gabriel untaps and casts Master Warcraft, using it as a Falter, dealing four damage to Bernardo, who kills the Patrol before damage. Four damage is just what Gab was looking for, as Lightning Helix seals the deal.