ChannelFireball's soft-spoken David Ochoa presents a figure like a physicist mulling over the knottier problems of special relativity. That focus has served him well so far this season, leading him to a pair of Grand Prix victories, and now a strong performance here at Pro Tour Avacyn Restored. On the horizon, he can see what would be his first Pro Tour Top 8.

His opponent this round is Michael Hetrick, who won his chance to compete this weekend in the guise of his alter-ego, _ShipItHolla, Magic Online superstar. Hetrick is on Team Panik, whose Block Constructed deck has been making waves. 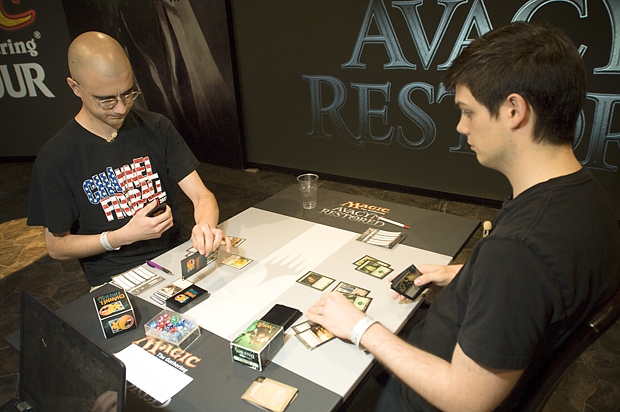 While David Ochoa is hoping to add a Pro Tour Top 8 to his resume, Magic Online gamer Michael Hetrick (AKA _ShipItHolla) doesn't intend to make the ChannelFireball member's goal easy to achieve.

Ochoa won the die roll and had to mulligan for his efforts. Hetrick stayed on seven. He was first on the board with a Crypt Creeper, but Ochoa stopped it in its tracks with a Galvanic Alchemist. Hetrick played a third swamp and passed. Ochoa hit for one and played Farbog Explorer.

Hetrick drew his card and thought for a moment before attacking with his Creeper. Ochoa gave an object lesson in the art of the snap-blocking. As soon as Hetrick's hand was off the Creeper, Ochoa announced "block" without moving an inch. It happened so fast that Hetrick needed to confirm it was happening. With a shrug he put the Creeper in the bin, and then played a Swamp and Barter in Blood. 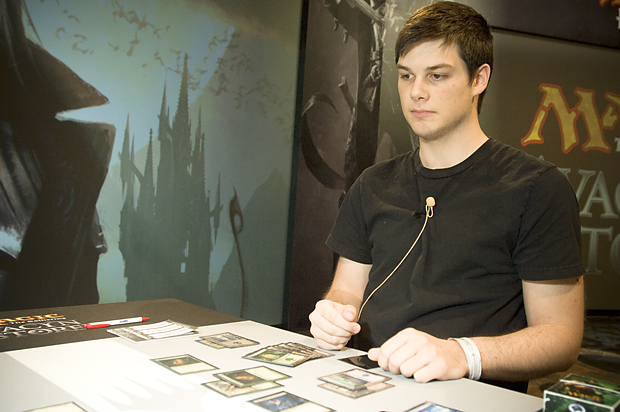 Hetrick's deck has plenty of removal to keep his opponent's forces at bay.

Ochoa still had no fourth land and passed. Hetrick summoned Evernight Shade. Then land number four came for Ochoa, and he was off to the races. Down came Seraph of Dawn, joined in short order by a twin. Hetrick had found a forest and cast Abundant Growth and Undead Executioner, but with the Angels flying overhead, his pressure was negated. Ochoa summoned Midvast Protector and Wingcrafter, soulbonding them.

Hetrick tried to chip away at Ochoa's forces. Ghoulflesh took care of Wingcrafter, and then he cast Grave Exchange. Surprisingly, Ochoa chose to sacrifice one of his Seraphs. Hetrick swung in with his Executioner and Ochoa was happy to trade. He then untapped and demonstrated the merits of having a Seraph in the graveyard with Defy Death. If there was any consolation for Hetrick, it was that at least defeat came quickly.

Now it was Hetrick's turn to start with six. He led with Abundant Growth, then Swamp and Ghoulflesh on Ochoa's Nephalia Smuggler. Unfortunately, he passed his third turn without a third land. Ochoa played Latch Seeker, but Hetrick had Death Wind, but still no land to go with it.

Ochoa drew and passed the turn, revealing that he, too, was short on mana. Hetrick missed again but played Nightshade Peddler. Ochoa missed and discarded Archangel. Still nothing came from Hetrick, who got in for an anemic one. Finally Ochoa's deck broke the stalemate, serving up a fourth land for Midvast Protector. Perhaps in sympathy, Hetrick's gave him a Swamp, but still he played nothing.

Ochoa rumbled in for two and played Holy Justiciar. Hetrick discarded Maalfeld Twins. Ochoa tentatively swung for two, then played Spectral Gateguards after combat, pairing them with the Protector. Hetrick drew and discarded Demonlord of Ashmouth. Ochoa hit for four this time, keeping his Justiciar back and leaving six mana open, only one of which was white.

Finally Hetrick's deck saw fit to serve him up a fourth land, and Hetrick tapped out for Barter in Blood. Ochoa reluctantly sent Midvast Protector and Spectral Guardians to the graveyard. He untapped, hit for 2, and paired his Justiciar with Wingcrafter. Another land for Hetrick and he summoned Geist Trappers. While they were unpaired Ochoa went overhead for a quick three points, then showed he had drawn his second plains, enabling Defy Death on Archangel.

Hetrick played Evernight Shade with a frown, leaving two mana open. Ochoa thought for a moment on his turn before tapping down the Shade and swinging with Archangel. Hetrick blocked, then went for Peel from Reality on his Shade and the Archangel. Ochoa pulled Restoration Angel out of his hand and briefly flashed it by saying, "I'll respond by..." and then after realizing that he couldn't flicker his Archangel, "doing nothing," with a sheepish smile on his face. Hetrick laughed and nodded. 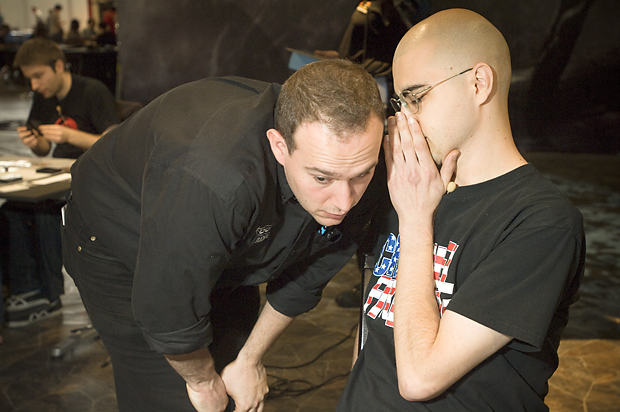 My Archangel is an Angel? Well, this is awkward.

Hetrick played Borderland Ranger and paired it with his Geist Trappers. Ochoa flashed in his Restoration Angel as an extra attacker. He untapped, then Peeled his Wingcrafter and the Geist Trappers. He replayed the Wingcrafter then flew over for five with Justiciar and Restoration Angel. His last mana he spent on Seraph of Dawn, the last nail in the coffin. Hetrick looked at his top card and scooped.

After the match Ochoa gave a wry smile. "That was... moderately embarrassing." Hetrick agreed, and they wished each other good luck with the rest of the tournament.