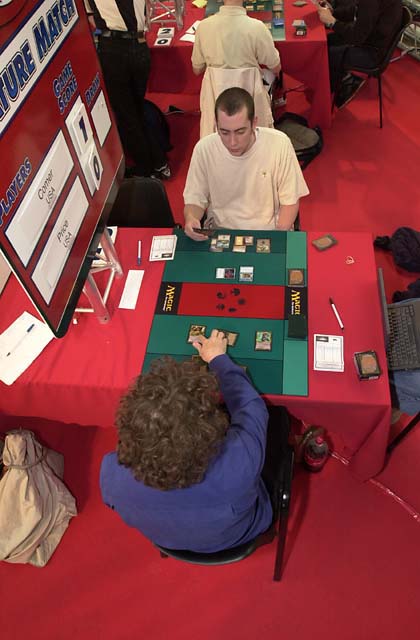 Alan Comer explained his draft strategy to me before his Feature Match against David Price began: "When I sit down and recognize the people who are feeding me, I know I'm going to draft green!" After posting a 2-2 record at his first table, Comer has rattled off 6 wins in a row with two different green decks and clawed his way up to 15th in the standings. Almost all the PT regulars prefer to draft some combination of black, blue, and red cards so the few players willing to draft green have been doing quite well this weekend. Both OMS brothers have started to force green and Kai Budde is in first place partially on the strength of a 4-0 with a green-white deck.

Comer and Price are each veterans on Tour who haven't put up great results in the last year and each needed a money finish in Barcelona in order to stay on the "gravy train." With 8-2 and 7-3 records respectively, though, they were each starting to think bigger thoughts. Price would love to return to the Top 8 for the first time since his win at PT LA '98 while Comer is in contention to put up his 5th Top 8. Only Jon Finkel has more than that. 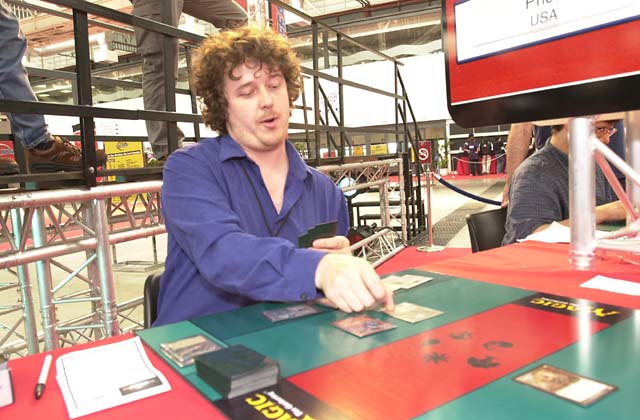 Price started well in game 1 with a turn 3 Silver Drake and then an Aura Blast on Comer's Fires of Yavimaya before Comer got to use it. However, Comer came back nicely with Canopy Surge for 4 that removed both the Drake and a Dream Thrush. Comer followed up with Kavu Climber, but Price swung back in the card advantage battle by playing Probe with the kicker. Price's hand was so good that he discarded Sawtooth Loon to the Probe. However, the one spell Comer was able to keep was a good one: Nemata, Grove Guardian. Nemata's 4/5 body seemed bigger than Price could effectively deal with, but the Saprolings made his task impossible.

Price mulliganed before game 1, but his 6-card hand was solid. He played out Stormscape Apprentice and Shoreline Raider while Comer dropped Yavimaya Barbarian, Quirion Elves (naming black), and Horned Kavu. Price kept tapping Comer's Quirion Elves during Comer's upkeep because Comer was a bit pinched for land. Once he built up to six lands, Price dropped Zanam Djinn. It was only 3/4, though, and Comer killed it with Canopy Surge. Comer then killed the tapper with a Simoon and cleared Price's hand with a Thunderscape Battlemage. Price drew a Faerie Squadron, but Comer had Magma Burst ready and suddenly all Price's side of the table consisted of seven lands, no other cards in play, and no cards in hand. When the game ended, Comer had three creatures in play and Breath of Darigaaz still in his hand. 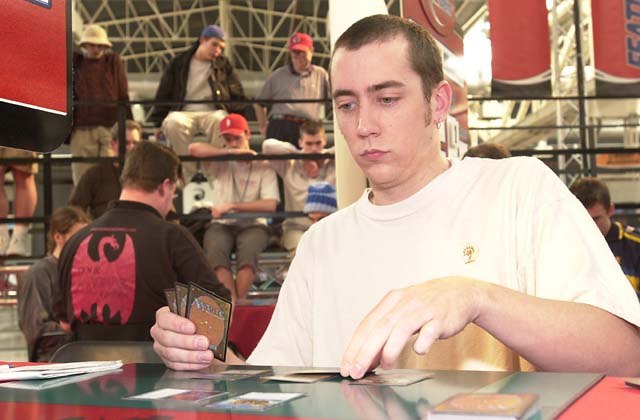 Price was the one feeding Comer during the draft and he took first pick Probe (over Kavu Chameleon and Serpentine Kavu). Comer had first-picked a Demise, but he saw the writing on the wall and immediately shifted into green. Price kept passing him good green and red throughout the draft, including that Nemata in Planeshift along with third pick Magma Burst. Price's deck looked good, but Comer's was just better. The loss eliminates Price from Top 8 contention, but he's still in good position to make some money and, more importantly, some Pro Tour points. Meanwhile Comer is probably starting to taste the Top 8.