The only two Americans in the tournament, and they find themselves paired against one another. Fortunately, it has less to do with conspiracy and more with their respective strong performances. Both need at least a win and two draws, so the loser will need to win out to make Top 8. It's looking good for Shvartsman, since Long was complaining that his draft was a disaster, and that he would need a lot of manascrews in order to win. 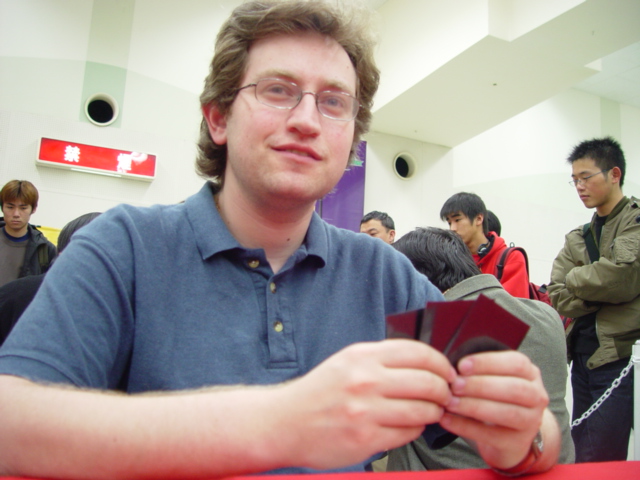 Shvartsman won the die roll and chose to kick off, seeing a hand of five lands, an Egg, and Repel. He kept. Long started the beats with Barbarian Outcast and Cabal Torturer. Shvartsman hid behind a Mystic Zealot. Reckless Charge let the Outcast come through for five, and then five more on the following turn. Shvartsman had made a Soul Scourge in the meantime.

Long was relentless. While Shvartsman came overhead for three, he swung into the Zealot with his Outcast, saving with the Torturer and finishing the job with Firebolt. Shvartsman Repelled. He desperately needed that blocker. Long attacked again, and Shvartsman let it through. Long reused his Firebolt on the Scourge.

Shvartsman took over, removing the Torturer with Patriarch's Desire, and playing one of his own. Long was apparently out of gas. He had an impressive array of lands in front of him.

Long did find a Dirty Wererat. He took out Shvartsman's Torturer with a Barbarian Lunatic. Mystic Visionary was a poor substitute. Long got back his Lunatic with Morgue Theft, but it didn't feel like either was making any headway.

That was when Shvartsman topdecked Whispering Shade. For a moment it looked like the end, but Long was ready with Patriarch's Desire. He also dropped Braids. Shvartsman had no play. He was at six. Long thought about going for an all-out attack, but held back. That let Shvartsman draw into his Deep Analysis, which served up a very timely Embolden. 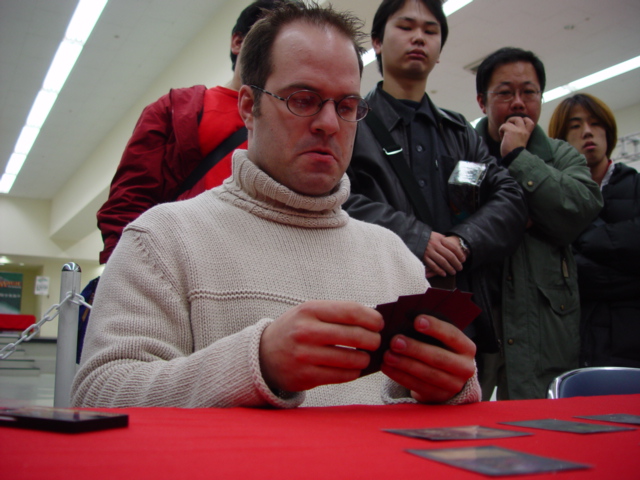 Long decided it was time. He sacrificed Braids (needing all of his mana for his plan) and attacked all out. The Wererat got through, and Long hit threshold. Shvartsman showed him Embolden. Long frowned. His Scorching Missile only reduced him to one.

Now Shvartsman extended his defences with a Pilgrim of Justice. He swung with the Zealot and spent his Embolden stopping the Wererat's damage. Long aimed Volley of Boulders at his head, and Shvartsman sacrificed his Pilgrim to save. He attacked again. If long found a land, he could flash his Missile back for the win. He did not.

Long started game two with the Lunatic. Alex calmed him down with a Pilgrim of Justice. Long's next play of Ember Beast had to wait. Shvartsman had a Patriarch's Desire to take down the Lunatic. Long was stuck at three land and could only manage a Barbarian Outcast.

Shvartsman tried to bring the beats with a Soul Scourge, but Long had Firebolt handy. He also had Morgue Theft for his Lunatic. Shvartsman had Militant Monk, but couldn't power through. Long hit four land and didn't have much to do with it. Petravark stole Shvartsman's island, but he didn't have any blue cards anyways.

Fed up with this waiting game, Long attacked. Shvartsman blocked and played Embolden. Next turn, Gloomdrifter got riled up by Reckless Charge and hit for five. The Outcast met the other half of that Embolden. The Theft brought the Lunatic back, but Shvartsman had the second Embolden, frustrating Long to no end.

Neither seemed to be able to get anything going, having hit big land pockets. Long's Gloomdrifter was forced to trade with Crypt Creeper, leaving him with just an Ember Beast. Soon he found a second, and that spelled trouble. Shvartsman drew Deep Analysis, and was rewarded with Aven Flock and Pay No Heed. He let himself fall to four.

A second Flock showed up for Shvartsman, and now the race was close. Long got Dirty Wererat and tried to end it, but was thwarted by Pay No Heed. Shvartsman attacked, and could bring lethal damage next turn. Long got busy with Reckless Charge and flashed it back. Shvartsman showed him the second Pay No Heed. Long dropped his hand of lands on the table and conceded.