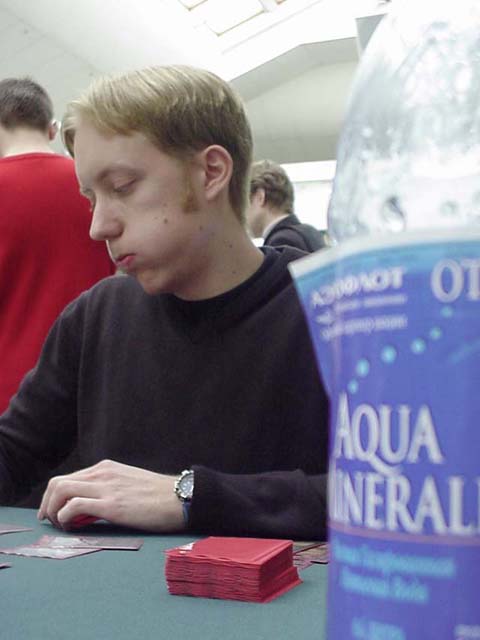 Both of these players were on 8-2 coming into this match and the winner would have a great chance to make the top 8, whilst the loser still had an outside shot at it.

Jorstedt went first in game one and got the perfect start for his deck - second turn Nightscape Familiar, third turn Blazing Specter. The Specter forced Antoine - playing the Go-Mar deck along with the other French and Ryan Fuller - to discard a Plains before he could use Dromar's Charm to get rid of it.

Mattias then cast a Void, choosing three, but this didn't hurt Antoine since he had Spite/Malice, Fact or Fiction, and Teferi's Moat in hand. Jorstedt summoned a Ravenous Rats, but Antoine could easily afford to discard his card. The Fact or Fiction had netted him an Absorb, land, and Galina's Knight.

Not afraid of the two 1/1 creatures, Ruel took the opportunity to cast Lobotomy, revealing that Mattias only had land in hand. Top-decking plays a big part in this format as well, and the Swede revealed that he was pretty good at it, drawing and attacking with Blazing Specter. Antoine tapped out for Teferi's Moat to stop the Rat and the Familiar attacking, and Mattias drew Ghitu Fire to put him down to six.

With a Keldon Necropolis in play, Antoine had only one turn to draw something, and he didn't, so it was on to the second game with the Frenchman muttering about how his opponents always topdeck.

Antoine went first in the second game, and laid a second turn Galina's Knight. An Addle from Mattias revealed that Antoine only had two Opts in hand and a lot of land. Ruel managed to draw a second Galina's Knight, and started to beatdown.

Mattias played a Nightscape Familiar on his third turn and a Ravenous Rat on his fourth, allowing him to potentially double-block one of the Knights. Antoine decided to hold off despite the fact that he could use Dromar's Charm to kill one of Jorstedt's creatures, and used the Dromar's Charm at the end of the Swede's turns instead. 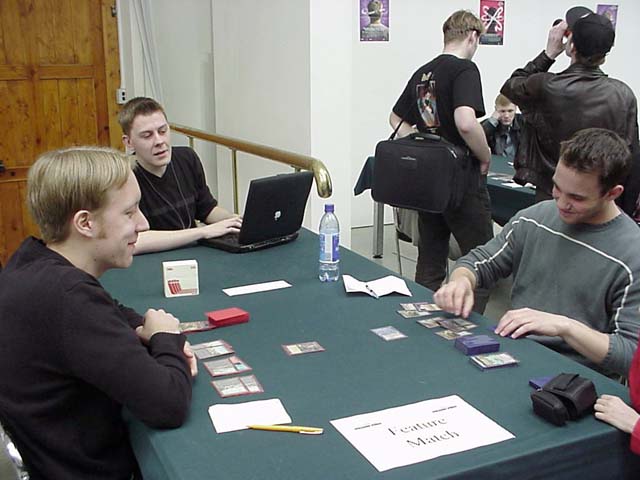 Jorstedt Addled Antoine who cast Fact or Fiction in response. The Addle revealed that his hand was pretty good now, as he had drawn nothing but spells since the start of the game.

Mattias tried to cast a Crypt Angel but it was Absorbed, and Antoine took the opportunity to attack again with his two Galina's Knights. This time Mattias was forced to double-block as he was very low on life, and when he tried to cast Addle Antoine had another Fact or Fiction.

Mattias had to take a mulligan, but found his second hand a little better. Like Alex Shvartsman in the previous feature match, he didn't have a Swamp. All he could do was play a bunch of Mountains and a Keldon Necropolis as all his spells were Black. In the meanwhile, Antoine had cast a Galina's Knight and brought Mattias down to 12 life with it before Mattias found a source of black mana.

Jorstedt used his newly acquired color to cast Void, destroying the Dromar Antoine had only just summoned, and this showed that Ruel had only lands and a Teferi's Moat in his hand.

Antoine continued to draw more land, and Mattias removed his Teferi's Moat from his hand with a Void, then played a Ravenous Rat, followed by a Yawgmoth's Agenda, and replayed his Blazing Specter. 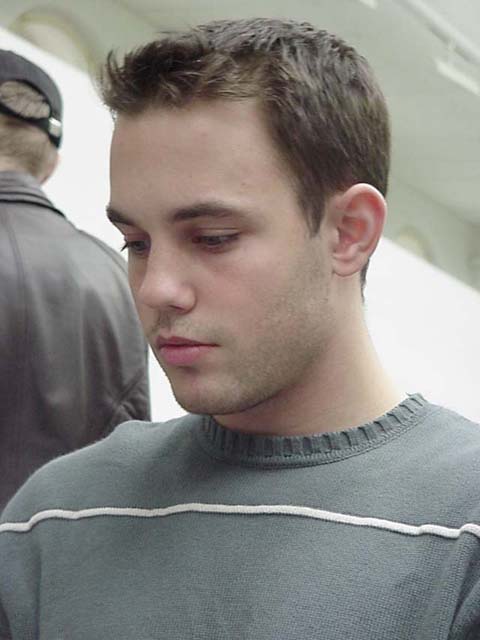 He cast Addle, which showed that Antoine had only four lands in his hand, but Ruel finally drew a spell! His Fact or Fiction showed five spells - two Absorbs, a Crusading Knight, a Rout, and Dromar the Banisher.

He chose the two Absorbs and the Crusading Knight, but by now he was low on life, and Mattias flung the Rat at him with Keldon Necropolis, putting him down to four, so that the Blazing Specter would finish the job next turn. Ruel cast a Crusading Knight and had to Absorb it so that he could survive for another turn, but Jorstedt responded with a Ghitu Fire to finish it.

Antoine was pretty frustrated to lose to drawing twenty land out of his first twenty-eight cards.