Round 11 Feature Match: Bark At The Moonmist

"I'm the sixth best player in the world...if you go by Planeswalker Points," preeminent jokester Gerard Fabiano said as he sat down to the eleventh round feature match.

"Sixth? If you're not going by Planeswalker Points, I'd put you higher," Andrew Cuneo said, meriting a laugh from Fabiano.

The two discussed the draft animatedly while shuffling for the first game, until Fabiano turned to me and said, "Can I do a shout out?" Before getting a response he blurted out, "Hi to Genn and my mom and my sister watching the coverage, and Bobby Peacock!" 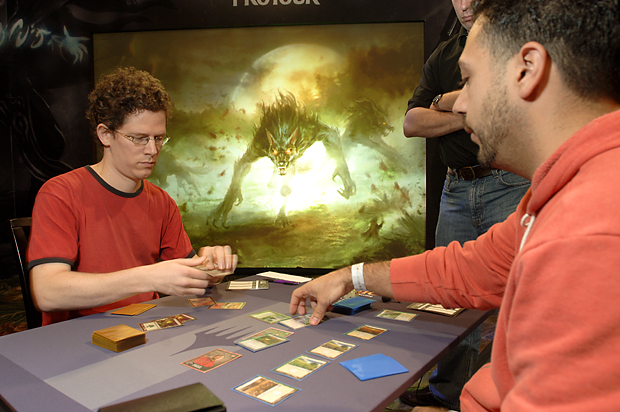 Andrew Cuneo and Gerard Fabiano banter back and forth before diving into their games.

Cuneo started on a mulligan for the first game, but when he went to pick up his second hand he realized he had accidentally picked up seven cards. Judge Ingrid Lind-Jahn issued her ruling: Cuneo would have to shuffle two cards back into his library and re-evaluate his hand from a mulligan to five. It was a tough start for the long time Magic player. Both Cuneo and Fabiano had been playing on the Pro Tour for something approaching a decade, true veterans of the professional stage. Fabiano cast a Midnight Haunting, using two of his own pro player cards as his Spirit tokens, while Cuneo had a Hamlet Captain. 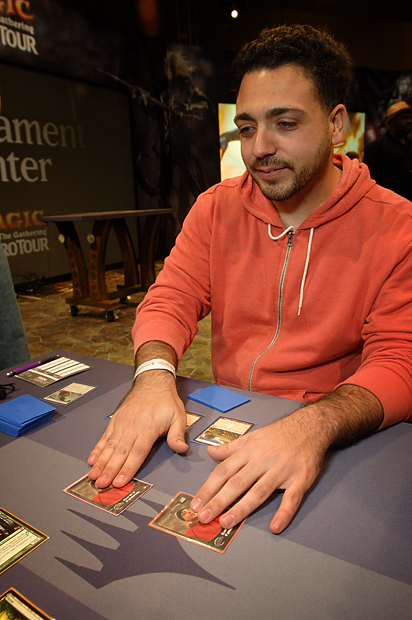 Two flying Fabiano tokens get in for some damage.

A Spidery Grasp allowed Cuneo to take out one of his opponent's fliers. Fabiano had only Plains to show for his lands, and the color screw was holding him back significantly. His opponent managed to transform a Rampaging Werewolf, the 6/4 joining his Hamlet Captain in applying the beats to Fabiano.

An unblocked attack from Cuneo was pumped by an instant Briarpack Alpha and Fabiano fell to 6. He began to do math to see if he had any hopes of winning but it didn't look good for him. He attempted to block in a manner that would allow him to make some number of trades but a Moonmist blew him out instead and he lost his team. A single draw step later and he reached for his sideboard, Cuneo's mulligan misstep not costing him in the long run.

"Do you still live in New Jersey?" Cuneo asked his opponent as they shuffled for the second game.

"I do. I just got a job as a teacher," Fabiano replied before turning his attentions back to the game.

If the first game had been from the white portion of Fabiano's deck, the second game saw him playing from the blue portion. He opened on only Islands, using a Thought Scour to enable a third-turn Stitched Drake. On the fourth turn he had Lantern Spirit and Silent Departure to take out a Daybreak Ranger from his opponent. When Cuneo re-cast the powerful 2/2, Fabiano dispatched it a second time with Grasp of Phantasms.

Under assault from his opponent's fliers, Cuneo had no choice but to cast his Daybreak Ranger three turns in a row. Unfortunately for him, Fabiano didn't miss land drops and was able to flashback his Silent Departure to dispatch it once again and attack to drop Cuneo to 2 life. Huntmaster of the Fells put Cuneo to 4 life, but he was very far behind. When his opponent cast an end-of-turn Midnight Haunting, things looked grim for Cuneo. 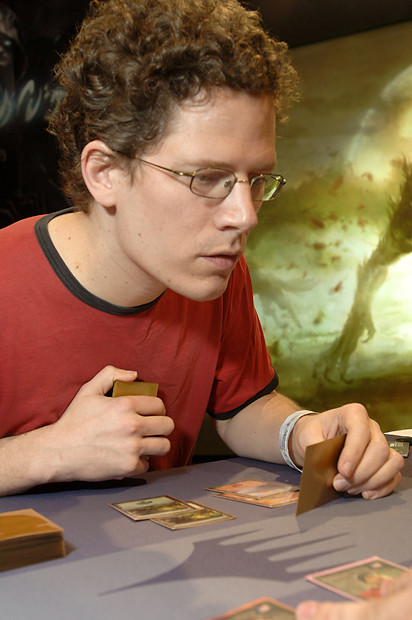 Against a monstrous force, it appeared that Cuneo and his werewolves were donefore...

But he wasn't finished just yet!

Fabiano sent an alpha strike but his opponent had Moonmist. That allowed him to finish off the Stitched Drake permanently with a combination of Daybreak Ranger and the trigger from Huntmaster transforming. Fabiano had Elite Inquisitor and a Headless Skaab after combat and still seemed in control.

Except...he wasn't. Cuneo cast Nightbird's Clutches and turned his team sideways. An Immerwolf from his early turns allowed him to attack for exactly lethal. Fabiano counted the damage and counted it again.

Fabiano shook his head in disbelief. "I thought my deck was good," he said, unable to stop his fate. After a moment of reflection he extended his hand with a smile and wished Cuneo good luck.