Round 11 Feature Match: Battle of the Legends

roomies - and TOGIT/CMU brain factory members until Osyp kicked Eugene out due to his frightening diet of hamburgers, Coke and Andy Capp fries - these guys remain the best of friends, kinda, sorta, no, not really; the animosity was in the air. 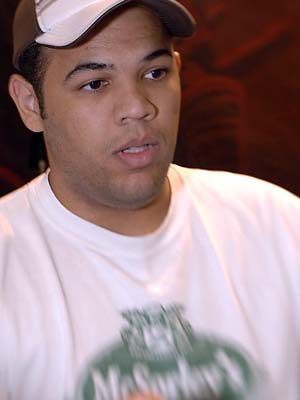 Eugene won the last match between these two legends with a legend of his own: Umezawa's Jitte, which, if the rumors are to be believed, could end up to be a decent card in Standard.

Somebody about to get the taste slapped out they mouth. Let the bloodshed begin!

Osyp liked his starting hand, while Eugene (formerly "Eubroken") made seven become six. After playful banter and hurtful words aimed at each others' domes, Eugene kept his six.

Joseph Black dropped turn-one Llanowar Elves and sent into the zone, lacking the critical Wood Elves backup. His met , his other Hierarch met Mana Leak, and the Elves were introduced to in an attempt to find a third land for Eugene.

Osyp took this opportunity to sneak in Kodama of the North Tree, while Eugene peeled a land and cast , targeting himself like a greedy bastard, apparently looking for the Cruel Edict that he doesn't have in his blue-white control deck.

The beatdown machine that is Osyp replayed the Elves and shipped it back, just in time for Wrath of God to bury target men. Always ready for just that game, Osyp recovered with Arashi: it hit and stuck with a thud, daring Meloku to say "sup?"

Well, how about Yosei then?

This caused a pause while Osyp considered his moves. Into the zone Arashi went, Eugene blocked, and Okina, Temple of Old Wise Peeps saved the day.

Eugene dropped Keiga into the green zone. Osyp then red zoned the Elves and Arashi. In head-on-hands mode, Eugene threw Keiga in front of the Elves as a reverse speed bump, while Osyp pumped his fatty, getting Eugene to a precarious three measly scrawny little itty bitty life in the process. Wood Elves played Thawing Glaciers and over it went. 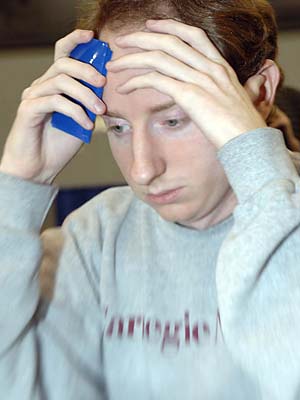 Eugene Harvey tries to kill Osyp with his brain.

After Keiga sent for 5, Eugene cast Tidings, left three mana and Miren open. He sacced Keiga, nabbed Arashi and shipped it over. With the control deck tapped out, Osyp freely cast Yosei, and the battle of the legends had truly begun.

On an apparent suicide mission, Eugene's Arashi turned sideways, directly into the path of Yosei. Osyp considered whether or not to take the "bait," then did just that. Eugene's sleeve revealed…nothing. Both fatties snuffed it and Yosei tapped down Eugene's board like suddenly Stasis ain't cost nuthin' but the rent, yo.

Facing three untapped mana, but only a singleton blue, Osyp cast . Eugene responded by ing his own tapped land, grabbed another blue and cast Hinder. Eugenius, hells to the yes.

met , and Osyp was forced to exhale. He did, however, drop Vitu-Ghazi, which gave him at least a ghost of a chan- scratch that, P.S. you, have a token and a basic land, pls/thx.

hit next turn, but the token met and left Eugene with only seven cards to Osyp's two. Facing a probable wall of permission, Osyp tried Hierarch, which surprised everyone when it made it in. Wrath explained Eugene's motive in letting it through fairly well.

Osyp evened the odds with a mulligan of his own and could only muster bounceland/ action by turn four. On turn five, hit and stuck; Eugene tapped out and Meloku reared his ugly head on the other side of the table.

Free to cast aspersions (upon anything we did), Hokori and another expose every weakness however carefully hidden by the kids. Eubroken made a Eutoken and sent it over to Hoboken, which is pretty close to where Osyp lives and it rhymes.

Meloku, much like Kevin Federline's baby mama(s), simply spit out a child every so often and sent it over. After a couple turns of staredown, Osyp sent his team, with only Meloku available to block - it took out Hokori. 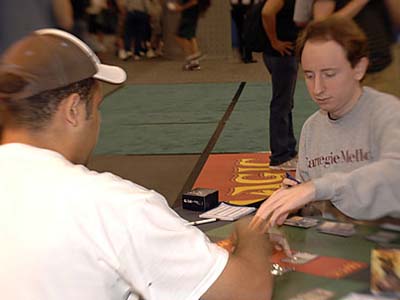 The Red Zone heats up.

A third made it in, giving Osyp the trifecta.

Meanwhile, Meloku kept at it, and neutered one of the dogs. Or spayed, whatever the boy dogs get.

Arashi went and got himself discarded, which cleared Mr. Britney Spears and children, and allowed Osyp and the wolves to smash face.

Naturally, Eugene had the Wrath; unnaturally, Osyp had a pair of Llanowar Elves, which looked awfully puny across from a freshly cast Yosei. Alas, Osyp played his own Yosei, and target legends buried their target selves, tapping target stuff along the way.

Again Debtors' Knell hit the table, and without multiple with multiple backup, all Osyp could manage was a visible slump and a limp Wood Elves.

Yosei came back from the dead, and Keiga sat down beside her. Osyp drew his card and offered the hand in a gesture of warmth and compassion for his fellow man. Oh, and a concession.

Eugene Harvey wins 2-0 and goes to 7-4, while Osyp Lebedowicz finds himself in the uncomfortable territory of 6-5 land.