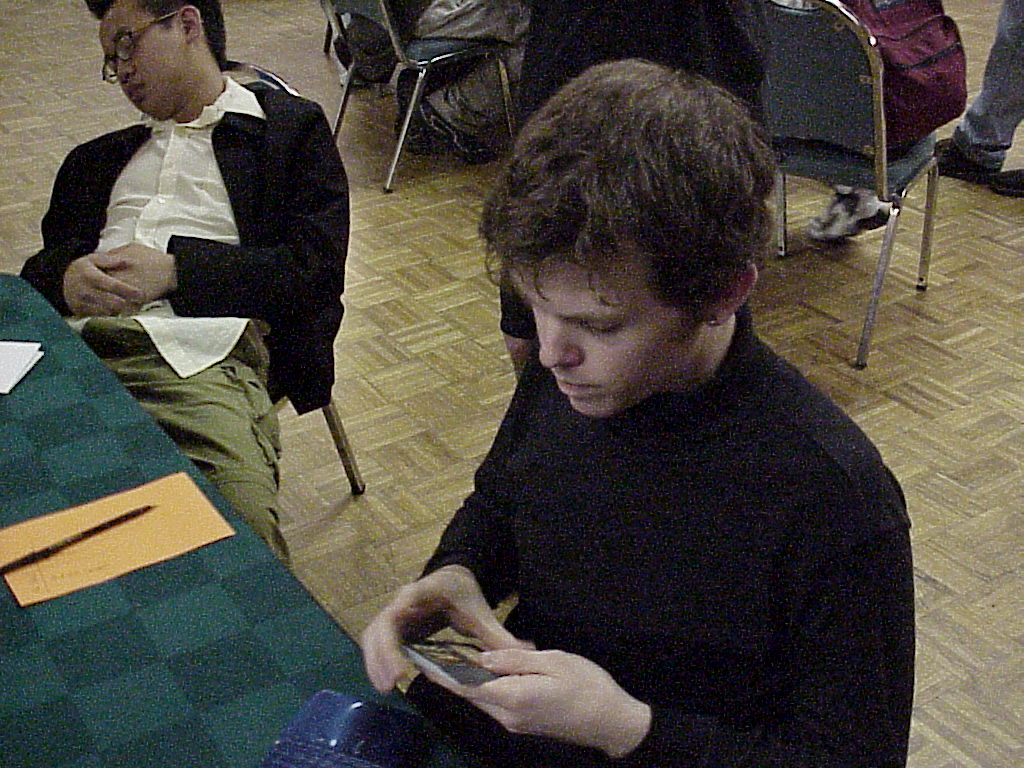 They call him "The Great One." There's a reason. Bob Maher, Jr. is one of the most recent breakout stars in professional Magic. This year's Pro Player of the Year, Bob has been on somewhat of a hot streak ever since his win at Pro Tour Chicago last year. Dan Clegg is no slouch either, especially as of late, being a key part of the team Rolled-up Aces, that took third a month ago at the Team Pro Tour in New York. Both players thought they had good decks, though both admitted that they thought Dan's was a little better, and better in the matchup. With that, they were off to game one...

Bob's red/black deck came out a little slowly after a mulligan to a hand that contained only a Swamp as its lone mana source. Too bad for Clegg that he couldn't really take advantage of the slow and sub-par draw on Maher's part, as he had the opposite problem: too much land. Bob hung around for a while, making good use of multiple Mourning's, combined with a Reckless Spite, before he finally started to draw out of his mana problems and play some larger creatures. Bob managed to fight off a pro-red Galina's Knight, Rampant Elephant and Zanam Djinn, all before he ever drew a Mountain. Clegg, however, just kept drawing land after land after land. Finally Dan started to stabilize but a little Phyrexian Battleflies kept pestering Dan for two a turn, and after Dan got dangerously low, (4 life) he Repulsed them in hopes of drawing some sort of answer. He found it. Armadillo Cloak came down on the Ardent Soldier and gained him some precious life, but it was all for naught, as the soldier got double Mourninged and Bob found a Cinder Shade on the top of his deck for the win a couple turns later.

The second game was a good one, and both players saw all their respective colors of mana, with neither player really getting mana-flooded so to speak. A few cards considered by many to be 'less than good' appeared in play for Bob this game, and many of the creatures on either side spent their short time in play running into each other and trading. Forced to kill an early Tidal Visionary because it would negate most of the black kill in his deck, Bob seemed a little miffed at having to use an otherwise great removal spell (Scorching Lava) on this little guy. Good for him he did though, as Plague Spores and Agonizing Demise were then able to remove key blockers like a kicked Prison Barricade. Clegg meanwhile spent his time playing out more 'Master Decoy' creatures, it seemed like there was 40 of them in his deck at times. Clegg had a very key Washout black at one point, but after Bob started building up attackers, things started getting a little dicey for him. After an alpha strike by Bob that got Clegg to 5, with the threat of another one for the win next turn, Clegg found a Repulse, took out the Shivan Zombie, untapped, and sent his own crew in for the win, doing exactly five, and with nine minutes to go.

Both players hurriedly shuffled up for game 3, and were playing awfully fast, both realizing that a draw was pretty bad for them right now, as both had their sights set on top 8. Clegg came out of the gates fast with a turn one Stormscape Apprentice, and a turn two Prison Barricade, to counter the turn two Rage Weaver and turn 3 Cinder Shade (one swamp only) by Bob. Bob was having more trouble drawing the 'quality' spells in his deck, as Nightscape Apprentice came down too. Meanwhile, Clegg was content to sit on defense behind his high toughness white creatures, and ride his decoys into a position to win, I could see the plan forming in Bob's head with his Reckless Spite, but the turn before it could get cast, Clegg dropped an Obsidian Acolyte, with a white mana open as well. (As it turns out, he left multiple white mana open throughout the rest of the game.)

When the kicked Ardent Soldier went to the air with a Wings of Hope, the clock was ticking, and when time ran out, Bob was at 3 life. Bob tried to hang in there but the Soldier combined with that timely Repulse was too much, and Clegg went on to take the match on the extra turn 3 of the 5.