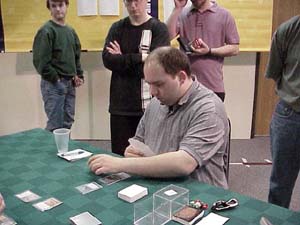 The Great One, Bob Maher, Jr., current Pro Tour Player of the Year and champion of Pro Tour Chicago sat down at the table across from Thomas Andersson, who finished ninth at the first Pro Tour and the first ever Magic Invitational. It is a battle of "New Blood" and "Old Blood," with the winner in a very good position to make Top 8. The loser of this match would have to win out to even have a possibility to make the Top 8.

Maher was playing a green-white deck with many solid cards. Noble Panther, Magnigoth Treefolk, and Fleetfoot Panther were complemented by a full plate of Apprentices, creature tricks, and topped off with Rout for the best in creature control.

Andersson, on the other hand, was running with a black-blue-white deck. Collective Restraint slowed his opponents down considerably, while he built his defense and offense up.

After rolling a die, Thomas decided to play first. 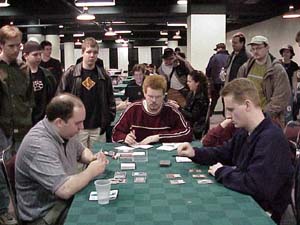 The first couple of turns were rather uneventful, with the players playing lands and passing the turn. Maher's deck began to work like it should; pumping out threat after threat, while Thomas just sat by and watched. Eventually, Thomas played a Glimmering Angel and enchanted it with Sinister Strength. Things were looking very good for him. Maher continued to play threats in hopes of outracing his opponent. The outlook for Maher, however, looked bleak, as Thomas slammed down a Collective Restraint and began the life race with his Glimmering Angel. The Restraint made Maher change his strategy. Using his various "tapping" apprentices to tie up Thomas's ground creatures, Maher was able to keep himself ahead of the life race with an unblockable Magnigoth Treefolk. The combination of Explosive Growth and Gerrard's Command ended this game with Maher winning in the face of seemingly certain defeat at the hands of the Glimmering Angel.

Between rounds, the air was tense. Not very much was spoken, as both of the players were concentrating on making their decks better. 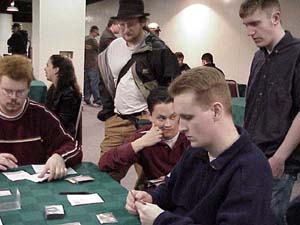 Thomas opted to play first, and his start was very good. A second-turn Metathran Zombie was his answer to Maher's turn-one Sunscape Apprentice, and it allowed him to cast the dangerous Silver Drake the turn after. Maher kept up his strategy of quick beats, and had a Noble Panther and a Pincer Spider on the board in consecutive turns. The Pincer Spider stopped the Silver Drake and soon Maher was in control of the game. The turning point of this game was when Maher started to attack. A Sunscape Apprentice was enhancing his Pincer Spider and Noble Panther, and he was swinging for six points of damage a turn. The last play of the game saw an attacking pair of creatures for Maher, seven life for Thomas, and a pair of instant creature tricks on the lone unblocked creature.

"I should have drawn Swamps," moaned Andersson. And indeed, his hand was full of black spells.

Final Result: Bob Maher wins the match 2-0. He enters the last draft of the day in a healthy position for the Top 8.