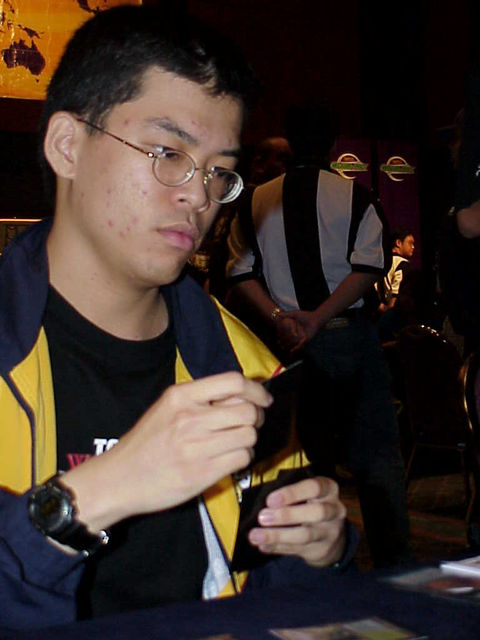 By now, Chai should need no introduction. However, his opponent, Bao Qiang Lin, otherwise known as one of the loudest players on this side of the world will definitely need some. In fact, he is known very well in Singapore for his various trash-talking antics, each and every time he plays. Not bad for somebody who stands just over 5'5". To date, he has yet to claim any major titles or Top 8s. Today, he has chosen to take his Crosis-Go deck to the Grand Prix, and now faces Royce Chai and his 'Monkey, May I?' deck.

Royce chose to play first in the opening game. Despite the fact that his hand did not hold any of the two drop bears that define this format, he decided to keep. Lin's hand was quite the opposite: he held two Nightscape Familiars and two Ravenous Rats. The first creature in play was Lin's Nightscape Familiar, which Royce Urza's Raged away on his turn. Fearing Exclude, Lin decided to hold back his creatures until he had additional counterspell backup. As a result of that, no action other than land drops were played on both sides, except the Lay of the Land that Chai cast.

The first person to move was Chai and his Blurred Mongoose. Not willing to continually take damage from the 'goose, Lin tried for a Ravenous Rats. Royce spent his second Urza's Rage to remove the Rats and attack through for two points. When Lin tried for a second Ravenous Rats, Chai decided to summon a Mystic Snake in response, but it was Excluded from the game. Chai then had to spend a second spell, a Fire/Ice to rid himself of the rodent. Since Lin had only two mana open, Chai summoned a Gaea's Skyfolk to add to his attack force.

The next in line to stand in front of the Blurred Mongoose was Lin's Nightscape Familiar. This time, it proved to be slightly harder for Chai to remove. When a second Familiar entered play, Chai's Mongoose was finally cooked. Soon enough, Lin added a third Nightscape Familiar (that's all four, for those who're counting) and could actually start racing the Gaea's Skyfolk. Undermines are surprisingly good at racing, and after Lin eventually rid himself of the Skyfolk with a Fire/Ice, Chai soon found himself at three life, and no way to remove two Familiars from the board. 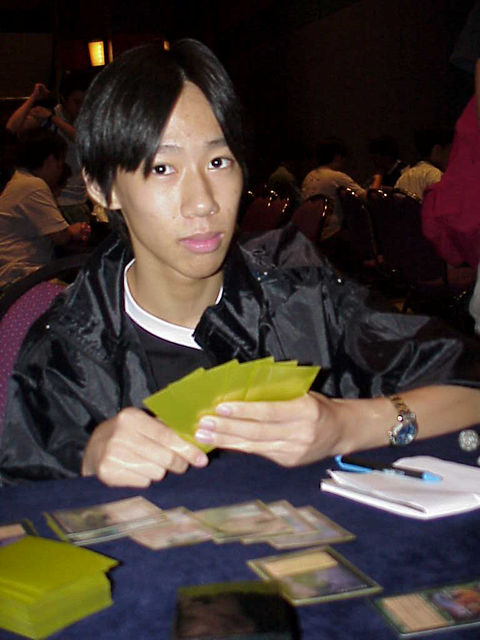 Remembering the rodents which had caused him so much trouble, Chai brought in two more Dodecapods from the sideboard, along with four Gainsays and an Urza's Rage. He decided to then take out a pair of Fact or Fictions, Mystic Snakes, Prophetic Bolts and a single copy of Repulse. On the other side of the table, Lin had a full set of Gainsays of his own to bring in, as well as one Tsabo's Decree and one Void. He took out one Ravenous Rats, his Yawgmoth's Agenda, and two Recoils and Spite/Malice.

It wouldn't do much, however, as Chai's hand was simply amazing. Going first, he went for a second turn Kavu Titan, and followed that with a third turn Kavu Titan. When Lin tried to Repulse the Titan on his third turn, Chai had a Disrupt. When Lin tried to Void away both Titans, Chai held another Disrupt. In a desperate attempt to try and stay in the game, Lin even Undermined Chai's Lay of the Land, since Chai was light on mana, but still died to the Titanic duo.

Both players adjusted their decks minimally for the deciding game, switching one card each. Chai brought back the Repulse, while Lin brought back the Ravenous Rats. This time, both players held bears in their hands, and by turn two, a Ravenous Rats stared at a Gaea's Skyfolk. Chai's force then grew by a Blurred Mongoose, adding additional deterrent to Lin's attack. When Chai tried to further increase his attack force with a Kavu Titan, Lin cast an Exclude, and Chai Disrupted. Lin had the mana open and paid the additional mana. Chai drew a Dodecapod off the Disrupt. 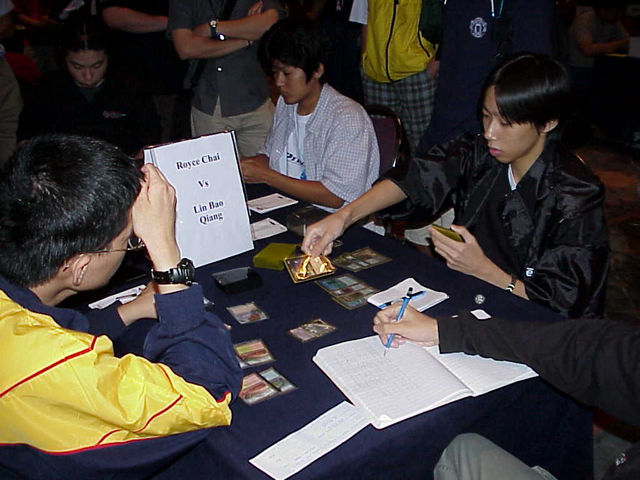 In a cruel sense of irony, Lin's next draw step gave him a Ravenous Rats. His expression changed when a 5/5 monster suddenly came into play. The only saving grace was that he drew a Nightscape Familiar on the next turn, and eventually a Fire/Ice to off the Gaea's Skyfolk. As both players had depleted their hands by now, neither player wanted to move lest the other be able to garner any additional card advantage.

Things finally kicked in when Chai drew a Repulse. He tried to Repulse the Nightscape Familiar, whereby Lin Repulsed back the Dodecapod. Chai Gainsayed Lin's Repulse, and Lin Gainsayed Chai's Gainsay. Both creatures went back to their owner's hand, and both players drew a card. Since Chai had 4 mana to spare, he replayed the Dodecapod, without it's bonus. Of course, the problem now is that Chai had drawn into his lone copy of Keldon Necropolis, and Lin stood at a low, low total of five life. After the Dodecapod was tossed at Lin, Chai Urza's Raged for the kill.

4 Lay of the Land 3 Disrupt