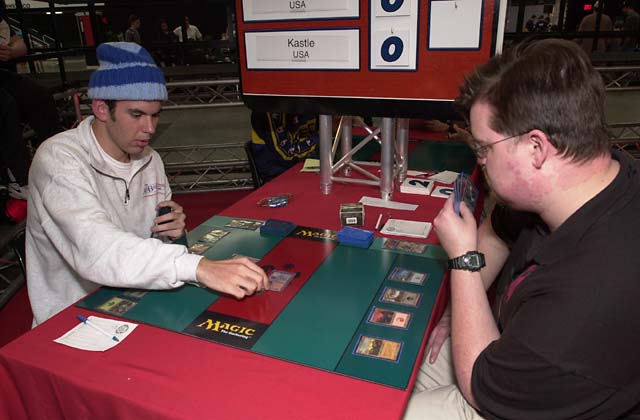 Darwin and Chris chugged their way through this match with a little, but not the usual amount of trash talking one might expect in a Your Move Games vs. AlphaBetaUnlimited.com match - Chris Benafel being one of the masters of understatement and consolidation.

Chris had a g-r-b deck with the black mainly in there for Darigaaz the Igniter, whilst Darwin was sporting a r-b deck with a splash of blue - his trademark colors in this format. Darwin had already won a GP in Manchester playing a similar deck to this one.

Darwin won the toss and elected to play first, but his opponent made the first creature - a Thornscape Familiar. Darwin replied with a Hooded Kavu, but did not want to block the Familiar straight away and hence took the first damage down to 18. Chris made a Bloodstone Cameo on his third turn whilst Darwin made a Nightscape Battlemage, unable to draw a fourth land. Chris then made a Kavu Recluse and passed, choosing not to attack with his familiar. Chris's mana had been slightly retarded by a multiland on his third turn.

On his 5th turn Darwin could still not draw a land, but he did manage to lay a Lava Zombie - returning the Battlemage to his hand. The Hooded Kavu then attacked and traded with the Kavu Recluse. Chris then made a Kavu Climber on his 5th turn (which traded with the Lava Zombie) then Darigaaz, the Igniter on his 6th, leaving one green mana open. Darwin had managed to drop a Mire Kavu after drawing his 4th land, and he chose to attack with this to coax the Dragon to block, knowing that if Darigaaz lived he was a dead man. Not knowing whether Darwin was bluffing a burn spell or not, Chris still chose to block confident with his Gaea's Might in his hand. Sure enough the Kavu died and Kastle tried in vain to Soul Burn the Dragon to deliver the final 2 points of damage, but the Might saved it. 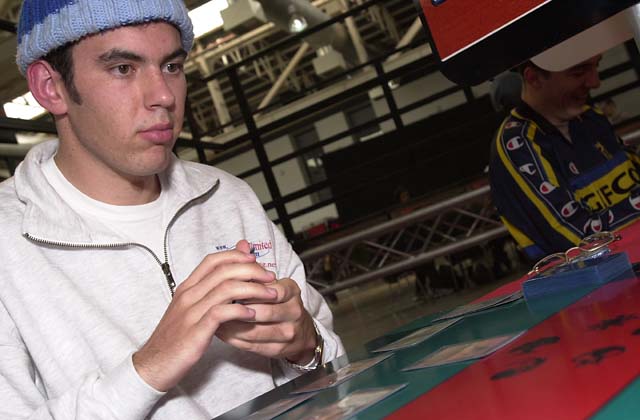 To add insult to injury Benafel cast a Serpentine Kavu to join the 6/6 flier and the game was won in no time at al, despite a desperate Rushing River from Darwin - hoping to draw his Terminate.

Chris sideboarded in a Confound, while Darwin took out his Fact or Fiction and his Rushing River to make a more streamlined b-r deck - figuring that he had to be fast to win, and that he needed better draws.

Again choosing to go first, Darwin managed to make a turn 2 Shivan Zombie, which traded with a turn 2 Thornscape Familiar, only to be replaced by a second. Not bothered at all, Chris made a turn 3 Pincer Spider, which was quickly upstaged by a Lava Zombie. With both players having explosive starts, Chris continued the trend by casting both a Fertile Ground and then a second Thornscape Familiar, but they chose not to stop the Lava Zombie who dealt the first blow of the match to Benafel, reducing him to 16. Darwin then made a Hooded Kavu and replayed the Shivan Zombie that had been gated.

Boom! Darigaaz came to town again, but it too was too scared to block the Lava Zombie while tapped out, so Chris went down to 11 whilst a Volcanic Imp bravely came into play to offer itself as a sacrifice to the nasty fire-breather. Sure enough it chumped the Dragon, but the Lava Zombie then had to face a Kavu Scout, which was a 3/2 due to the three different land types Benafel had in play. 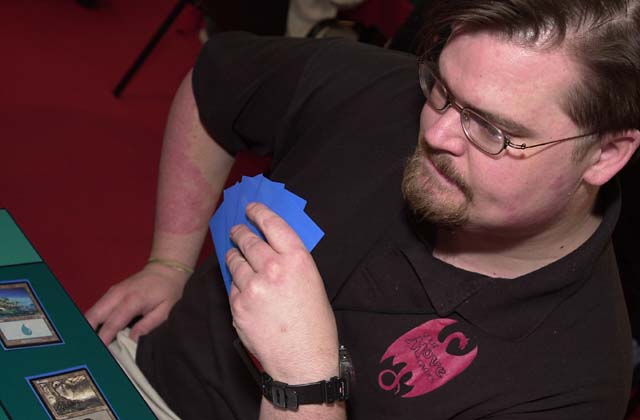 At this point a huge roar rose up from the gallery, as on an adjacent table Mike Pustilnik had cast Obliterate on Scott Johns. (Scott went on to win the match.)

Thinking he might still be in with a chance Darwin cast Soul Burn on the Kavu Scout but Benafel had the Confound! Unable to draw his one Terminate, the 'Castle' then fell to the Dragon.