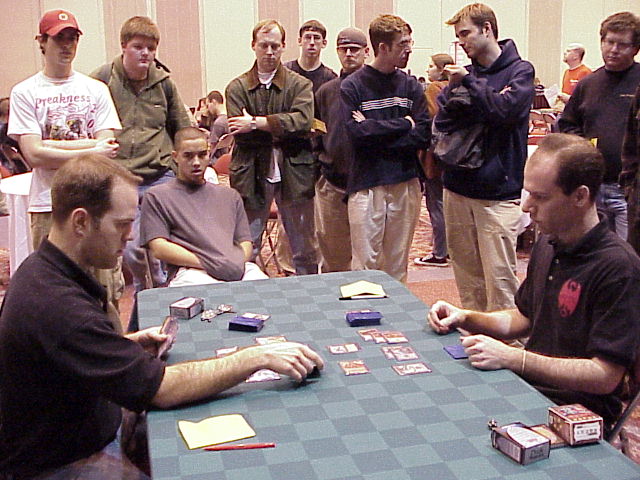 Before round 11 began, Chris Pikula requested that all pictures of this feature match have a halo superimposed over Dave Humpherys' head and horns put on Mike Long. There is no match possible where the players differ more in reputation. Long is universally hated by pro tour regulars while "the Hump" is much loved. Long drafted a blue/white/black deck with Glimmering Angels, Strength of Unity, and Dromar, the Banisher.

Long filled out his scoresheet before game 1 in his usual manner - "Tongo" on one side and "Infidel" on the other - and then proceeded to play Angelic Shield, Galina's Knight, and Benalish Heralds all before Humpherys played his first spell (which was Ancient Kavu). Long blocked the Kavu with his Heralds and then when Humpherys tries to finish it off with Soul Burn, Long let him - choosing to leave his Angelic Shield on the table because he had plenty of spells to cast over the course of the next few turns, including Glimmering Angel and Strength of Unity. (Long has had this combo built into both of his decks.) Long was soon forced to leave his Angel back on defense because Humpherys played out a pair of Phyrexian Reapers. The Hump then played Firescreamer, which Long Excluded. Humpherys immediately played a sixth land and an Andradite Leech, happy that Long had taken the bait. 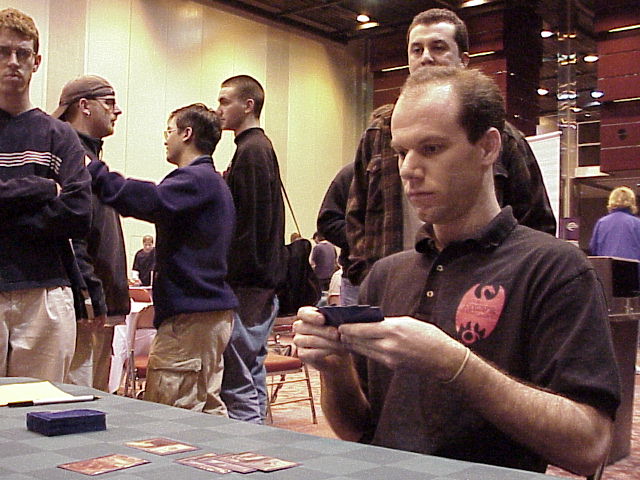 Long drew Stormscape Apprentice - a possible Leech answer if it lived - but failed to draw the Swamp he needed for Dromar. The Hump first pointed Lightning Dart at the blue tapper. This time Long did sacrifice his Shield. When Hump then attacked with his Leech, Long traded his 4/4 Angel for it. He no longer had time to get his tapper active. On his turn, Long finally drew the Swamp he so desperately needed and windmilled Dromar onto the table. When the Hump then swung with everyone, Long accurately sensed that he Humpherys had Soul Burn in his hand and thus chose to risk Dromar in combat and trade off a Glimmering Angel, killing Ancient Kavu and a Reaper in the progress, taking 3 down to 9. Humpherys played and used Smoldering Tar to finish off the dragon. Next Long top-decked and played a 4/6 Wayfaring Giant. Humpherys Soul Burned it for 6. After that flurry of activity, Humpherys was out of cards and Long was down to just a pair of Merfolk plus the Apprentice that was tapping a Reaper every turn. The pro-color 2/2's went all the way. 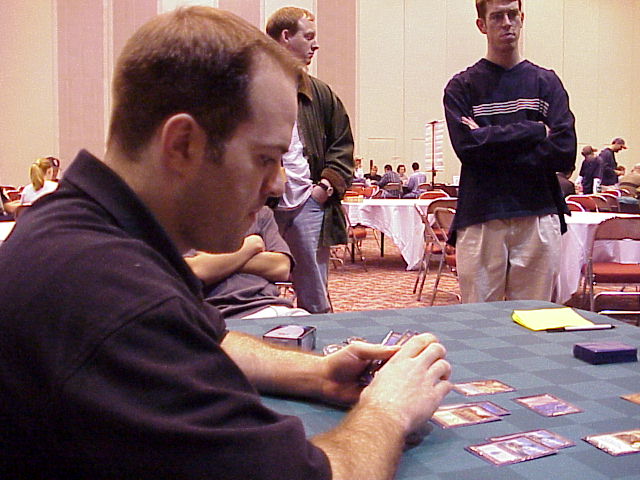 Humpherys chose to draw first for game #2 and Long once again started quickly, this time with Tidal Visionary and the crucial Obsidian Acolyte. Long then left up Exclude for a few turns, but Humpherys just pumped his two Phyrexian Battleflies and served for 3 and then 4. When Long played out a tapper, Humpherys finally played another creature - Firescreamer - saying "Here's something for you to Exclude." Long did. For his next trick, Long untapped and said "Now I'll creatively play a dragon." Hump thought and Zapped away the Acolyte , Defiled the Apprentice, and said done. Long dropped Acolyte #2, gave his dragon protection from black so the Battleflies, couldn't chump block. Two attacks later, the match win was his.