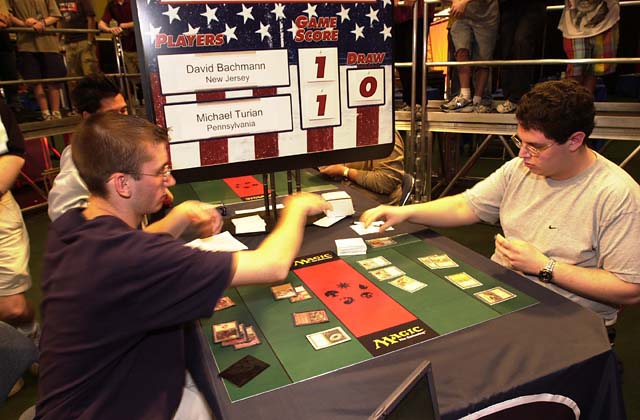 It doesn't get much simpler than this - win and you get to draw into the Top 8. Lose and you have to win the last round and sweat your 'breakers. Mike Turian brought an aggressive, monowhite Rebel deck into his round 11 Feature Match while Bachmann was running Bridge Wildfire.

Orb-Opposition decks have gotten a lot of attention as the hot new archetype made possible by 7th Edition, but Bachmann has other ideas about which cards in the new set are good. He's running Ensnaring Bridge, Grafted Skullcap, Pyroclasm, and Wildfire (not to mention Shock, Stone Rain, Pillage, Fire Diamond, and Millstone). His Burning Bridge deck is completely creatureless and just tries to blow up everything it can while locking up everything else and winning via Millstone. If you ever see a 7th Edition only constructed tournament, this might be the deck to play. Based on Bachmann's success so far, it might even be the deck to play in Standard. 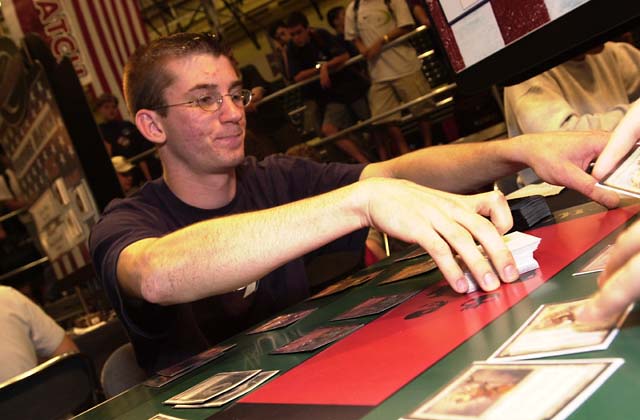 Turian's Glorious Anthem on turn 3 of game 2 took a lot of the sting out of Bachmann's Pyroclasms (two Steadfast Guards survived), but Bachmann blew up all his lands with Tectonic Break and then played an Ensnaring Bridge. Turian patiently waited for his deck to deliver up two lands and then the Disenchant he was holding evened the match at one game each.

The players flew through the first two games in about 10 minutes, but the pace slowed a bit in game 3. Bachmann killed Turian's first Sergeant, but the second survived to start recruiting. Bachmann played out two Flowstone Walls so he could block on the ground and, more importantly, an Ensnaring Bridge that held all of Turian's team back. Turian had Glorious Anthem and an ever-growing army while Bachmann had an empty hand and a pair of Millstones. 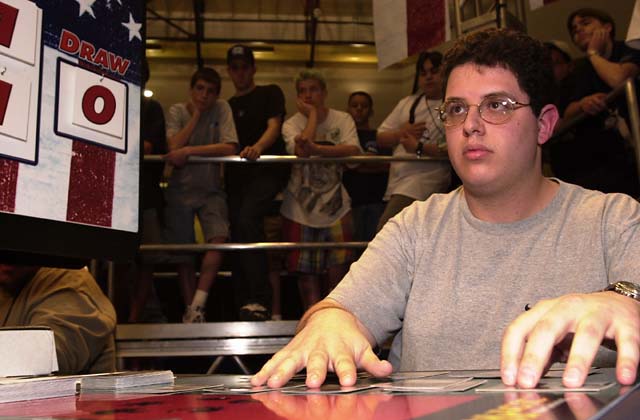 They raced to see whether Turian could draw a Disenchant before Bachmann milled them all away. Bachmann topdecked a Wildfire and now Turian had to re-recruit his whole army. He'd been holding back Lin Sivvi - it didn't take long. Could he draw Disenchant? That's what the Top 8 berth came down to. Turian kept shuffling dead Rebels back into his deck with Lin Sivvi so he was less likely to lose Disenchants to the Millstones. Bachmann was blowing up enough land that Turian's Lin Sivvi couldn't completely offset the Millstones, but she still helped. In the end Bachmann's millstones won out - 4 Disenchants and 2 Seals of Cleansing all went to the graveyard over the course of about 10 of Turian's draw phases without any of them winding up in Turian's hand.