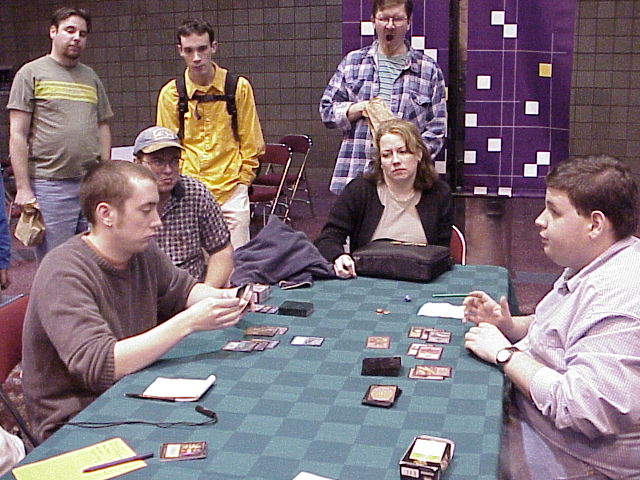 Grand Prix are fun for just about everyone - player and spectator alike. It's like bringing the Pro Tour home to your town. New Orleans is no different, because it gives you Featured Matches of Pro Tour Finals quality. Both David Price and Steve-O have won Pro Tours, both have Grand Prix Top 8s, both have attended the Magic Invitational, there's not much more that these two players can do in the Magic world. As they sat down, it was obvious that the two were good friends, as it's well known that Steve and Dave have worked together in the past. Each is still in contention for the Top 8, though it's likely that the loser won't have a chance after this round. Looking on for this match was a throng of Grand Prix attendees and David's girlfriend, the one and only Shivan Hellkitten, Lauren Passmore.

They rolled the dice to determine who went first, and David won the roll by 1. His opening hand contained only one land, so he threw it back and went fishing for another hand. His next hand was moderately better, and he kept. OMS liked his hand, and kept as well. Dave opened with a Swamp and Island, and played a Dream Thrush on his second turn. We all remember the Dream Thrush as the "little bird that could", so I was expecting some action from the little guy. Steve opened with a plains and mountain, and then dropped an Obsidian Acolyte. Dave's next turn was a Metathran Zombie, and he served with the Thrush. Steve did nothing on his turn but lay land. On Dave's next turn, he used the little bird to turn a Swamp into a Mountain, and Lightning Dart the Acolyte. On Steve's turn, he played another land (a Geothermal Crevice), and Tribal Flamed the Thrush. Dave kept serving with his little Zombie, and wished silently that his deck would deliver something with a little more power. Steve's deck was a little more giving, and on his fifth turn, he played a Pouncing Kavu and served with it. Dave couldn't do anything but play a Mourning on the Kavu and continue to serve with his little regenerator. 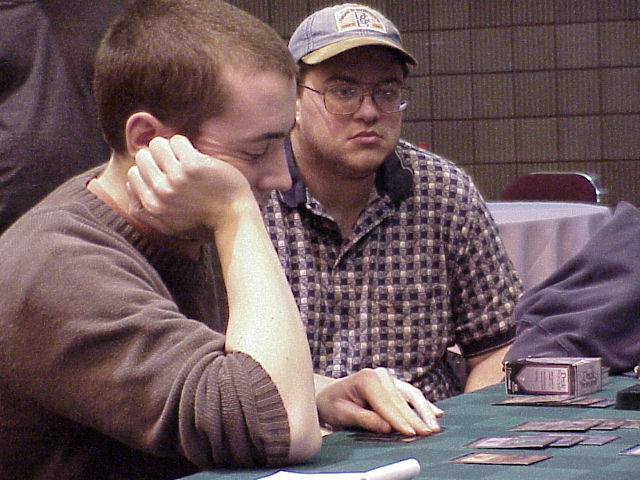 Steve played a Quirion Elf, and named Blue as its color. To cast it, he had to sacrifice his Crevice, but he had other red mana sources available and this gave him a regular source of green mana. The call of "blue" threw me for a loop though, as I imagine it did the same for Dave. He suspected something was up. On his next turn, he served with the Zombie again and Soul Burned the Quirion Elf. Steve laid a Salt Marsh on his turn, and continued to trade the weenie beats with his mournful Kavu. Steve untapped his Salt Marsh, drew, and tapped all of his lands, and Dave's suspicions were confirmed, as Steve played his bomb: Crosis, the Purger. Yes, Steve was playing five colors. No, he wasn't ecstatic about it, but it was working in this situation, and there was very little that the King of Beatdown could do about it. Crosis ended the game shortly thereafter.

Game One to Steven O'Mahoney-Schwartz.

Price played first in this game as well, and again led with a second turn Dream Thrush. OMS also had a second turn play, a Shivan Zombie. Booster Draft is very much about getting in damage when you can, and the Dream Thrush served for 1, and David played a Sparring Golem. Steve agreed with the attacking policy set forth by the Price administration, and sent his Zombie into the Red Zone. He played a Hooded Kavu and passed the turn. On Price's next turn, he also played a Hooded Kavu, and served with his Golem and bird. Steve played his first pick of the draft - a Blazing Specter, and served with the Specter, the Kavu, and the Zombie. Price traded Kavu with Kavu, and took the rest, discarding a useless mountain. On his next turn, Price grew quickly weary of the Specter, and sent it to the ground in a flaming ball. Steve-O played Yavimaya Barbarian and attacked again. Dave wanted to get damage in, and Soul Burned the Barbarian before sending again. 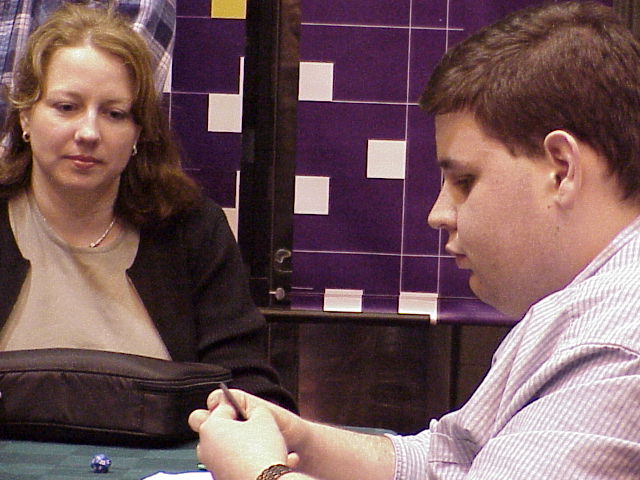 One of the reasons that Steve was playing so many colors is that his first pick was Blazing Specter. His second pick was a Plague Spores. After that, the black and red dried up pretty quickly. He used his second pick to blow away the Dream Thrush and Dave's sole swamp. Dave drew nothing of consequence over the next two turns, and he couldn't do anything (even block) when OMS used Tribal Flames to burn up his Golem, and send in the troops.

The truth about what Magic is about is Dave Price and Steven O'Mahoney-Schwartz. Neither's mood changed from before the match to after the match. Both just enjoyed playing the game, and win or lose, they believe in doing the right thing - which is to just enjoy the game that has earned them so much money.