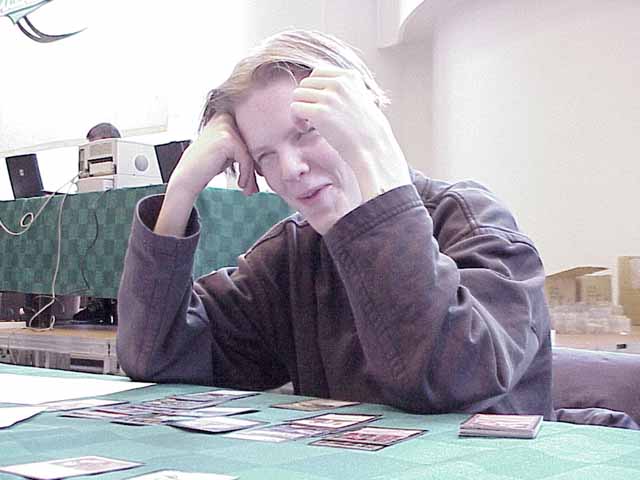 Round 11 and two up and coming European players met each other in a battle to see who could edge that little bit closer to a top 8 slot. Dominik Hothow, from Germany, made the top 8 at the World Championships this year and Florent Jeudon is part of the successful French Team, Black Ops, that won GP Cannes and the Team Challenge in NY earlier this year. Jeudon again chose to draft black/red while Hothow had managed to draft blue/white with 5 creature tappers.

Game 1 was all about the tappers. Land for Jeudon seemed to be slow coming but he was able to deal with Hothow's early threats by first zapping a Samite Archer and then using Exotic Curse on a Glimmering Angel. Hothow was able to cast both of these despite only drawing islands because of a Dream Thrush. Once he lay a Coastal Tower then the Thrush went on a mission to peck. Hothow added a Benalish Trapper to his Stormscape Apprentice and then excluded Jeudon's first real threat, a Trench Wurm. A second Apprentice and second Trapper made a staggering 4 tappers on the table. Jeudon couldn't do anything about this army of tappers, and without blockers even 1/1's were enough to quickly kill him.

Game 2 and Jeudon saw his bombs. Two rats plucked cards from Hothow's hands and again Jeudon was able to deal with early problems, first zapping an Obsidian Acolyte then sending a Glimmering Angel up in Tribal Flames. Hothow was still whittling away Jeudon's life with a Galina's Knight but Jeudon had a Keldon Necropolis on the table and soon would have the mana to use it. Jeudon added to Hothow's problems with a Tsabo's Assassin. The knight quickly got assassinated and Hothow had to hastily cast a Dream Thrush and Benalish Trapper as blockers. When Jeudon came in with a rat and Hooded Kavu Hothow blocked the kavu with both. Jeudon was able to sacrifice the rat to the Necropolis, this equalised the colours in play and so the assassin could remove 1 blocker, allowing the kavu to kill the other without dying. Hothow was on too low life and Jeudon could kill any creature he might cast to block with.

Game 3 and Jeudon quickly found himself on the receiving end of some savage Thrush peckdown. The birds soon had a big 3/3 Fairie Squadron for back up and Jeudon was under pressure. He'd been able to cast a spell every turn from turn 2 onwards but then Hothow made an Obsidian Acolyte to prevent him attacking back across the ground with his much larger Reaper. The early peckdown proved decisive as Hothow was able to attack with all his creatures, take the greater damage when Jeudon came back at him and then Repulse Jeudon's only non-black blocker to come in for lethal damage the following turn. 'Rah for thrush peckdown.