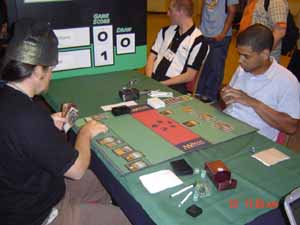 Eric “Danger” Taylor came to the table wearing a jaunty little chapeau, and his attitude matched it. Often times the absent-minded professor of Magic, Taylor has a reputation as a writer of some of the most fundamental articles about the game. He’s also no slouch as a player. He last tasted glory in when he defeated friend and roommate Pat Chapin in the finals of Grand Prix – Milwaukee. This weekend he’s been having a ball casting big spells with Red-White Control. His opponent is Dave Williams, who is continuing a history of strong GP performances this weekend, and is in shooting distance of Top 8 with Zombie Bidding.

Williams started off by swampcycling a Twisted Abomination and then played out a morph.

Taylor played a turn four Temple of the False God and passed the turn. Williams pitched a Festering Goblin to flip up his Putrid Raptor and hit for four, and played a Barren Moor and another Morph. Taylor untapped and played a second Temple, allowing him to sweep the board with Vengeance. Williams pitched Noxious Ghoul to his second Raptor, setting up a big Bidding.

Facing an army of men, Taylor tapped out for Akroma, who sailed over to smack Williams. He took some serious pain, falling to three, put he had a plan. He hit again, and Decreed out a bunch of Soldiers to stop Williams’s next swing. Another Akroma hit put him to two, and a Rift and cycler finished it. 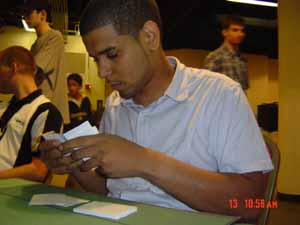 The first action was Williams swampcycling an Abomination and then dropping a morph. Taylor sat on his three mana and waited. Williams hit for four, pitching a Noxious Ghoul and made a Rotlung Reanimator, with Unholy Grotto on the table. He got one more hit in before Taylor could cast a Vengeance. Williams tried a Graveborn Muse. That earned a second Vengeance.

Another Rotlung followed, and Williams was paid back with a visit from Akroma. Fortunately, he had Call to the Grave ready, and Taylor had no Decree of Justice. He lost his legend and played a Rift. Williams smacked him and offered some Head Games. Taylor drew his card for the turn and thought.

“Who draws a cycler there?” - Dave Williams.

Taylor gave it back to Williams, an error considering he could have destroyed the Call to the Grave by Rifting away Williams’s lone zombie on his turn. When he did Rift, it was with Eternal Dragon.

“Who draws THAT cycler there?” – Bob Maher

It was no matter. Williams played a Bidding, getting back six zombies including a Noxious. Taylor failed to draw a wrath, and they were on to game three.

Taylor had to mulligan for the deciding game, and his next six were a little slow. Williams had a quick draw of Withered Wretch and Rotlung Reanimator, and started beating while Taylor cycled. His fourth land was Temple of the False God, and he ate another four. Williams swampcycled an Abomination and played the swamp. 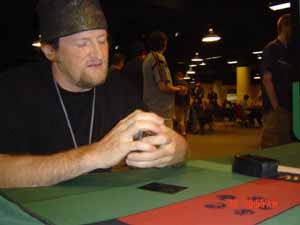 Taylor dropped a mountain and passed it back. He Starstormed away Williams’s incoming team, leaving two tokens behind. Williams followed up with Graveborn Muse and Taylor sent out his Eternal Dragon then untapped and Vengeanced. Williams got in with Withered Wretch. Taylor played Grand Coliseum as his eighth mana. Williams meanwhile ate the Dragon and regrew his Reanimator, then hit for two and played it.

Taylor wasted no time getting Akroma into play and swinging. Williams tried a Call to the Grave, but this time Taylor had the Decree. He made a bunch of men. Williams came back with Noxious Ghoul, forcing Akroma’s sacrifice. That meant that Taylor had to Vengeance again, and Williams was left with two zombies. He regrew his Rotlung and swung for four before playing it.

He just shook his head as Taylor tapped eight again. A second Akroma bashed in. Williams drew and swung with his dudes. Taylor blocked his Reanimator.

“That was the worst block you could possibly have made.” – Dave Williams

Indeed it was. Williams had had only five zombies in the yard, but now that there were six a Patriarch’s Bidding would mean Noxious Ghoul would axe Akroma. He had no Bidding, though, so Taylor was free to shrug and kill him.