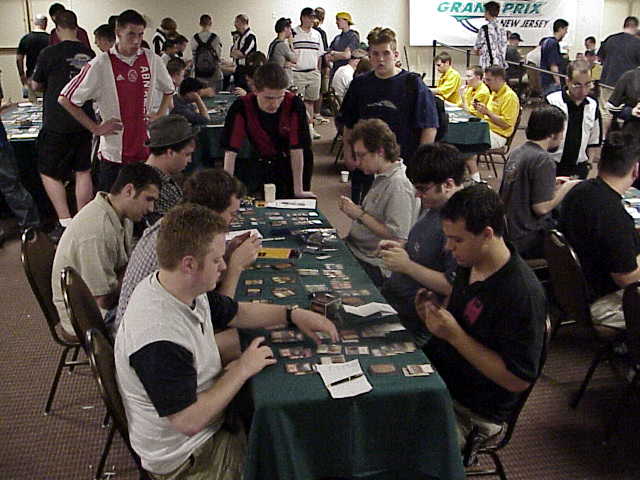 There is a time during every premiere event when the players come to the table to put their hopes and hearts on the line. With one more win ensuring a Top 4, these players had everything to lose, and everything to gain. A win here by either team will put them in the Top 4, and from there, the sky is the limit. For Illuminati, it would be just another trip to the money rounds. For Exhisposition Center, it would be a chance of a lifetime. With so much on the line there is no room for error, no room for mishap, and no second chances. It was truly a matter of sink or swim.

In the center of each team were the two most accomplished players for their respective groups, Zvi Mowshowitz and Tim McKenna. The name Zvi speaks for itself, but few outside of New York know McKenna. With a Grand Prix Top 8 in Montreal, McKenna has show he can play the game. His teammates, Paul Jordan (PJ) and Brian David-Marshall (BDM) have both played on the Tour, and have both been on successful teams before, so their success so far is no fluke. These guys can play.

The run down of the matchups were anything but atypical. BDM against Shvartsman was the blue/black mirror match. Zvi had a monstrosity four color green, against McKenna's green/black deck with a splash of white for Phantom Nishoba. At the ends, PJ and Justin Gary were both white, with red and black respectively. 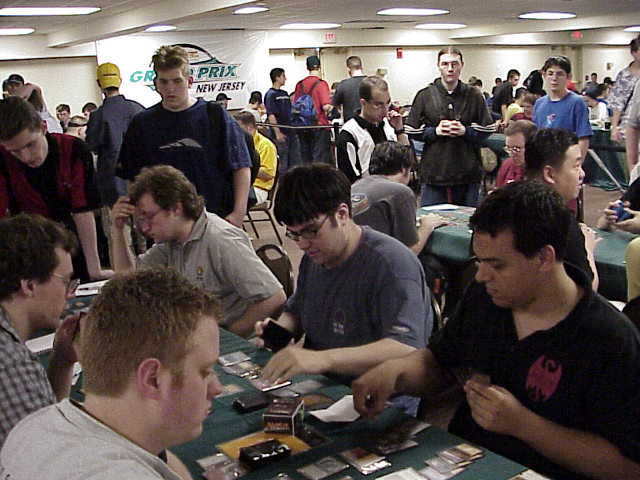 I chose to watch the center match, as it promised lots of savage bashing with monsters, and who doesn't love monsters? In fact, game one was a savage bashing, but only one player really had monsters. Zvi came out blazing fast with Diligent Farmhand and Wild Mongrel, destroyed a Basking Rootwalla with a Crackling Club, and followed up with a Krosan Archer. Meanwhile, McKenna did, well, nothing. He was land flooded, and the game ended before turn ten.

McKenna showed more fight in the second game, leading off with Rootwalla, Nantuko Tracer, Gloomdrifter and Rabid Elephant. Zvi was more than game, sending in the troops: Brawn, double Phantom Tiger, a Wild Mongrel, and two Petravarks. When Chastise removed McKenna's flyer, the game seemed to have completely shifted. Zvi brought the team, swinging with all six monsters, and put a hole in McKenna's hopes by casting Keep Watch. With Brawn in the graveyard the damage threatened to be lethal. McKenna had to use Aven Warcraft to save him from certain death, but Zvi just added an Arrogant Wurm to his pile of creatures, and there was nothing McKenna could do. Match one to Illuminati.

On my left, BDM had just taken a game from Shvartsman by smashing into four 2/2s with a Masked Gorgon. The trick was Psychotic Haze, sending all of Shvartsman's monsters to the graveyard. Plus, Alex's two Filthy Curs, did a good amount to Shvartsman himself. The game ended soon after.

Games two was a bang up, as BDM never got past three mana, so this match came down to a crucial game three. With PJ having won his first game, and having a favorable match up, the Top 4 would come down to the winner of Shvartsman and BDM. 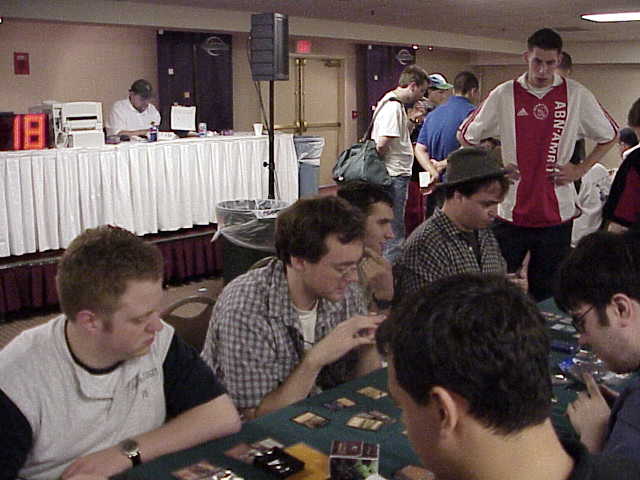 Alex's game was golden, or at least golden for his deck. Starting off with a Filthy Cur against BDM's slower deck is just fine. Enchanting said Filthy Cur with Arcane Teachings is a little bit better than just fine- I would go so far as to say it was perfect. BDM was under extreme pressure, but had to find an answer, digging with Deep Analysis. He dug even deeper when he flashed it back, trying to find some sort of bounce spell. The game seemed to have settled down, and BDM resolved Mesmeric Fiend, taking Shvartsman's Spelljack and letting his Masked Gorgon resolve. Shvartsman had the Repel and BDM was running out of time. A Last Rites was Spelljacked, letting BDM take out a newly summoned Psychatog, but the last card in Shvartsman's hand was Ghostly Wings. A 5/5 flying Filthy Cur is still a 5/5 flying creature, and BDM extended the hand.

Paul Jordan did win his match, but it didn't matter. Once his team had won, Justin Gary was so elated that he made some of the worst plays in history, completely throwing a tight game. It just didn't matter. Illuminati would be going on, and Exhisposition Center would go home with a memory of what could have been. And some rares, of course.

1 Dwell on the Past 1 Brawn