Neither player was very talkative before the beginning of the game and after a few brief pleasantries as John Larkin, freshly returned from his top 8 finish at worlds, faced off in a virtual mirror match against one of the top Polish players Radoslaw Gromko 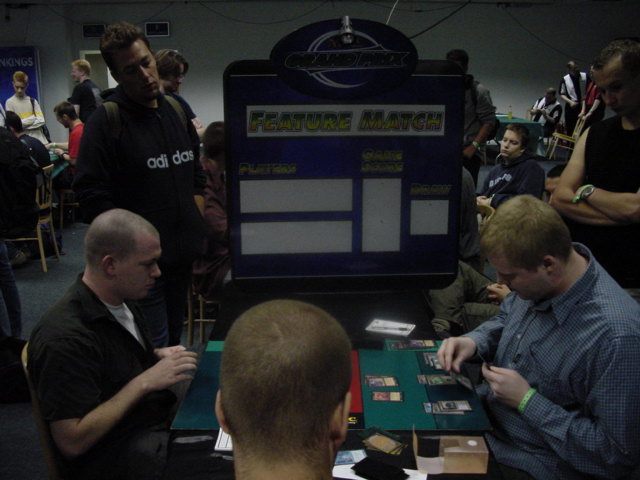 John was unhappy with his opening hand and had to mulligan down to six. Radoslaw on the other hand kept a hand with four swamps double fiend and an edict. Radoslaw made the first play with a turn 2 fiend taking away Johns Envelop. John responded with a turn 2 shade that he had drawn off the top.

On his third turn Radoslaw cast Rancid Earth targeting John’s only swamp, which resolved making John’s Tainted Isle seem quite weak. John’s mana problems were compounded by the fact that his next 3 land drops was also islands. John continued to be unable to make a swamp and looked as if the match was going to end very quickly when Radoslaw made a shade on his seventh turn with 6 swamps on the table. However John was able to Aether Burst both of the fiends at the end of turn and then make a swamp and a Chainer's Edict on his turn snagging the shade. Radoslaw however was able to butcher John’s shade and remake both of his fiends taking away John’s Envelop and Faceless Butcher. 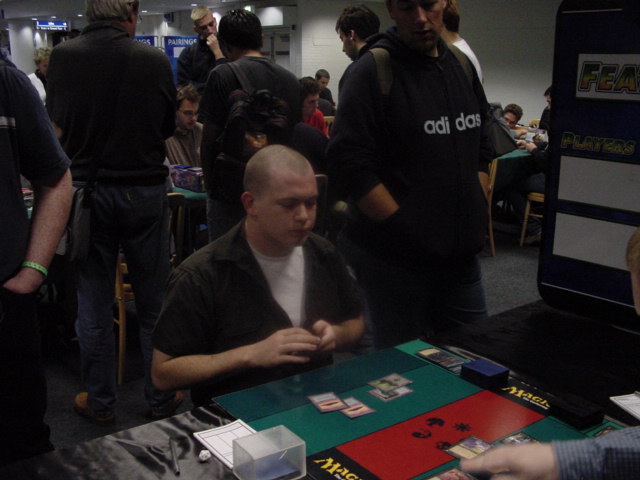 John was able to draw another edict and played it on his turn and Radoslaw thought for quite a while before sacrificing the fiend removing Envelop. John then made a Nantuko Shade on his next turn and looked as if he may be able to get back into the game. Radoslaw however had other ideas and made a Cunning Wish at the end of John’s turn getting Afflict which allowed him to kill the shade and attack John down to six life. Radoslaw further improved his board position by adding a Shadowmage Infiltrator to his side and an Edict on John’s last gasp shade sealed the win.

Larkin played first and made a turn 2 Shade. On his turn Radoslaw made a Fiend revealing Finkel, 2 Shades and a Braids and chose to take one of the Shades. John swung in for 3 and added another Shade to his side of the board. Radoslaw had no turn 3 play and after an edict from Larkin allowed him to add a third Shade things were looking bad for the Pole. Larkin continued to keep up the pressure and even a Cunning Wish for a Psychotic Haze couldn’t stop John from saving two of his Shades and swinging in for the win. 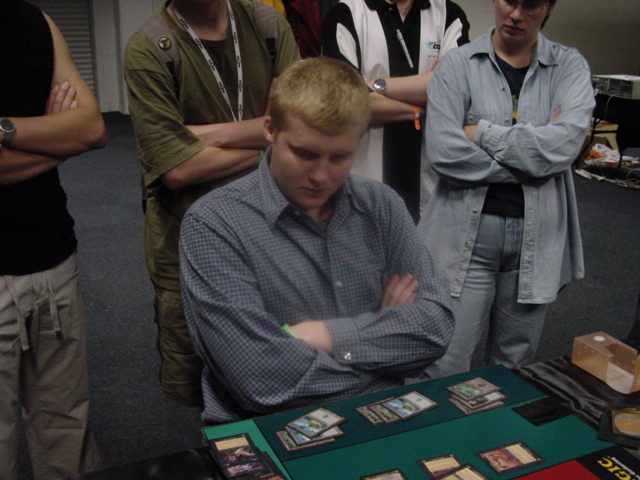 Radoslaw started off game 3 and was unable to make any turn one play but to make a land. Larkin however was able to Therapy naming Mesmeric Fiend and was pleased to see on in his opponent’s hand along with a Shade, a Scrying, a Butcher and a Braids. Both players made turn two shades and when Radoslaw made a turn three fiend he. Found Larkin had two Rancid Earths of which he took one. Larkin took away one of Radical’s swamps. Radoslaw could do nothing on his turn but Scry for one and was able to make a third land and attack for 3. Larkin made an edict on his turn and again Radoslaw pondered before deciding to let his Shade die. John then attacked for two and played his second shade. Radoslaw made a land and passed the turn and when Larkin top decked another Rancid Earth his position looked even worse. Again Radoslaw had no play on his turn and when Larkin edicted again he conceded.